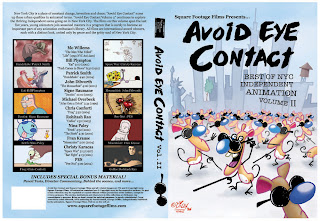 What's the secret to a thriving career as an independent animation filmmaker?

You may have already heard Bill Plympton's three rules for being a successful indie animator. He advises others that wish to follow in his wake (earning a living through his indie films) to make animated films that are: short, cheap, and funny. Of course, there's more to it then that... so, towards the end of fostering an even smarter and savvier NY indie animation scene, I thought I'd round up a list of tips pulled from the masters of the game.

1-Make good films (or at least confident films).
There's no way to get everyone to agree on what is "good" by any standard of judgement... so maybe its more important to produce films with confidence. Confidence is undeniable. Bill Plympton has made so many films by this point that not all of them can be masterpieces, but they ARE all confident works. They all demonstrate his solid chops in creativity, humor, and draftsmanship.

2-Make a lot of films.
Don't stop at one. To continue with the example of Bill Plympton, his dedication to making at least one short a year has helped define him beyond the quality of any one of his films. Most importantly, he is a brand. He is building up a body of work that is stronger than the strengths of even his single strongest film. One indie film does not an indie make. More examples include PES, Signe Baumane, Pat Smith, Andy and Caroline London.

3-Become known for a style.
Is there anyone who could watch a new film by PES, Signe Baumane, Bill Plympton, PES, Pat Smith, Paul Fierlinger, Emily Hubley, or Don Hertzfeldt and not recognize its author? All of these filmmakers have honed an idiosyncratic style that, along with the quantity and quality of their films, helps define their brand. Pat Smith took this one step further with another identity as a fine artist exhibiting and selling in galleries. Note, Pat has a gallery opening this very week: http://www.blendfilms.com/taste.html

I do think its possible to throw out this rule and aim for a wider diversity in personal style and still be a success, but, more often than not, an identifiable brand identity wins the day.

4-Enter a ton of festivals and program your own events as well.
All of the above filmmakers do this and are not shy about getting their work screened. One veteran NY animator recently complained to me about being shut out of the ASIFA-East festival for several years. When I asked him what other festivals he entered, the answer was, "none." Success at the ASIFA-East festival does not an indie career make (I realize I sound like Yoda). If you're not promoting your film, don't complain when others are promoting there's.

All of the above filmmakers are also active in programming some film festivals and hosting some of their own screenings and events. For example, Signe Baumane regularly programs one-shot events wrapped around holidays such as Valentine's Day or around themes such as sex. Why not do the same thing yourself? You can choose Thanksgiving and abstinence as your themes. Set up a screening. Get a venue. Promote it. There's nobody stopping you. All it takes is a little effort on your part to get it off the ground... and then, organizations like ASIFA-East will help you promote it for free...not bad, eh?

5-Make your own DVD compilation.
Again, taking a page from the book of the filmmaker's above (with their Avoid Eye Contact vol.I and II; pictured above), get a collective of like-minded filmmakers together and produce and sell your own compilation DVD. ASIFA chapters around the world will help you spread the word. You can try to interest animation festivals such as Annecy to screen your compilation as they did with Avoid Eye Contact. Again, there's no monopoly on ideas. What worked for others can work for you. I am proud owner of compilations collecting the works of Michael Sporn, John Canemaker, John Schnall, Emily Hubley, George Griffin, The Krause Brothers, Pat Smith, and Signe Baumane.

6-Share your films on-line for free:
PES could be our greatest inspiration in this area. His philosophy has always been to get his work seen by as many people as possible, and the on-line viral success (eatpes.com) of his films from "Roof Sex" to "Game Over" has helped PES grow a worldwide reputation for snappy little films of the highest quality. The visibility has allowed PES to score funding for further indie projects and was instrumental in launching his successful career as a commercial director.

7-Get qualified for the Oscar.
While some of the filmmakers listed here have not yet scored an Oscar nomination, most of them have qualified for an Oscar nomination with every film. Oscar eligibility requires savvy on the filmmaker's part. A top prize at certain festivals will automatically qualify a film, but that is but one way to get on the list. Some indies have been shrewd enough to organize their own Oscar qualifying screenings at specific L.A. theatres, ensuring that their films will be eligible for animation's top prize. There's nothing stopping others from doing the same, on an individual or group basis.

In conclusion:
I have spent the above list focusing on the most active indies working today, but these are by no-means the only indies worth noting. The filmmakers profiled above were not necessarily selected for their artistic contributions to indie animated films (although they have contributed much). I chose them for their almost in-human dedication to making an animated short just about every year, and (most importantly) then promoting the hell of them. The inspiring part for me is how applicable so many of these ideas are to upcoming indie animators as well as to established indies wishing to learn a few new tricks.
Posted by David B. Levy at 12:01 AM

All good points, David. I would add that we should be making films for a general audience, not simply other animators or fans. The field is too incestuous and if somebody is really trying to make independence economically viable, the larger the audience, the greater the possibilities.

This doesn't imply watering down individual vision to make it more "commercial," but it does imply looking for venues beyond festivals.

Wow, incredible advice!! I'm tempted to print this out and tape it to my wall for motivation!

Putting on events is great in a lot of ways- it gets your name out there and it's good to show films that will inspire others and nurture the whole scene. You're so right, that there's nothing stopping people from putting on their own events! I was considering writing a blog post about how to put on a film screening...

Recently we've had some animation-related events (PSST! 3 last Wednesday and "Monster Road", coming up) put together by folks not directly related to ASIFA-Atlanta, and I am more than happy to promote these through our organization. I love it when people put things together like this!

I would caution filmmakers to make sure that events planning doesn't interfere with filmmaking. Events are very rewarding in themselves, but remember to put time into films, too! Maybe most people are better about this than me :)

Oh yes, and to add another good example to #6, I can't believe how many people saw "MUTO" online! People are still sending it to me saying "wow, look at this!" :)

I have to say, however, I am a little mixed about the part of developing a style audiences can recognize. I understand an audience becoming a fan of that style, but doesn't that also hinder the artist/filmmaker in some way to work in one style.

One thing the recent ASIFA-East screenings showed, I think, was the incredible value of doing something small and doing it really well.
Alan Foreman and Adam Ansorge both made audience favorites that were entertaining, a welcome relief (almost like a brilliant ad break) and were under 2 minutes.
For film makers struggling for something to make, it's a really, REALLY good way to start.

Mark,
I couldn't agree more. But, I see the problem you describe come up more often in student films. Some student films are filled with inside jokes and references that only other students and friends of theirs will know. That's always a mistake.

Brett,
I love all the great screenings work you are all doing in the Atlanta area... keep it up! You're doing a huge service. I will check out MUTO.

Emmett,
I don't think working in a similar style from film to film hinders the filmmakers. If this is the vision they have, who is to say that they are wrong? That's the whole point of the word, "indie." You are free to choose your own path... but, I think from a branding point of view, having a recognizable style is a major asset.

Elliot,
Short or long, animation has to grip an audience. Short has an advantage, clearly...
And, I like your advice that short is a good place to start, especially for someone struggling with the idea of making their first "indie" film. I don't count students that make films as filmmakers until they make their first post-graduate films.

I think a lot of younger film makers/graduates tend to place great importance on doing something "worthy".
This worthiness becomes the major part of production and overwhelms everything else.
The film goes nowhere...

Making something short has so many advantages:
* You learn how to animate better in small steps.
* They play really, really well online.
* You have the chance to explore a theme.
* You can make more of them.
* You really learn about timing.
* You can make a series. Always an attractive package.