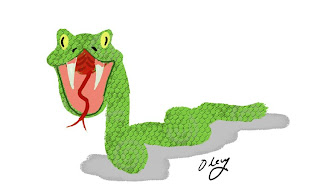 When I started working at Nickelodeon, my first experience on a series production, I was struggling to master my job and stay on schedule. So I came in early for a few days to get a leg up on the work. One of those mornings, an animator 10 years older than me came by my desk and warned me how foolish I was to give the series extra time and effort. In his eyes, the company didn't deserve it and if I continued to do this, I was a sucker. I decided not to call him out on being early himself and instead explained that I was only putting in a little extra time until I got a handle on the job. He still shook his head as if I was making a huge mistake. Then he said some very unkind things about the production and its leaders. He was a very bitter employee who quit the production very soon thereafter.

Another employee kept taking me out for coffee to complain about the production, ranting that nobody knew what they were doing. These encounters made me sad because I had started this job with such excitement. Although I was new to this production and only two and half years into my career at that time, I had the suspicion that the anger and frustration I was hearing had little to do with the series. There is no single way to react to any workplace situation. I found that in most cases the problems had to do with the individuals own inability to properly communicate or collaborate with others. A more rational person would have understood that because the production was one of the first digital in-house animated series in its first season, it was still working through its natural growing pains.

I remember a meeting with the creators/producers where the bitter employee who liked to take me on those "coffee walks" exploded into a rage over being asked to move a couple of characters a few pixels to the right. He slammed his palm on a TV monitor and shouted at the creators. There was no good reason why the characters couldn't be nudged over so this employee's reaction was way out of proportion. In fact, he quit the production a few weeks later.

Since my time on this series, I've worked on a half dozen more while also having the benefit of hearing about work conditions on other series produced elsewhere. The conditions at this first series stack up very well against the best situations I have personally experienced or heard about. More evidence that these negative people were primarily projecting their own inner demons on the young and well-meaning production. Certainly there have been conditions in this town that have been worth such a negative reaction and beyond, so by no means I am suggesting that every situation can be made workable simply by holding a good attitude.

The bottom line is that despite the efforts of these misguided mentors, I didn't become disenchanted with the production. In those important first weeks, I was too busy learning my job, which included my first experience working on a Mac. I tried to be a sponge soaking up all the technical and creative nuances of the show, which were taught to me by the many talented and terrific artists on the staff. By the end of those eventful first two weeks, the producers called me into their office and surprised me with a $100 a week raise. It was such a victory over negativity, and it showed me that (under agreeable circumstances) each employee can define his or her own experience on a job.
Posted by David B. Levy at 6:04 PM

Through long personal experience, I have discovered that there are only three rational ways to deal with unhappiness on a job.

1. Try to get the problem fixed, whether you do it yourself or request that someone else do it.

2. Make the best of the situation as it is.

I've also learned that if you've tried to get a problem fixed twice and nothing has resulted, the problem is never going to be fixed. That leaves you with options 2 or 3.

Being unhappy or complaining is a waste of energy and makes it hard to be at work. I'm not perfect and sometimes backslide into grousing, but I try to avoid it as I've learned that it's totally unproductive.

Well said, Mark. And at the production I described there were those that were not wise (or financially) able to quit when they became miserable...so they just lingered and made the rest of us miserable. They did so at the very real cost to their own reputations, of course.

I'm far from perfect myself and can count many times when I became negative and risked damaging important relationships. I have learned to own those mistakes and apply them forward. This leaves me room to make new different mistakes! : )

Thanks for posting this, Dave! I completely agree. While we can all find ourselves being negative on the job from time to time, it's never a good feeling to cultivate and let fester. Negative energy spreads, whether directly or indirectly, and can affect an entire production. There are times when I have to avoid or ignore certain people because the anger and bitterness is just too much.

Not all criticisms are bad, of course, and I think we both know from experience what good can come from tackling problems head on. We've all learned lessons along the way, and we're all the better for it! Every day is a new learning experience.

I would go a step further, presenting another side of the coin, and say that it's in a studio's best interests to create a happy work environment. Specifically one in which real problems are addressed and worked on. No studio is perfect by any means, but unhealthy work environments have a way of breeding negativity amongst entire staffs, and those studios can become tough places to work in. If we can all find ways of working together to solve both our problems and the companies problems, I think it would go a long way towards healthy, happy, and productive staffs.

Dayna, you have the perfect attitude.... and I couldn't agree more.

The thing that bugged me so much in my story was that a few negative people were actively trying to recruit me (a new hire) to their cause. They were trying to rob me of forming my own opinion. I really resent that.

I had meant to share a story of my dad's from his days in advertising. Each afternoon (like clockwork) a work friend used to stop by his office and bitch/gossip/and complain. This happened every single day. One day, my dad felt suddenly lighter and happier. At the end of the day he finally realized why. The negative person was on vacation and therefore wasn't able to stop by for a "visit."

For a very long time I worked incredible long, busy hours for a studio back home.
The place had more of a cult atmosphere than that of a work place.
All we did all day long was complain about how much we hated it there.
One day, I was kicking back, drinking beers with my best mate who also worked there and we realised that the office was the ONLY THING WE EVER TALKED ABOUT!
The ONLY THING!
How crazy is that.
After this realisation we vowed to never discuss the place out of the office again and never did.

The end of this story is that we were both fired : )

Man, your blog has got to be the best & most inspiring & INFORMATIVE out there. Thanks!

Thanks, Corey.. that's very kind of you. Glad you enjoy the blog.