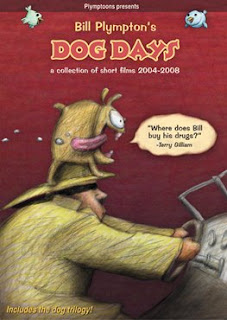 I admit that I was skeptical upon receiving Bill Plympton's new DVD shorts compilation "Dog Days." The collection (packed with bonus features such as animatics, pencil tests, commentary, and sponsored work) features Bill's seven independent shorts made between the years 2004 through 2009. I was skeptical, in part because like many animation folk, I run the risk of taking Bill's films for granted. He has done so much excellent work for such a long time and has received so much success in return that it's easy to overlook his last five years of shorts and make the assumption that his best work is long behind him.

For decades the trajectory of the traditional animation artist was supposed to be a suffering creature, one who toils away for a lifetime in obscurity, working on other people's projects, and perhaps taking a victory bow in his last years. When Bill arrived on the animation scene in the mid-1980s, he followed a far less traveled path: the animation artist who is not only devoted to his craft but also organizes his commercial life to work on independent projects, becomes known in the industry as a singular brand, and through an uncanny gift for business and self-promotion achieves fame and success for his efforts.

One factor that unfairly weighs against any serious discussion of Bill's work is the fact that he's still producing work. Animation artists are quick to share an opinion on the work of living artists in private over drinks, but very few of us are willing to publicly offer intelligent commentary. It's far safer to write about what Freddie Moore liked to eat for lunch at the Disney commissary than it is to offer serious discussion on the latest Plympton short. That's a real pity because, while there have been a few misfires, several of Bill's films from 2004 to 2008 have been among his best work.

I am tempted to describe Bill's recent commissioned work, the music video "Mexican Standoff," as one of those misfires in that it can appear to be an average work. But as soon as I think that, I correct myself: Average for whom? The film is full of innovative camera angles, daring animation, and enough style and ideas for 10 films. I wonder if one price Bill has paid for his productivity might be that we've become accustomed to his ordinary excellence. If we had never seen a Bill Plympton film before and started with "Mexican Standoff," we might be asking, "Who did that terrific animation?" But, the value of the "Dog Days" collection is that it answers that injustice by forcing the viewer to look at this five-year period of Bill's work as a whole.

"Dog Days" features such excellent films as "Guard Dog" (the first in his dog series), the children's film "The Fan and the Flower," the experiment in animated film noir "Shuteye Hotel," and the faux newsreel charmer "Santa: The Fascist Years." Two other dog films round out the program and (taken as a trilogy) it's interesting to see how Bill applied different techniques on each film in that series. The drawing style seemed to tighten up in the second film, only to loosen up in the third. Viewing the three films in a row, I noticed that the held poses which helped make the first dog film so much fun (remember the poses struck by the karate bird?) were largely abandoned in the sequels. I miss that level of confidence (or experimentation) in the subsequent dog films, although I'd add that "Hot Dog" stands on its own as an enjoyable film. The fourth and least successful Dog film, "Horn Dog," was not included in this compilation.

Like any series, the Dog films face the danger of becoming a one-note joke, growing staler with each outing. While the first two dog sequels still offer up laugh-worthy gags, they just don't have the mojo that powered the original film. Bill reveals on the DVD commentary track that "Guard Dog" was inspired by his observation of a dog barking at a helpless bird in Madison Square Park. I think the film that resulted showed that spark of creation based in personal experience and truth. The inspiration for the sequel films may owe less to true experience and more to knowing that audiences liked the first dog film, and that lack of authenticity is hard to shake.

Don't get me wrong, I don't presume that Bill's sole motivation on the Dog films was to capitalize on the first film's success. I think the idea of creating a successful recurring character is what has kept this series alive. The series format (which requires a character-based approach to storytelling) is uncharted water for Bill, leading one to conclude that the challenge of succeeding in this new arena might be a major source of inspiration, much like the challenge of making a successful animated feature motivates Bill towards that goal.

At this point in time, Bill Plympton is far from the new kid on the block, but he is also far from being irrelevant. One of his continuing gifts to this community is demonstrating how, despite unprecedented success, he is able to stay artistically hungry. "Dog Days" offers ample proof to believers and non-believers alike.
Posted by David B. Levy at 3:59 PM

How funny you should post this.
Bill asked me to review the DVD for the The Exposure Sheet and I just got around to watching it this weekend.

Exposure sheet is only for event reportage.. but, I'd love you to share your thoughts here.

Well in that case, I shan't write it up.

As for the DVD.
You have to admire someone who gets to make a living off the very specific thing they like to do.
There are a few deviations from the usual "look" of his work - some 3D in Shuteye Hotel and the black and white lineart of The Fan and the Flower come to mind - and I like that.

I think this collections lacks the wit and invention of earlier work.
The best, I think is Santa Claus: The Fascist Years, which is a hilarious and Mexican Standoff, which has some Bills finest drawings.

Of all the Dog films I like Hot Dog the most.
It feels like it's been made with more care and I think the drawings are better than in the other two.
The dog is more charming here too and it's better film making.

I love these dog films. I have fond memories of scanning in all his drawings, cleaning in PotatoChop, and compositing w/AE Bill's first digital film in my apartment. -Very exciting to see if his artwork would look good from a computer vs. film camera (gulp). I'm so glad "Guard Dog" was an Oscar nominee and continues to be a success! Thumbs up!

Animation artists are quick to share an opinion on the work of living artists in private over drinks, but very few of us are willing to publicly offer intelligent commentary.

I think that's true even for your review, here.
I'd started to air my thoughts about some of the work but felt it wasn't completely fair and pulled it (not that it was all bad).

Bill is a model of the Independently financed animator pushing through the poverty of the landscape to make a great body of work. It's hard to tear that down in print or post. One feels more the obligation to praise him.

I can say that Guard Dog was one of his most brilliantly realized films. Intelligent as well as hilarious. Others in the series are a chance to milk the sales of the character, but Bill has forgotten who that original character was. A caricature of a real animal has been turned into a cartoon character. A real let down for me. Anything for a joke has never been my taste. I prefer humor out of situations and characterizations. When Bill does that, and he does it well, his work is of the highest calibre.

Well said, Michael. I feel the obligation to praise Bill too, simply out of respect for his achievements, prowess, and artistry.

I think both Bill's strength and weakness are his beginnings as an illustrator. That gave him a unique point of view in indie animated film, but it also limited his understanding of film as a frame-based medium of time. But, I sense this mystique still intrigues Bill and is one of his motivators. I know he deeply respects more traditional animators who have a different type of mastery over this craft than he does.

I think the first Guard Dog was brilliant as well. One of his best works. And, you just can't beat the ending of the sad dog dragging away its dead master into the sunset.