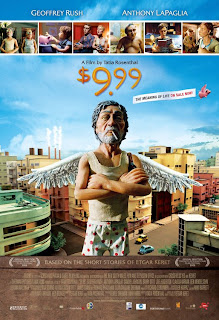 There never seems to be a loss for New York-based animation topics to write about and this Monday is no different.

In September 2008, ASIFA-East began its season of events with a special panel spotlighting NYC-based independent animated features. The panel was made of up Bill Plympton, Emily Hubley, Tatia Rosenthal, Dan Kanemoto, and Michael Sporn. Noticeably absent was Nina Paley, who had been invited, but was out of town. Much of the panel discussion, moderated by Amid Amidi, centered around funding and distribution instead of the creative challenges of making an animated feature. Given the difficulty indie animated features have in getting distribution and a theatrical release, I think that focus was justified. Anyone can start an animated feature, but far fewer have the tenacity or talent to pull one off, and even less will be able to score a theatrical release. The problem is two fold. On one hand, animators are used to making small films, of which they own the complete copyright. Some animators transitioning into features bring that same need for control they enjoy with their shorts. The problem is that for a feature film to reach a wide audience (beyond the world's animation community), it requires funding and distribution partners, and that results in losing or sharing ownership of your film.

One filmmaker who did give up the ownership of her film was Tatia Rosenthal, and the results of that sacrifice (along with 9 years of production) was the NY theatrical-run debut of her feature, "9.99," which is now playing at the Sunshine Landmark Theatre on Houston Street. I urge anyone who cares about animated film to see her film and show their support. It's a rare thing for an indie animated feature to secure world-wide theatrical distribution, and its even more rare for such a feature to be truly for adults. Despite Pixar and Disney's limitless resources of money and available talent, they are in the business of making main stream animated features. In North America, this means family/children's films. You won't see Pixar or Disney (or Dreamworks or Blue Sky) making films outside of the box of general audience viewing. That would be a true creative and financial risk, that would go far beyond inventing a new process to animate underwater effects or fur. So, if one want's to see animated features grow up the way live-action films have been doing for the last 100 years, they should stop micro analyzing "Up," and start discussing, "9.99."

Important animated feature films are so few and far between that we could be tempted to like them just to support their existence. Happily, "9.99," stands on its own stop-motion feet and doesn't require your approval. It earns it instead. Something interesting happened as I watching Tatia's film. There's a scene (spoiler alert) where it looks like a father is about to smash his son's beloved piggy-bank with a hammer. The son's bond with his piggy-bank was something that built over the course of the film, culminating with a lovely scene where the boy brings the pig to show-and-tell. The little bank became an object of unconditional love for the boy because the pig continues to smile whether the boy puts a coin in it or not. When the moment comes where his father is set to smash it, I jumped in my seat and heard exclamations from many others in the audience.

"9.99" has many such moments and is populated with every-day characters that make a deep emotional connection without succumbing to cliches. There's the loneliness of the old man, the unhappy father of two young men drifting through life, the sophicating relationship between the boy with the piggy-bank and his father, the super model who inspires and requires total submission from her lovers, the young-man struggling to stay a kid despite the demands of an adult relationship, and the vagabond angel more concerned with his own base needs than he is positively effecting people's lives.

This an ensemble film akin to the live action film, "Magnolia," but managing to score higher because of animation's ability to mix abstract ideas with reality. When frogs rained down in "Magnolia," it was an impossible moment violating an otherwise straightforward film's rules. "9.99," uses animation to its advantage without having to justify its choice to be an animated film at every turn. For and foremost, Tatia Rosenthal wisely uses animation as an editor, since animation is about choices (what to leave in and what to leave out.). In a live action film there is much that is simply just there because of where a camera happens to be set up. When the little boy stares at a wanted action figure displayed in a store window, there is nothing else in the scene that might distract from that moment. While based in reality, "9.99's" makes effective use of surreal and fantastical characters and situations and fully justifies its choice of animation as its medium. And, like all effective storytelling, the medium starts to vanish as the audience becomes engaged.

The worst feature animation we usually see is about movement, not feeling. Tatia Rosenthal described her film as a "one-take production" because of the budgetary limitations, and to my eyes, this became a key strength of the film, which was not able to wallow in the overuse of settles, squashes, movement in arcs, and followthrough that muck up a film like "Coraline." Can't a character simply pick up a salt shaker without a sweeping arc, overshoot, and settle? The answer is ,"yes," and most importantly the elimination of these annoying and unnecessary flourishes might just be what defines the look of "Adult" animation.

The morning after we saw "9.99," my wife and I both woke up with a key shocking sequence of the movie in our head's. We just couldn't shake it. It's now days later and there's still a place in my brain where that sequence sits. I had the same experience after No Country for Old Men, Dillinger is Dead, Betty Blue, Claire's Knee, and any number of other live action films. There will always be a steady buffet of "Kung Fu Panda," "Ice Age," and "Toy Story" to feast on, but at the end of the day those are just empty calories. "9.99," is a meal. See it and have an important animated feature to digest for a change.
Posted by David B. Levy at 1:47 PM

I had the same reaction to the piggy bank and found it interesting that the only emotional connection I made to the film was with the one character who wasn't animated.

It's an interesting piece of work though.

Hi ROC,
I think the characters/emotions were all stylistically underplayed in a consistent way, but that didn't get in the way with my emotional connection to them. But, I can see how that treatment of the writing/acting could be an obstacle for some... and, I think that is some cause for celebration.

I'm so sick of the mainstream animated feature and its easy surface characters. In those films villains still twirl their mustaches as if the vaudeville days had never ended. And, somehow a whole industry of feature animation got hijacked by that approach. There's a section of Eric Goldberg's animation book where he speaks of "name that tune" style animation. That's what is used in the mainstream feature. They want the audience to feel the emotion in one drawing. And, perhaps that's what the Disney animators feel they need to do to salvage the scripts they get. But, life is not that way and if the so-called "Illusion of life," is what Disney animators are after, they took the wrong turn ages ago.

Its a shame that animation is not used to convey or exaggerate the subtle things that shade a character. Instead, the "name that tune" school of animation seeks to create a blinking neon sign that shouts, "He's the villain!"

"Can't a character simply pick up a salt shaker without a sweeping arc, overshoot, and settle? The answer is ,'yes,' "

Of course it CAN do it and often does. That doesn't make it good animation; it just makes it movement. Tatia has an underplayed style, but most of the animation is, in many ways, untrained in the style of all those clay animated films of the 70's. The story, the editing and the voices carry the film through its emotional strengths. I'm not sure how much the animation adds.
ALL good movement, alive or animated, has a "sweeping arc and a settle" the overshoot is generally cartoon.

I'd argue that in a film like Tatia's, the animation is adding something simply by not drawing attention to itself. Yet, at the same time, I don't think the film would have worked nearly as well as a live action project. That is a pretty tight rope to walk, but I believe 9.99 pulled it off.

The best animated features begin with an audience knowing they are watching animation, which is the film's technique, but then the audience is supposed to get absorbed in the film and forget the technique. I couldn't do that in a film such as Coraline because it had moments that nearly screamed, "look at me grab this door knob!" I just don't need those mundane moments telegraphed that way.

I didn't find myself questioning any of those choices when I watched 9.99. But, granted, this is a personal view of mine and one I can't assume would be shared by all.