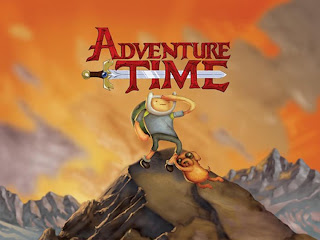 Most everyone agrees that "Adventure Time" by Pen Ward (pictured above, and created for Frederator's Nickelodeon shorts initiative Random Cartoons) was one of the best animated pilots in recent memory. The resulting "Adventure Time" series eventually found a home at Nick rival Cartoon Network after the original network failed to understand the short's potential. I know what you're thinking: Familiar situation. Another case of shortsighted development executives not understanding something good right under their noses. But, in this case, there's one big problem with that theory—development executives were not alone in their concern about the series. In fact, they had unlikely allies: animation artists. Once it became known that Cartoon Network was launching an "Adventure Time" series, I heard many animators remark online and in conversation, "That will be very hard to write," or, "That won't translate to a series." There must have been Nickelodeon executives who felt the same. This begs the question, What about "Adventure Time" made people question being able to make it a series? I think the quickest way to answer that is to first discuss what it had in common with other series.

Since 1991 (and the launch of Nicktoons), TV animation has been mostly a creator-driven affair. The whole point is that each creator will have a unique vision for their series, characters, and world they are creating. The creator-driven series is really a character-driven beast since characters are the reason we keep tuning in to watch episode after episode. On the creator-driven character-based front, Pen Ward had it covered. He had a unique vision that was clearly in support of his main characters, Pen and Jake. On this first criterion, "Adventure Time" is business-as-usual, and that's a good thing!

But, characters are only interesting if stories come from them. In theory, a story line used on "Codename: Kids Next Door" should not work for "SpongeBob SquarePants." Stories need to come from the character's own idiosyncrasies or specific interactions with the other characters or aspects of their world. Of course, there are only a few basic story premises in the world, but within the animated episodic cartoon series there can be an infinite amount of clever variation on those stories. These variations will inevitably come from character. Again, "Adventure Time" fits this mold.

On the surface, Pen Ward's short might seem as if it’s one non sequitur after another, randomly breezing through its plot. In actuality, the characters work within a basic time-tested structure: we meet the characters and get to know them, they become involved in a problem or a quest, they go off on their journey, they encounter obstacles, the hero confronts the villain, the day is saved, and things leave off ready for another adventure to begin. Just because characters have interesting speech patterns or quirky phrases such as, "Algebraic," it doesn't mean that the short doesn't have a structure or leave a path subsequent episodes can follow.

Finally, the short was funny, cartoony, action-packed, skewed towards boys without alienating girls, and was popular with its target audience (kids ages 8-12), while capturing the interest of older viewers. Those are all things that most cartoon-making networks CLAIM to be interested in.

So, what was so different about "Adventure Time" that had some development executives and animation artists doubting its ability to transition from successful short to successful series?

I'm not certain I know the answer to this. Aesthetically, "Adventure Time" had a modern outsider look that had more in common with indie comics than it did with the retro-modern UPA-meets-Cal Arts style that we have seen in shows from "The Power Puff Girls" to "The Fairly Odd Parents." But, perhaps the most significant feature of "Adventure Time" is that its characters live in a semi-surreal landscape inhabited by an Ice King, a Princess, and a Rainicorn (a combination of a rainbow and a unicorn). Oh, and there's a moment of physic connection between Pen and Abe Lincoln on Mars.

Development executives and like-minded animation artists may have noticed that in "Adventure Time" we don't have the NORMAL kid-context for the main character, Pen. Does he go to school? Does he live at home with a family? Most middle of the road cartoons use both as a familiar anchor. In fact, I've often wondered if the boating school that SpongeBob attends wasn't the result of a network executive insisting that SpongeBob have some kind of school experience, even though the yellow sponge was a "adult," living alone and working a full-time job.

On school and home-life, I'm certain that Pen and his crew (in expanding his show to series) must have figured out at least a home base for the two characters, even if it isn't a traditional home. But, the key point of this blog entry is that development executives and animation artists who have expressed doubt about "Adventure Time" ought to know better. All the important shows on television ("Seinfeld," "MadMen," "The Simpsons," etc.) brought a touch of new perspective to otherwise familiar formulas of episodic television. Consider the NEW element in "Adventure Time" to be the creator's vision of a sweetly exciting semi-surreal world of adventure. After that, to corrupt a phrase by Bill Clinton, "It's the characters, stupid."
Posted by David B. Levy at 11:30 AM

From the pilot, I would say both Nickelodeon and Cartoon Network made the right decisions.

"Adventure Time" may not have been a good fit for Nickelodeon -what the network wants to program, how they package and market their shows.

It seems like a much better fit for Cartoon Network -which can take risks on "little" shows like this without the fear of failure that Nickelodeon has. They also connect to a smaller, yet more eclectic audience. The chance for success is greater than it would be as a lead in to the Jonas Brothers.

I'm sure you've said it before, finding an outlet for your property is about finding the right match. I don't begrudge the Viacom execs for passing on this show if they didn't feel that it was the right fit for their channel.

Of course, sometimes networks are incredibly wrong -but the reasoning for that belongs, I'm sure, to a whole other post.

I've just watched Adventure Time and it is unbelievabley funny. I laughed out loud at so many moments purely because it's surprising and new. I read a quote recently saying, "don't worry about people stealing your ideas, if it's truly original you'll have to ram it down their throats"

It's just a shame that the series was locked-up for two years while Nickelodeon held the exclusive rights. That's a long time for a series, especially when somebody else is willing to broadcast it.

I don't know the specifics of this case, Charles, but the standard development deal gives a "buy back" option.

If the creator re-pays the cost of the pilot, they re-gain the rights to the show. If not, there's a timeline (measured in 'cycles', two years seems about right) for them to get it back without paying.

Nickelodeon would rather sell back the rights and break even than sit on a project for two years and lose money.

Hi Richard,
I agree with your points completely.

My key point is that certain aspects of "Adventure Time" may have been magnified out of proportion by cautious execs and animation artists who failed to see the pilot's familiar structure and traditional emphasis on character.

I find it odd that there's been a backlash from animators.
How strange.
What a miserable bunch we can be...
That Adventure Time is even being made is just about the only reason I can think of to have some faith in commercial television animation.

It does make me sad, Elliot. A similar backlash from some animators greeted Super Jail. Albeit, that show is not for everyone (subject matter-wise), but certainly it expanded the vocabulary of what an animated television series could be.

There's no way to please everyone, but it is a pity that so many of us are close-minded and can't see the value of something that might be beyond one's personal taste. That type of unfair criticism doesn't harm mediums such as live action because live action already has a HUGE range of subject matter, styles, and audiences. Animation is light years behind that.

Animation artists should be the first ones heralding important steps that might grow our industry and art in the right direction.

How much animation can you say is out-and-out unique these days?

How can something be so wonderfully strange and yet it's so easy to relate to the characters? I can't remember the last time something came along that felt as if it was so close to the creator's heart. I got that instantly, the first time I watched it.

AT is funny, entertaining, warm and refreshing. It's look and animation fits it's vision perfectly. And I think it came along at a time when TV animation needed a little nudge, especially from a visual perspective.

I'll be cheering for Adventure Time from the first row as it goes from legendary pilot to full-fledged series.

From where I'm standin, I think it's gonna be a success. :)

Hi,
I am The assistant editor with anxiety.net. I really liked your site and I am interested in building a relationship with your site. We want to spread public awareness. I hope you can help me out. Your site is a very useful resource.

Please email me back with your URl in subject line to take a step ahead and to avoid spam.