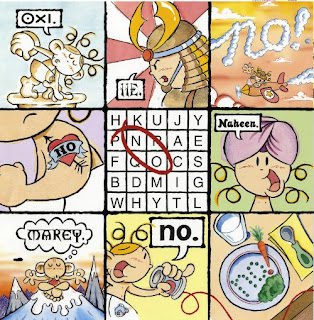 *above image from Mr. Warburton's first children's book, 1000 Times No.

Some time back, there was a controversy in the animation blogworld when it was announced that Brad Bird's next project was going to be a live action film. Brad Bird is but one man, but, because of his singular talents, others assigned him the responsibility of being animation's savior. Post-"Ratatouille," when Bird's career led him away from animation, he was seen by some as betraying the community.

These misguided attitudes remind me of a great exchange between Bart and Comic Book Guy in the season-eight episode of "The Simpsons," "The Itchy & Scratchy & Poochie Show," after the debut of the soulless character Poochie:
Comic Book Guy: As a loyal viewer, I feel they owe me.
Bart Simpson: What? They've given you thousands of hours of entertainment for free. What could they possibly owe you? I mean, if anything, you owe them.

So, because Brad Bird made some of our favorite TV and theatrical animation, some of us think it means we have a right to complain if he should decide to continue his career as he sees fit. I can't think of more juvenile and misguided industry opinion to hold. Be it Brad Bird or someone just out of school, each artist has a right to pursue his own path. It strikes me as absurd that there are artists who hold such warped opinions, assuming that they have a say over a stranger's most important creative choices. I have a rule of thumb that I use when I am tempted to second guess somebody else's life choices: I wouldn't know what someone else should have for lunch so why should I choose someone's career path?

But, this post is not really about Brad Bird. The New York animation community just bid adieu to one of its most celebrated members—Mr. Tom Warburton, who is off to the next chapter of his career in Los Angeles. Most know him as the happy-go-lucky guy who created Cartoon Network's long running series, “Codename: Kids Next Door.” Warburton began his career in animation in 1990, lending his talents to such studios as Buzzco Associates, Inc., Jumbo, J.J. Sedelmaier, and Curious Pictures, before landing his own pilots, series, and children's book. While one could admire him just based on his accomplishments, to know him is to know that his contribution to New York animation goes far beyond that.

In a very real way, Warburton can't leave, because his influence and example are here to stay. Here's a man who honed his skills, developed as a writer and an artist, and understood the importance of building valuable relationships in the community. And no matter how successful he became (and I consider having a six-season run on Cartoon Network to be a sign of success), he ALWAYS had time for the rest of us. And it was as if the busier he got, the more fun he made it look. His confidence encourages others to pitch shows, write a children's book, and to (most importantly) handle all the pressures of this business with grace.

A key aspect of Warburton's personality can be seen in how he prepared his successful TV pitches. Most creators develop what they hope is just enough to entice an executive to take a chance on their show. Warburton couldn't stop there––he made lavish pitch books filled with punchy text and colorful illustrations bringing his shows to vivid life, long before any executives pulled the trigger. His natural setting is to NOT hold anything back. I think this shows his trust in his own talent and his belief that to try with all your might is its own reward.

Most significantly, when he succeeded, it was a gain for the entire New York animation community in the form of one of the longest running productions in local animation history, employing many talented artists and nurturing dozens of new comers.

Much like Brad Bird, Tom Warburton was not responsible for single-handedly supporting an animation scene. But, there's no denying that he is a symbol of what is possible in New York for someone as open, enthusiastic, ambitious, and talented as he. If I could take the liberty of speaking for the New York animation community for a moment, I'd like to say to him, "Tom, who?" Just kidding. I'd say, "Mr. Warburton, you left your mark on this town and we're all the better for it. And, you'll ALWAYS be a part of our family. We'll just have to settle for your blog and Facebook updates for our Warburton fix. Now, go on...kick some L.A. animation ass, and make us proud all over again."
Posted by David B. Levy at 1:51 PM

Tom cleared out his office at Curious the day I started there.
Coincidence?...

He will be missed. Who will host the Asifa East Auction now?! I'll throw my hat in.

I've been hearing about a few other New Yorkers looking to leave New York (I won't say who in case I am wrong). But in this current state of financial imbalance, its really no surprise.

Brad Bird is an adult, a success, and two-time Oscar winner. He's earned the right now to make his own career choices, even if those choices don't pay off right away. Last I heard, Bird's live-action venture was in limbo, because of budget issues.

I never got the chance to know Mr. Warburton, but I do know how supportive he was of the New York animation scene. I know that many of us do not want to abandon the New York scene, and help it thrive. But the economy hasn't really been on everyone's side. If moving to Los Angeles will keep Mr. Warburton on his feet, than go long Mr. Warburton, and do great things.

and, I'd add that for someone of Mr. Warburton's stature, it can actually limit the viable choices. After his 20 years in the biz, with his own successful series under his belt, the choices become: open your own studio, secure another series (easier said than done), or direct on others' shows. That last option is a far better prospect in L.A., where productions are more numerous.

The effect of Tom leaving NYC will certainly be felt here for a very long time. Tom was one of those unique people who was able to draw work (no pun intended) here to the East coast. Everything you said about the limited viable choices here for someone such as himself is unfortunately very true Dave. Everyone, regardless of how long you have been in the animation industry, struggles with the question of going where the work is. Once you have a family the question and the pressures only get bigger. I wish Tom the best of luck in his latest endeavor. Whether you’re Brad Bird, or Tom Warburton you have to decide what is, or where is, the best place for you as an artist to continue to grow and thrive and the only responsibility you have to yourself and your family.

You nailed it, Justin. True. true.