My Lunch with Howard 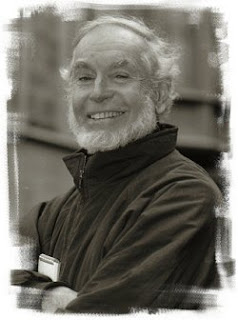 It may not be as famous a title as "My Dinner with Andre," but it has a ring to it. Howard Beckerman and I have been meeting for lunches since he was my thesis advisor at the School of Visual Arts 15 years ago, and boy, are our stomach's full!

Former ASIFA-East president (and current PBS Kids Vice President of Children's Programming) Linda Simensky has repeatedly mentioned her own debt to Howard, saying that his casual and funny way of public speaking informed her style. While I know just how Linda feels, I can go even one step further: I wanted to BE Howard Beckerman.

Not only is he an incredibly nice man and terrific teacher, he has accomplished so many of the things I had hoped to achieve in my career. First off, he is a writer. He wrote articles published in various animation and film magazines, a text book "Animation: The Whole Story," and authored several terrific animated shorts including "Boop-Beep," "The Trip," and "Jack The Giant Killer." He is a teacher, a long-term executive board member of ASIFA-East, and worked for legendary studios such as UPA and Paramount as well as heading his own successful independent animation studio for many years (with his talented wife, Iris).

When I look at Howard's life and work I can see his influence all over my career path. As we all know, a school such as SVA costs a pretty penny, and it naturally leads one to ask if a costly four-year animation program is worth it, especially since there are so many alternative ways to learn this craft. Without SVA, I would not have been introduced to Howard Beckerman. Words cannot describe how encouraging he was in my formative years. I was not the best artist in the room, but instead of giving me up as a lost cause, he kindled my interest in writing and storytelling. His sensibility of gentle cleverness inspired my thesis film and also my first post-school film, "Snow Business." I think by nurturing my writing side, Howard actually challenged me to play catch up with my other skills. After all, how could one realize the ideas in their head without being able to put them down on paper?

When I began my career with Michael Sporn, Howard was freelancing for Tony Ciao's nearby DMA studio, so we frequently met for lunch. Our relationship once based on the student/teacher scenario now became a valued friendship of peers. Together with my job at Sporn's studio, those lunches made me feel like I was now a part of the industry. As a result, I still make a point to meet up with former students for lunch or coffee whenever they ask me. I know how important it is to feel connected, and at no time is it more important than in the first few years of a career.

Last week, Howard and I met for lunch at Molly's Pub near SVA. I showed him four new gags I drew for consideration at the “New Yorker.” I learned that, for a time, he had also submitted gags to the magazine. And, just like me, he eventually had to stop because of other commitments. Our lives and careers are really a series of choices. Despite our ambitions and abilities, we don't have infinite time or energy to branch out in too many directions at once. Some plans don't stay with us for the long haul. Life and a bit of luck steer us toward what is most important.

There are many kinds of hero worship in this industry. I know from personal experience that I clung to Walt Disney and Chuck Jones hardest in those years before I made real life connections. As a world animation community, we'll always have those heroes in common. But, it's not until you start to make your own important relationships that your true heroes emerge.

It’s almost a cliché that your heroes are bound to disappoint you. You may like someone's art but that doesn't mean that you would also connect with that person one-on-one. Howard Beckerman is that rare mixture of talent, class, and kindness. Why not allow a little Howard into your life? Pick up a copy of his warm and informative book, "Animation: The Whole Story."
http://www.amazon.com/Animation-Whole-Revised-Howard-Beckerman/dp/1581153015/ref=sr_1_1?ie=UTF8&s=books&qid=1247072296&sr=1-1

I may have started with Walt and Chuck, but that was only because I hadn't yet met Howard.
Posted by David B. Levy at 5:49 AM

Great post, Dave. I also consider Howard a friend and mentor. I used to run into him frequently on my commute and enjoyed talking animation as we walked downtown once we reached the city. He's such a wealth of knowledge which he's always happy to share. This reminds me I need to catch up with him again. :)

I think that Howard is totally underutilized at SVA. Or maybe the curriculum is such that students aren't prepared to absorb the knowledge he has to drop.

During my 3rd year animation class with him, I began developing my idea for what I wanted to be my thesis film. And that film never even got close to completion.

I'll never forget the time I showed Howard a really early test I had animated of my character. He looked at it, said it was nice, but then grabbed a piece of animation bond and said, "Wouldn't it have been much easier and more clear to do it like this". He did a drawing in about 6 lines that captured everything that I was going for but without all of the drawing fuss I was putting into it. Simple. Clear. Direct.

At the time I sort of disregarded the comment. I was way too caught up in the finesse of the actual drawing. It took me a few years to really appreciate what Howard was trying to tell me.

Every day I think about that drawing that Howard did, and that lesson he was trying to teach me. He was right this whole time, and what he managed to do with ease is what I struggle to do everyday. If I had listened to him I would have been way ahead of the curve, and I may have actually finished my film.

That's a dashing picture of a very lovely fellow.

When I first met Howard, I was instantly reminded of a television program I used to enjoy as a kid.
A quick glance at this pic should reveal who he reminded me of.
http://neighbourhood.bigblog.com.au/data/0/4643/image/NeighbourhoodCast4861720060412223800.jpg

Thanks for sharing your Howard stories, guys. And, Phil, I think anyone worth their salt will look back on their school years and remember moments like that. That's a very healthy thing and evidence of maturity and introspection. I have moments like that from as recent as last year! Ha!