The art of Adrian Urquidez and Jason McDonald

I've been running a sort of virtual home studio for the last few years and the best part of this operation is that it gives me the opportunity to work with a lot of talented friends. For this post, I'd like to throw a spotlight on two terrific and versatile animation artists. When the Boston-based Clambake Animation (run by partners Carl Adams, Andre Lyman, and Carrie Snyder) engaged me to direct season 2 of "Assy McGee," it afforded me the opportunity to once again work with my good friends Adrian Urquidez and Jason McDonald.

We first met as co-workers at Michael Sporn's studio in the mid ’90s. With all of the crew working so closely together, the family atmosphere of the studio was conducive to lasting friendships. Jason is a fine designer and storyboard artist who left his stamp on many a Sporn production. At Sporn's, Adrian was a jack of all trades who also grew into a hell of a production manager.

On "Assy McGee" season 2, Adrian created half of the demanding and challenging background art, while Jason tackled almost all the character designs along with many of the props. The two of them did a smashing job on the quirky series, and I've been privileged to work with them on subsequent projects. Since "Assy" wrapped, Jason storyboarded my most recent short, "Owl and Rabbit Play Checkers," and Adrian just finished assisting me on a project for Sesame Workshop.

I'm delighted to share some of Adrian's and Jason's fine work on "Assy McGee" below, made for the Carnival-themed episode. Enjoy... 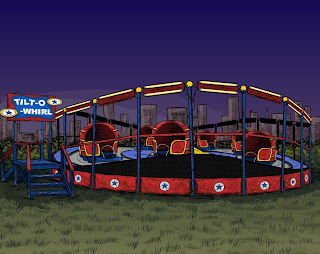 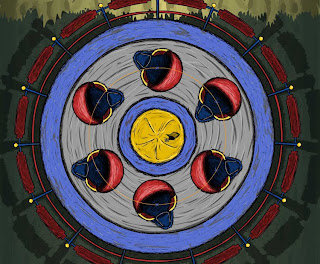 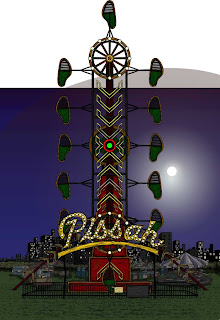 You only spoke about their talent.
Adrian and Jason are two great guys to hang around with as well. Sure, they can bring style and jazz to an animated project and they'll finish it on schedule, but they're also great to have a beer with. They keep things light and fun.

Nice post, Dave. I don't know Jason, but I'll definitely second Michael's comment re: Adrian. When Larry's done with him, he'll also be one of the few people left who know how to operate an Oxberry! Multitalented for sure.

Do you have any thoughts on the advantages/challenges creatively when operating a virtual operation vs. an operation with all/most activity under one roof?

True, true Michael. Great guys to hang around with for sure! Adrian and Jason are the best!

Mike Rauch, I think the main advantage a virtual studio has is that its cheaper because of the lower over head of having no studio rent and additional equipment costs. And, the workers can be anywhere, so you can cherry pick a great crew without geography being a factor.

But, in all other areas a proper studio is superior. Nothing beats everyone in the same room working as a team.

One of the strange things I've discovered about the NY animation scene is that we have every opportunity to meet each other, but it's not that common to have seen each others product.

I've known Dave for nearly a year now and have only seen three of his films, and one of those was only a few days ago.