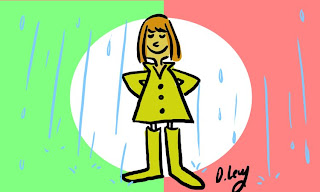 There's a lot of bad information about pitching and development out there and one myth I want to address is that developing and pitching projects is a waste of time. It's easy for development executives to tell you how much they love your project and want to make it happen, but then never contact you again. Even when the rug is pulled out from under you, only YOU decide if the process has been a waste of time.

To develop a pitch is to develop your voice as a writer and an artist. Even being strung along by an insincere development executive (no, they are not all insincere) doesn't change the fact that you created something that you may take with you to greener pastures. Something like this happened to me recently.

My collaborator and musician extraordinaire, Bob Charde, and I have been meetings with various networks and entertainment companies to present ourselves as a creative duo. Typically we have a casual chat with the execs and then screen DVDs of our films, "Good Morning" and "Owl and Rabbit." One such meeting ended with an enthusiastic executive asking us to retool the characters from one of our films into a different format. We left inspired and immediately brainstormed the possibilities over coffee. Within a week we had three options to pitch to the exec. But, as it often goes, the exec had cooled off to the idea by this time.

Were we strung along? Did this exec waste our time? Is this yet more evidence why someone should never even bother trying? It could be, but it wasn't for us. Now we had three new series options to pitch with our film's characters. And that sure came in handy a few weeks later when a major network e-mailed asking us to pitch an interstitial tailored to a specific theme. Coincidentally, one of our concepts dovetailed nicely into this network's proposal. With that we are throwing the pitch dice again. I share this story because I think it's evidence that pitching is only a waste of time when you choose to pin all your hopes on one idea or on one particular opportunity or executive.

I have come to believe that development executives will always let you down; not that they intend to but there's just no way they could ever be as excited about your project as you are. And in turn, most creators they strike deals with probably disappoint the executives since it's got to be tough to live up to what an exec might imagine your project to be before it's made. In the end, it's up to you to make sure that pitching isn't a waste of time. All your efforts travel with you and build up your creative currency over time.
Posted by David B. Levy at 6:20 PM

I recently came accross your blog and have been reading along. I thought I would leave my first comment. I dont know what to say except that I have enjoyed reading. Nice blog. I will keep visiting this blog very often.