Those Quiet Moments Floor Me 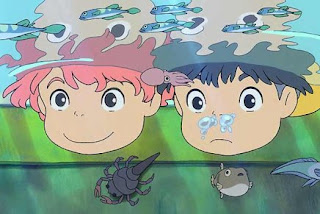 I just got back from seeing "Ponyo" and while I usually don't always comment on world releases in this blog, I feel moved to break that habit for this post.

Note: there are spoilers below if you haven't seen the film.

There's so much to be said about this terrific film, but for me it's the little quiet moments throughout "Ponyo" that make it truly special. Here's a round up of bits from the film that I still can't get out of my head:


-The Flood:
With most of the seaside town underwater, Ponyo and Sōsuke journey to find Sōsuke's mother in a little toy boat. There are lots of quiet moments of the two looking underwater and observing the new sea floor at their doorstep. Instead of it being terrifying to be in that water, Sōsuke's walk in the shallows (surrounded by a whole host of prehistoric fish swimming around him) was a thing of beauty. I particularly loved the subtle bit animation of a baby octopus slowly climbing its way into Sōsuke's home, perhaps showing nature asserting itself into our modern lives.


-The Bugs at the Shore:
Sōsuke climbs down to the ocean with a pail containing Ponyo (as a fish) and just foreground of him are these majestic seaside rocks. As Sōsuke gets closer we see a herd of rock dwelling bugs scatter about, reminding us that in this film there are world's within worlds and these worlds constantly interact with our own.

-Ponyo and the Baby:
Ponyo and Sōsuke come across a young family with a new born baby and there's a wonderful sequence where Ponyo and the baby stare into each other's eyes. In many ways Ponyo is a baby herself, just learning what it's like to live as little human girl, so the gaze between these two characters is particularly poignant. Miyazaki gives us long close ups of the pair as Ponyo slowly registers wonder at the baby while the baby holds its ground cautiously. Before this sequence is over Ponyo pours a cup of soup for the baby and gives the parents a stack of sandwiches. I saw the movie with Jason McDonald and afterwards he remarked, "What a sequence! A very human moment of people helping each other." I think we both got goosebumps discussing this. We so seldom see people connecting with each other in a real and meaningful way in an animated children's feature film.

-Ponyo spilling water out of the boat:
Once the Ponyo and Sōsuke make it ashore, there's a scene where Ponyo grabs the little toy boat out of the water and tips it so the water can spill out. Its such an ordinary moment, but full of natural innocence. This is the opposite of a cliched animated performance. It's moments like this that help a character become real to the audience's eyes.

***for a far more comprehensive look at Ponyo, I highly recommend Michael Sporn's Splog (http://www.michaelspornanimation.com/splog/) post of August 18.
Posted by David B. Levy at 12:00 AM

It's been two weeks since I've seen the film and I'm looking forward to seeing it again next Teusday. Every detail you mentioned is still in my mind, and so many more keep replaying. This film has had a strong effect on me. I seriously think it's the best film of the year.

Michael - it is your enthusiasm for this film that makes me want to go see it...

See it as much for your love of aniamtion. That's what makes me enthusiastic. 2D animation couldn't be more alive, as witnessed in this film.

A lot of negative reviews of this film focus on the seemingly "nonsensical" aspects of the story without considering how authentically it represents a child's point of view with its own internal logic.
It's rare to see a film for kids be this honest and not mired in condescending story explanations.
Also it's beautiful, so that's a plus

I think there's a group of us who just follows the Ponyo discussions around. Have we become Ponyo fish-heads?

I loved your essay on Ponyo's quiet moments, very insightful. No doubt I'll fee inspired to write more of my own essays. All of Miyazaki's movies are so richly textured and layered; you need three viewings to soak it all in, because you're getting three movies at once.

Miyazaki talks at length in one of his essays from Starting Point (not to keep harping on that book, but Miyazaki's memoirs are a must-read), where he describes his observations of children, their way of focusing on the smaller details tha adults overlook. Next time you see Ponyo at the theater, bring your book along with you and start skimming.

I am so glad to hear how much people are enjoying Ponyo, and I personally cannot WAIT to go and see this film!

I skipped the spoilers, but I must say Dave... I was tempted! :)

I thought the movie was adorable. It's one of those few movies that I'd be happy to shell out the 10 bucks for.

What I really like about Miyazaki's films is that the characters don't feel like actors playing a role, they're real people. The two sisters in Totoro & Ponyo & Sōsuke in this film feel like real kids. They're more believable than any Disney character I've seen. They don't ham it up, they're natural.

& don't even get me started on the artwork, especially the backgrounds. Colored pencil for God's sake!...

I resisted reading this post until after I saw the movie! I agree there were so many nice little moments in the film, and it was truly a treat for the eyes.

Very cool to read so many interesting experiences of this film! I gave my own mini-review on my blog for Pavaline Studios. Story quibbles aside, the animation is amazing and I enjoyed watching this film very much.

hi David, I just bought your book: YOUR CAREER IN ANIMATION: HOW TO SURVIVE AND THRIVE, and i´m becoming a huge fan of you, im from Costa Rica by the way so you would be glad to know someone from other language is reading your book!