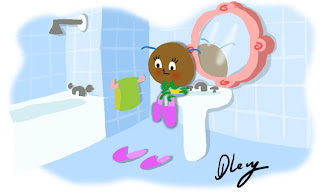 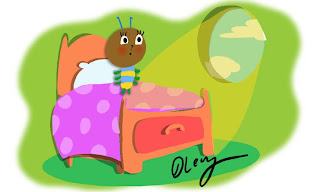 What is the state of the animation industry in the Big Apple area? If we take the recent departure of Tom Warburton to L.A., Patrick Smith's acceptance of a long-term teaching post overseas, the soon-to-be heading west PES, and the smallest amount of series work in production since 1992, then this can leave one to conclude our recovery is still some time in the future. While it's easy to feel the loss of the three big talents named above, it's important to remember the large talent pool that remains. And, the good news is that one of our best and brightest has recently returned after spending a couple of years living in Europe. He comes back with a new film in the can and two more in production. Ladies and gentleman I am speaking of none other than NY animation legend, the Academy Award Nominated John R. Dilworth.

Many may know him as the creator of the terrific long running Cartoon Network series "Courage the Cowardly Dog," but more people should be aware of his wonderful independent films. My connection to John stretches (pun intended) back 17 years. We first met when he was the substitute teacher at my SVA Intro to Animation class, which was normally taught by John's sometime collaborator Mark Heller. It was 1992 and as a new student I had no idea who John R. Dilworth was. Looking very much like John Turturo, Dilworth zipped into class riding on a swivel chair and paddling the air with imaginary paddles. Needless to say, he got our attention. He ran his most recent cartoon, telling us that we were among the first to see it. It was called "Psyched for Snuppa," and featured characters written by Michael Pearlstein that would later be transformed into the series "Sniz and Fondue." That series would be animated at the Ink Tank and was featured on Nick's anthology show "Kablam!." But, the characters were never more alive and funny than when they were in John's hands. I thought the short was one of the most exciting pieces of animation I'd ever seen.

John was deep in his hero-worship of John Kricfalusi period. I guess "Johns" have to stick together. "Ren and Stimpy" was still a hot new show, and our class was just as excited about it. He showed us clips from the series and made us students analyze every creative element in the animation, right down to the soundtrack. It was the first time I had ever thought about every single ingredient that makes up a successful piece of animation and I have to admit that I was probably more intimidated by the exercise than I was inspired. After the two classes we didn't want Dilworth to leave and I made a silent pledge that I would show him the first animated film I completed at SVA to get his feedback. But, when that film proved a great disappointment to me, I chickened out.

My next encounter with John was two years later during my Junior year at SVA. Mark Heller had hired me to work for his then-partner in a stock footage company. The company regularly supplied stock footage to SNL, David Letterman, etc. Unfortunately, the boss turned out to be so erratic and irrational that he actually added a $50 bonus to my first check just for putting up with him! Yet, after one more week, I'd had enough abuse and I decided to give my notice to his partner, Mark Heller. When I arrived at Mark's place, John Dilworth was there to let me in. The two shared space in those days. Mark soon joined us and I ended up giving them both a blow-by-blow version of the horrible two weeks that led me to give my notice. John didn't say one word during my long story, but he listened to every word. When I was finally finished, John spun around in his chair and said, "Well after a story like that there's only one thing to say... (then he pointed towards the door and shouted) GET THE FUCK OUT!" Of course, he was kidding, and we all shared a good laugh. I left determined that I would show him my thesis film the next year to get his input at an early stage. But, again... I chickened out.

When I made my first independent films I was pretty headstrong about doing things my way, so thoughts of showing my works-in-progress to someone like John Dilworth was out of the question. He might change my idea, I worried (foolishly). Last week, John and I met for lunch at Molly's Pub (a favorite haunt of Howard Beckerman, for all you animation groupies out there), and after a long enjoyable lunch he asked me if I was working on any new films. I hadn't planned to talk about it, but on his prompt I told him the story of my next film, "Keisha Katterpillar." His eyes lit up and he immediately knew just how to improve it. His main suggestion was on the moment where Keisha clears her bed of stuffed animals––something she did thinking it might make herself grow up in a hurry. I was going to have her simply shove the dolls off her bed. John gently protested: "Would she really do that? Have you seen little kids and their dolls? Wouldn't she put them away very carefully and with great respect?" As soon as he said this I knew he was right. But, John wasn't finished, he also gave me a great idea to improve the ending, again coming from getting inside the character's head to find the most appropriate outcome.

I was blown away by John's ability to think this way. Sure, I knew he was brilliant. How could the filmmaker behind "The Dirdy Birdy," and "The Mousochist," not be brilliant? But, I hadn't been sitting across from him when he hatched those ideas. Watching John go through his thought process gave me even more respect for his gift. Upon returning home I made John's suggested revisions and sent him a copy of the animatic along with my design set-ups (shown above). This time I'm not going to chicken out. I'm going to show John every stage of this film and ask for his feedback. It took me 17 years to work up the courage (pun intended again!) to enlist John's advice, but as they say, "better late than never." And, if I may dare speak for the NY Animation community, "Welcome home, John!"

*ASIFA-East is planning an evening of John R. Dilworth shorts. Stay tuned for more details!
Posted by David B. Levy at 10:22 AM

Thanks for the piece; it was a nice way to start my week.

Having John Dilworth's feedback, you should consider yourself lucky. He's one of my idols. I've only met him a few times, but one of those times gave me some deep impressions. They made me realize that this guy functions more as a filmmaker than just an animator. I can't wait to see Dilworth's next project. There's always something refreshing about them.

I look forward to the ASFIA evening in December.

That was an excellent point about the stuffed animals.

All too often we see characters in animation behave in emotionally false ways -the little girl in Coraline leaving her "favorite hat" on the roof of the car, the mother holding her baby facing the angry dogs in the opening of "Waltz with Bashir", the quick grab of the dropped suitcase in Kovaleyev's "Milch".

These falsehoods stick with me more than any positives in films. Its as though the filmmaker has shown us they don't really have a feeling for the human character, after that you just can't get it back.

Hi David, I been working on a pitch and I was clueless were to begin; now thanks too your latest book l know better, Congrats and thanks again.

Michael,
So true about John! I can't wait to see his newest short. And, glad you liked the piece.

Emmett,
I agree that John is more than just an animator (not that being a great animator is anything to sneeze at), but he's such a fine writer, designer, director, storyteller, etc...

ROC,
You touched right on the issue. I think falsehoods sort of add up and create doubt in viewer's mind as they watch something. Even if one only feels it subconsciously. John's approach is get into the character's skin and let it inform his choices. It's very interesting and something I hadn't quite ever thought about enough. But, I will now!

Mr. Bob,
So glad the book was helpful to you! Best success to you on your projects...