Just on the Horizon 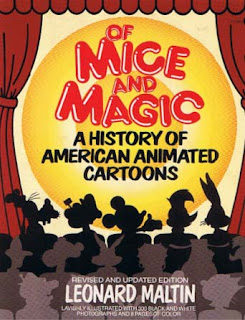 Leonard Maltin's "Of Mice and Magic" remains one of my favorite books ever written about animation. Where else can you read entire histories of the animated output of Famous Studios, Terrytoons, Columbia/Screen Gems, UPA, and so on. When Howard Beckerman assigned our History of Animation class this book, I had no idea that I'd end up reading it 25 times (no exaggeration) or that it would provide decades of inspiration as the most useful research tool in my library.

"Of Mice and Magic" leaves off in 1986 when the most recent news item was the success of "An American Tale." As hindsight shows us, just on the horizon was "Who Framed Roger Rabbit?," the '90s Disney renaissance, "The Simpsons," Nicktoons, Cartoon Network, the modern preschool explosion starting with "Blue's Clues," and the edgy groundbreaker "South Park" followed by the ongoing success of the Adult Swim line up.

In 1986's "Of Mice and Magic" Pixar is not even a gleam in John Lasseter's eye, nor is Lasseter even mentioned. Disney is the only company that can make a financially (or even creatively) successful feature with the possible exception "The Yellow Submarine." Dreamworks doesn't exist. There is no Bill Plympton, Don Hertzfeldt, Spike and Mike Festival, or MTV Animation…yet.

In the frozen-in-time end of Maltin's book, there are virtually no signs of hope that this second "golden age" was imminent. And, even when it began to arrive, as late as 1992, I still had instructors at SVA tell me there was no work available in animation. The 1986 "Of Mice and Magic" allows us to compare everything past, present, and future to what is considered The Golden Age of Animation, and while that standard of measurement will not go away any time soon, it is no longer the only comparison point. Now we have the 1990s animation boom to examine, which trickled into this decade despite the dot-com bubble burst, the terror attacks on 9/11, and the economic collapse.

We don't know what will create the next golden age, but our industry is stronger than it was in 1986. For one thing, Disney is no longer the only company that can make a successful feature. (In fact, it has something to prove with its upcoming "Princess and the Frog.") In 2009, the animated feature is now an institution, something as durable as the action film or the romantic comedy and usually out-earning both at the box office. On TV, even if you're not a fan of Seth MacFarlane's block of animated prime-time shows, they keep the public seeing animation "for adults" on a nightly basis. Programming is no longer limited to movies theaters and TV, and the internet is no longer just a place for free exposure. Atomfilms.com pays animators to make films it can distribute or broadcast on its website. I'm wrapping up a series of paid shorts made for an iTunes podcast. And, let's not forget the indie animated feature revolution; not only have individual artists such as Bill Plympton and Nina Paley made features, but low-cost animated features are also being made and distributed worldwide to theatrical release. Compare these factors to what looked possible in 1986 and you might conclude that we're sitting pretty for the advent of the third golden age.

But then again, "sitting pretty" is never the way to make something happen. Just because we chose to work in this industry doesn't entitle us to a smooth ride. Our livelihoods and career satisfaction are ours to make. We do this by being aware of the possibilities and taking our future into our own hands. The health of our industry does not live in the headlines of "Variety," it starts at your desk.
Posted by David B. Levy at 7:54 AM

It's an exciting time to be in animation for sure!

"Golden Age of Animation".
How many of these are we going to have?
Are our grandkids going to be saying "Remember the 6th golden age of animation? Wasn't the 12th age a great age?".
Does it ever graduate from gold to silver to copper?
What are we in now?
With all the Flash puppetry maybe it's The Wooden Age of Animation.
I propose we do away with Golden Ages and attempt to do better work (which is what you're really saying, I think).

But, I supposed people are always going to look back at pockets of time and classify them as something. Contrary to what my post might suggest, I spend more time looking forward than looking back. But, from time to time I like to look back and remind people of where we are at and what is possible.

Dave - I was actually just about to update my post because I'd left off the one sentence I'd intended to include when I started typing the comment.

I figured you'd used that particular expression (Golden Age) because it's an animation standard and a convenient way to categorize things, not through some longing to go back in time so you can Walt Disney a hug (although he'd be a lucky fella to get one from you).

Agree with your comments, Dave. Maltin's book is a great resource, having used it in my History of Animation class and will be again this Spring. It will be interesting to see how the nineties, this current decade, and what is yet to be will eventually be classified in animation history. Yes, these are very exciting times!

Nice post, Dave. There's certainly a sense of optimism that most of us need right now.

I sort of agree with what Elliot is saying about citing another "Golden Age" of animation. Personally, I've always just called it the next "new wave" of whatever it is (Disney, Cartoon Network, etc.). In my opinion, the Golden age ends somewhere in the 1950's.

The recent announcement of the five animated features qualifying for the Best Animated Feature Academy Award was kind of reassuring. I'm more concerned with the fact that so many animated features were made and released this year. They are not all amazing, but it is a sign that animation may no longer be seen as a children's medium, but capable of much more.

As far as jobs are concerned. Well, I get the sense that if you are at the top or bottom, animation jobs are still pretty uneven. But at least you can say that instead of there not being any jobs in animation.

Emmett - you talk of needing a sense of optimism.
You are certainly not alone in feeling this way.

The animation community is, as we all know, reasonably small and often very tight knit.

Even more so when we're all working on a project together - very much like actors in a play.

When you're part of the cast it's GREAT! WOO HOOO!
But when you auditioned and didn't get in, it's not much fun.
Standing on the outside looking in is hardly inspiring or boosting to the ego or the spirit.

Dave, you should write the continuation of this. Start where he left off

Allan Nuewirth sort of wrote the continuation of this Maltin's book with his "Makin' Toons." But, he wrote it around an interview format that made a critical analysis pretty impossible. In short, all the people of the so-called "second golden age" are still alive so it is harder to be critical and truly objective about their output. Enough time had gone by with Maltin's book to allow his book to draw some conclusions.

So––maybe another twenty years or more have to go by before a proper history of the 90s animation boom is told.

Allan's name in my last post should have read:
Allan Neuwirth. Sorry for my bad spelling.

I too, love this book. It's the first one I recommend people when they show interest in our industry. And Allan's book is a nice follow up - adding quips and just the right amount of classy gossip.

I love Elliot's comparison about us animation folk being actors in a play (having to audition, etc.). It is a very apt comparison because like the actor, the animator has selected a career in the arts. The arts are unstable and that's that. If we wanted stability we should have become cops or worked at the post office.

What else do you love about me?

Last long, I tell my friends.

I feel embarrassed to admit that this book was not part of our required reading at SVA when I attended in 2000-03. It looks exceptional and I will look to get myself a copy to read on vacation this winter.

One comment I found interesting in your piece was the part about the there being no work. I feel that is almost the common professorial mantra. I heard it a lot in 2003, I guess you did too, and I hear its the way it is now. Maybe there always is work and us animators just always wish there was more. Personally I want to see NYC blow up (with animation), but will it ever be enough, or will we still lament that work is sparse?

I was recently asked by an animator in LA if it was worth it to move to NY for work, he was having a hard time in LA with Nicktoons not hiring that much and Cartoon Network drying up. I said there is stuff, but I think LA will be equally hard, also the productions that he wants wont be in NYC as the guy really is an animator and there aren't many things going on TV series wise with drawn characters. I could be wrong.