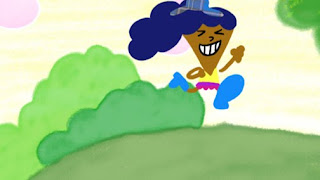 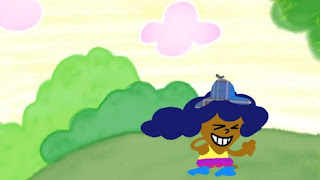 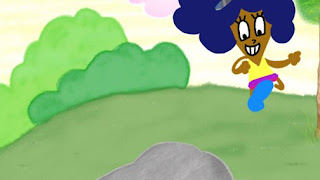 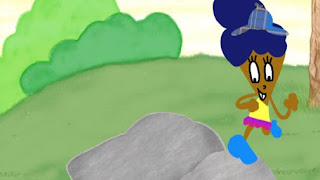 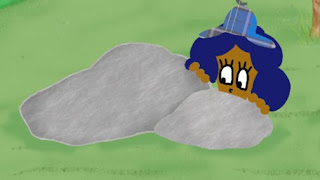 Michael Sporn wrote a great post last week about limited animation and it got me thinking about my feelings on the subject. The limited animation I love (Dr. Katz, The Adventures of Rocky and Bullwinkle, South Park) tends to rely on incredibly strong writing and/or soundtracks. When the right balance is struck, its hard to imagine these shows any other way. I certainly wouldn't want Dr. Katz to move like it was directed by Richard Williams. I don't need Dr. Katz to move at all.

My personal beef with limited animation began long before Flash came along. As an animation student, it was really disheartening to see so many of my classmates splitting their characters up into separate levels so they could do the least amount of work. Seldom did they split layers so to emphasize only one specific movement, which would be a justified use of the technique. They split up a character because it was a time-save, and it supplied the feeling that they were using professional studio techniques. After all, this was how commercial studio jobs were done, so why not work that way?

In the days of cel animation you could split up a character only so many times. After four or five cel levels a character would grey down the artwork so much that the scene could turn to mud. Now, when many think of 2D, they automatically think of Flash. In this program (or in any digital 2D animation program) we have unlimited layers. We can split up a character into a project or symbol that contains hundreds of individual bits of art. And this is the system that has taken over as the main way 2D animation is produced for TV and the web. And it's hard to argue with the economic benefits. Such a production system is ideal for both in-house and virtual studio production lines.

So what is my beef with limited animation? Or in particular, with most Flash animation? I find it incredibly dull to watch. There are no surprises. There's only a rigid character puppet made up of pieces that hinge at set anchor points. In short, when you animate with a puppet such as this, you are not only NOT DRAWING, you are specifically NOT DRAWING MOVEMENT. In worst of Flash animation, the animator makes poses and then adds mathematical tweens calculated by the computer. The result is as dull as it sounds.

The series of shorts that I'm making for Sesame Workshop requires me to work very quickly. I am completing each 30 second animated spot in one week's time. This breaks down into one day to build a storyboard animatic (including writing the spot!), one day to design the characters/background layouts, two days to animate, and one day to color/composite. With such a time crunch you could think that my only option would be to animate with Flash puppets, but I refuse to do so.

Instead, I draw everything directly on my cintiq. This saves a need for scanning and processing the scans. I draw in photoshop where I can select a nice pen tool that recreates the feeling of traditional drawing. And because I AM DRAWING, I can DRAW MOVEMENT. This means that I have a real shot at these spots looking visually exciting. When you draw, the process itself is spontaneous. Something magic can happen when you put pen to paper (or cintiq, in my case). I'm often surprised at the choices I make as I go. That keeps the process fun for me and on a fast paced schedule like this, having fun is very important.

Above are a set of stills from my latest Sesame Workshop film (background art by Adrian Urquidez). I cringe to think what the action would look like had I decided to use a Flash puppet. I really dig distortion in a character. I don't mind if a character goes off model as they move, since movement should be about a feeling (not a matter of mathematics). I wonder if the worst byproduct of all this Flash animation these days is that, through an emphasis on economy and ease, it encourages NOT THINKING. Maybe that's why my brain turns off when I watch it.
Posted by David B. Levy at 2:15 PM

While I agree that bad flash animation can be interminably boring. There are many gems out there that off the surprises that you speak of for instance Arthur de Pins, all of his art is tweened. Also I have seen some amazing stuff out of the small power house studio which I occasionally work with, Globz. Fully drawn animation has its definite ups, thats why I chose to do the same with my film, in retrospect I do wish I played with some of the other animation techniques that I have been working on at work, I guess these could be called cheats, but it could also be looked at as style.

These are for "Word on the Street", right? That's one of my favorite podcasts of all! Jack Black's episodes are particularly great.

Have any of your animations gone up yet? Can you tell us some of your words so we can look out for the animation? Look forward to seeing it.

I couldn't agree with you more. Oftentimes, It's not only more visually pleasing - but also faster to draw everything (in a smart way).

It's also very nice for things to break the "model pack" - and not be the same 3 arms, mouths, feet, bodies, heads etc. etc. Even on a time constrained production these little custom touches can be added in. At the end of the day, adding those little things into a shot give it your personal touch, make the performance seem more spontaneous and keep even the most mundane of animation tasks exciting.

Totally agreed. This is how I always feel when I see limited looking Flash animation.
Whenever people ask me how I feel about Flash animation, I have to double my answer, because there is two types of Flash animation: limited and full. Basically TOTAL DRAMA ACTION stuff vs. John K. or Augenblick material. And of course, my preference goes towards full animation. The kind where the appearance of the character changes ever so slightly throughout.

It seems that soon I will be befriending flash more in my career, sometime soon.

As long as it's good, the medium is never an issue-- in my own beginning experiences.
Good words once more & thank you.

"Interminably boring" is a good word for this issue. Again, at its worst, flash puppets are like rigid model sheets that never ever change. They may rotate and pose, but they never quite come to life. Sure there is good and bad flash puppets, but I object that one has to rely on a flash puppet just because a time or a budget is tight. What ever happened to drawing? Us animators are supposed to draw fast. At least that's what we used to be known for.

Mike,
Yep, these sesame animations are for "Word on the Street." Not sure when they will go up, but when I know, I'll let you know.

It seems to me that a great artist creating each frame by hand will almost always outdo (in efficiency and quality) a lesser artist using the computer to make more of the decisions.


Automated artistic decisions seem to kill by half the energy, clarity, and impact of an individual artist's educated and purposeful choices.

It's interesting how all of the advancements the digital pipeline brings to animation are simply being abused.

There is so much cheating going on today you could forget what solid frame by frame even looks like.

Surely it's better (and more efficient and possibly cheaper) to make less drawings look better than to fiddle about in wretched Flash for hours at a time...

I absolutely agree with you. You put into words why a lot of Flash animation is terrible. Most people use the motion tweens and shape tweens and hardly anyone uses the onion skin (where you can do inbetweens the traditional way.

My term for it is the difference between animation and moving furniture.