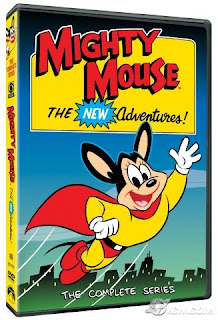 You never forget the first time.... you feel old. I had a flash of my actual age while attending this past Ottawa International Animation festival. Looking around the room, I wasn't the oldest, but I wasn't the youngest either. There's a name for that: middle age.

Even more evidence of my age arrived last week in the form of a dvd release: Mighty Mouse, The New Adventures. This groundbreaking saturday morning cartoon series first arrived in 1987 when I was a 14 year-old kid, too old for Saturday morning cartoons despite the fact that I still ate sugary cereals. If you could see my bedroom wallpaper, not that anyone was lining up to, you would have seen a gaggle of animation articles torn out of the newspaper and stuck all over the place. There were clippings about Roger Rabbit, An American Tale, and Oliver & Company. I figured if I surrounded myself with animation it might rub off on me, not knowing that silly putty would have picked it up just well.

I was very aware of Ralph Bakshi. Growing up, my dad and Bakshi shared the same Brooklyn street and possibly a can of soda. The pair later attended The High School of Industrial Art (now the High School of Art and Design) where they might have shared another can of soda. Bakshi went to work at Terrytoons, and my dad earned a scholarship to attend Cooper Union––heading for a career in advertising. Despite the fact that Bakshi still owed him a soda, my dad retained a life long interest in the man, making a point to see all his films.

And then one day there was the article in the paper announcing Bakshi's new TV series, a fresh take on Mighty Mouse. I watched every episode, taping some of them using an early form of TiVo called a VCR. The show featured jump cuts, random gags, paint splatter BGs, characters changing model, obscure references, inside jokes, and lots of breaking the fourth wall. It was a brilliant mess. The words "game changer" are thrown around far too often these days, but that's the only way to describe this cartoon series.

But you don't have to take my word for it. Click here to read a review from The Onion.

Because of Mighty Mouse, The New Adventures coming out on DVD, someone who wasn't born when the show debuted can now better understand what came after this series. For instance, The Ren and Stimpy Show didn't drop out of the sky. Many of its ideas were first tried on Mighty Mouse and by John K, himself. While Mighty Mouse didn't invent the many elements that made up its humor, the innovation was in their combined effect.

More important still, is that this release helps celebrate a different side of Bakshi's legacy. The controversial filmmaker is usually associated with his groundbreaking feature films such as Fritz the Cat and Heavy Traffic. As a result, we don't automatically credit him with sparking the creator-driven TV animation era. But, as John K says in a bonus documentary included on the DVD, "None of this would have happened without Ralph."
Posted by David B. Levy at 8:13 PM

Middle aged????
You must be joking.

No matter how you feel about Ralph's films - there are some that don't go for his rotoscoped phase - there's no denying the impact he has had on the industry ! He was the first to push animation into the mainstream adult realm !

I started to feel old when this show debuted on tv. I first sat around the tv with the original Mighty Mouse Show. Phil Shieb's music is still ingrained in my brain. The new Mighty Mouse seemed to be honoring and imitating Jim Tyer's outrageous animation more than anything else. Amazing they could pull this off with an overseas studio - Cuckoo's Nest.

Sounds like my childhood favorite Ninja Turtles. I guess I kind of felt older with their 25th anniversary at NYCC this past year.

Elliot,
Maybe I jumped the gun a touch?

Michael,
That Phil Shieb music really is inseparable with the original Mighty Mouse films. The constant scoring in old Terrytoons films almost hypnotizes me. It has an odd way of making those films feel very evenly paced.

I think the strain of the new Mighty Mouse films pulling off that Jim Tyer feel was that a lot deadlines were missed. There is much talk of missed deadlines in the making of doc included on the DVD set. Apparently, Bakshi had to lecture the crew many times about it.

One thing that is interesting when you watch these 1987 Mighty Mouse cartoons is that, even when they are at their best, there is something not quite perfect about them. Some of the timing might be funny. Even a pan across the city looks sort of clunky. Since then, show's like SpongeBob have taken similar material and made it much slicker. But, I still have an affection for these 1987 Mighty Mouse. Somehow the missteps make me like these cartoons even more. It's exciting to see a crew trying out ideas for the first time.