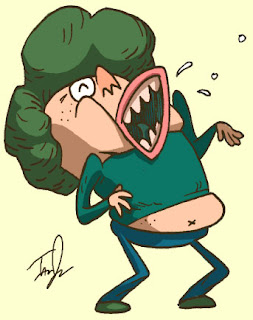 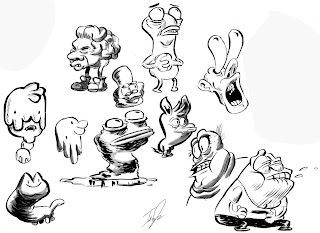 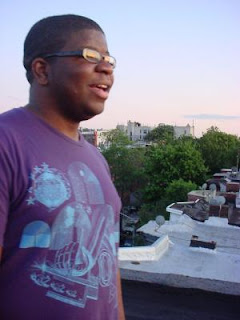 Post-it sketch and warm up doodles by animation director Ian Jones-Quartey (pictured above).

"Don't focus on getting a job. Focus on your passion for animation." These words of advice were spoken by Venture Bros. animation director and SVA alum, Ian Jones-Quartey, to the students in my career class at SVA this past Monday night.

Ian is an impressive character, and not only because his first industry job was as an animation director. He interned at World Leaders during his junior year and it was then that his inking talents were noticed, leading to the studio offering him freelance work into his senior year. But, once it became clear how much of a commitment his thesis film would require, he had to decide which was more important, finishing school or dropping out to work. Wanting to finish what he started, he informed World Leaders that he'd have to stop working for them to focus on his thesis.

Once he finished his thesis he returned to World Leaders to screen the film for his former employers, also handing out promotional postcards. A few days later, they called him with a job offer to direct a flash animated series. Yes, Ian had made a terrific film, which certainly helped World Leaders decide to offer him a job...but, another key element to his opportunity was the fact that he visited the studio, wanting to show them his film. It showed that he valued their opinions and the relationships he'd made during his time interning and working there.

"I had no plans to do the test," Ian recalls, saying, "I just thought it might be cool to check out and be a fun thing to have." But, Ian did more than check it out. He tried to time out the first scene that night. The next day he showed it to the supervisor who helped him correct the work and gave him other pointers. Ian repeated this process each day for the next week and a half until he had the test finished. But, he still had no expectations that he would get the job. He was just curious and wanted to learn. And, this passion was not lost on the production, which wisely offered him the sheet directing job on the series.

In contrast, Ian told our class about a former intern he knew that was very bitter after not being offered a job at the studio following the internship. In that intern's eyes, he was owed a job and fully expected to be offered one at a moment of his choosing. For Ian, this was an affirmation of his approach to not focus on any single job opportunity, but on his passion for animation instead. And, passion mixed with talent and good people skills has way of landing job opportunities. Ian Jones-Quartey is one of those people that seemed to instinctually know this from the start. I'm very grateful he returned to my class to impart a bit of that wisdom and experience to the students.

And, if the above is not impressive enough, for much of the last three years, in his spare time, Ian has been producing his own animated Web series, with co-creator Jim Gisriel, called knockFORCE. As they say, If you want something done, ask a busy person.
Posted by David B. Levy at 7:37 PM

Great guy.
I worked with him on a horrible job sometime last year and he made the experience almost bearable.

Ian's awesome. He's a perfect person to come speak to your class. I hope the students listened.

Hi David, we met back in 2004 at the Puchon Animation Festival in Seoul. I was the dude from the German Filmschool. Would like to send you some pictures, lost your e-mail address, contact me via markuskoerle@hotmail.com.
Best wishes from the Black Forest (totally snow covered right now)
Markus

I gotta say, I am a big fan of Ian and his work. I had the opportunity to work with him on that same job Elliot mentioned, and it did make the experience more enjoyable. N.Y. animation is lucky to have someone like Ian to inspire and teach them.