All in a New York Week 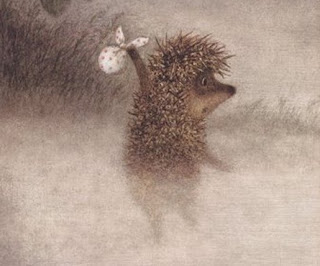 I'm not the first person to observe that sometimes it feels as if there's an animation-related event going on every night in NYC. Last week was no exception, starting out in high style with a presentation at SVA by a living legend, Russian animator Yuri Norstein. For great coverage of that event, see these informative posts by Michael Sporn, Richard O'Connor, and Dayna Gonzalez. "Hedgehog in the Fog," so richly captures the filmmaker's philosophy of exploring the psychology that makes characters move, behave, and react the way they do. And, if that weren't enough, Norstein is equally interested in his characters' relationship to the spaces their in––he calls the space (including camera moves and lighting) another "character" in the film.

So, how does all this play out in the film? In an early key moment, when the fog first envelops the title character, the hedgehog instinctually holds up his precious jar of jam out of the fog's reach (pictured above) as if the fog were a living thing that might swallow up his bundle. It's as true and honest a moment as has ever been committed to film. All at once it establishes the fog as something unknown to the hedgehog. And, the innocence of lifting the jam aloft reveals the animal's young age, while at the same time giving us a glimpse of character by showing how he'll cope with something new and unfamiliar. Some get their kicks from seeing blue people frolic around an alien landscape in Avatar, but Norstein's animation of the hedgehog and his jam jar is the stuff that gives me goosebumps.

And, what can I say about Norstein's work-in-progress clips from his forthcoming "The Overcoat," except that it's truly rare to see the work of an animator who is not only working at his own personal peak, but a peak that is also a pinnacle for the entire art-form. There's very few examples of this in the history of animation. If animation had its own Mt. Rushmore, I'd nominate Norstein's head to be carved right next to Walt Disney. 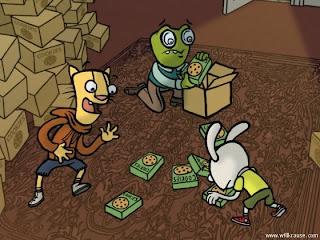 The topic swung from art to the TV cartoon later in the week when I presented a pitching and development panel to a capacity crowd at MoCCA on Thursday night. For the more intimate setting of a museum I went with a two person panel made up of Nickelodeon animation president Brown Johnson and creator Fran Krause.

We hit all the important points on the subject and there were a lot of memorable moments. Fran (who has been on ALL THREE book panels I've had thus far!) explained his reluctance to create a hook or a gimmick for his pitches until someone at the network explained to him that at some point "a five year old kid needs to be able to explain his cartoon to another five year old." This idea was reinforced earlier at our December John Dilworth event where a letter from Linda Simensky was read that included a bit where her young daughter was able to succinctly explain "Courage the Cowardly Dog."

Fran already described the experience of making his second pilot (with co-creator Will Krause) for Cartoon Network (image from their pilot, "Upstate Four," pictured above) in great depth at this post on cartoonbrew, but this night he revealed another piece of the puzzle. During the seven years it took for that pitch to go to pilot production, Fran confessed he didn't really know his characters yet, nor was he sure they would work. It wasn't until he was making that pilot and cast the actors that it came together. Imagine being the executive having to decide which projects to green light, when even creators aren't certain what they have! All the more reason why a creator has to build up his creative acumen because a pitcher is judged (in large part) by his ability to execute, and nothing proves this more than the pitcher's previously completed creative works. 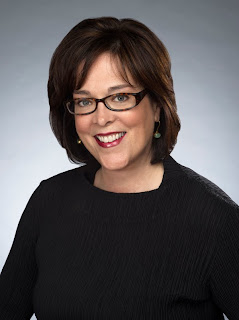 I was thrilled to have Brown Johnson (pictured above) on my panel. She's probably the most influential animation exec in TV today, as Nickelodeon is the nation's largest supplier of original TV animation. Since her promotion to president, she now overseas all of Nick animation development from preschool to older kids cartoons, while also heading up Nick's global animation development slate. Brown told us about Nick's unique development model for its preschool development, which consists of a long and short form assignment. Each year or so they choose a new agenda, for instance, recently seeking out a math-based show. Once they have their direction they reach out to a select bunch of writers and artist whom they've always wanted to work with or work with again. The creators break into teams and each pitch back a show based on the set agenda/curriculum. The most recent example of this being the new series Team Umizoomi, currently still in production at NY's Curious Pictures.

Nick Jr.'s short-form initiative is similarly set up, only the goal is to make a self-contained interstitial, one that might one day make the leap into a series in the way that Wonder Pets and Ni Hao Lai Kan have done. For Nicktoons development, Brown unveiled that (in addition to normal "paper development" where a network options a project and asks for more designs/scripts, etc,) they sometimes do something called "Open Mic," that gives creators some money to make a simple 1-2 minute short starring one to two characters just being characters. She said it is really an attempt to find characters using the simplicity of a stand-up comedy style motif. Just a character being entertaining in and of themselves. Sounds like fun to me! Brown said, "We just give the creator the money and they go away and make the film." It's nice to see that some of Nick's development may go through such a direct process. 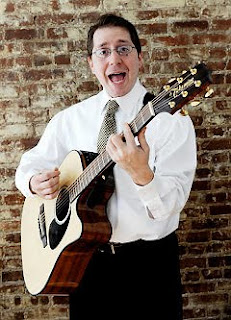 From pure art, to art mixed with commerce, the next evening had us going all the way to the business side with a presentation by the musical accountant, Steven Zelin (you guessed it, pictured above). Dayna Gonzalez introduced and arranged this event for ASIFA-East, and just in time for tax season! Steven Zelin explained that you are either in business or you are just doing this as a hobby. Anyone from a studio owner to an individual freelancer working from home is, in fact, in business so it wouldn't hurt to have a little education in that area from time to time.

Zelin conducted his work-shop style event while casually perched on a desk and plucking away at his guitar as he discussed 1099, W-2, W-4, and 1040 forms and more. He opened with a parody song of "When You're Smiling," retitled "When You're Filing." Then, Zelin had everyone in the audience ask tax questions which Dayna Gonzalez scribed on the chalk board. The event stretched to three hours as Zelin addressed all those and more, but the evening felt more like a breezy 10 minutes. Who knew tax info for the artist could go down so easy? At the close of the event Elliot Cowan and Justin Simonich were practically demanding that this become an annual event. The challenges of being in business aren't going away, so maybe this event shouldn't go away either.

To sum up, three events running the spectrum from animation art to animation business. I was glad to be at all three!...all in a New York week.
Posted by David B. Levy at 11:49 AM

"During the seven years it took for that pitch to go to pilot production, Fran confessed he didn't really know his characters yet, nor was he sure they would work."

Although I understand why development executives want creators to know their characters inside out at the time of pitching, I think it's a major factor in the decreased quality of television animation.
Personally, it's wonderful that Fran was able to proceed without really knowing the characters.
How can you possibly know them unless you've worked with them a few times?
Sure, you can have an idea of what they should be about, but until you've dedicated some time to them they're never going to be real characters, they're just going to be cartoons.
I can't think of a one memorable animated character (from television) that didn't start off as one thing and become another, or become better, or become more interesting (or was dropped from the show in favor of someone else that evolved organically through writing and drawing).
Frans characters are no more or less interesting than any of the Simpsons were in season one.
Obviously, nobody is going to spend money these days letting a show develop like this...

You're exactly right, Elliot. And that reality is why I'm saying a creator can only rely on their proof of execution. Based on their past works the trust is formed which helps to seal that gives Fran a chance to make a pilot for Cartoon Network. Now, if he was given a series he and Will could develop the characters even further..

But, there is hope when Nick embarks on development plans like their "open mic." Things like that can speed things along and allow for more projects in the system and let creators instantly bring their characters to life in the 1-2 minute film.

Nick's development initiatives seem to be some of the best of recent years. With small, calculated risks everybody wins. My understanding is that they give creators a little more re: rights to the work on these small projects which can only be a good thing as well.

Our event with Steven was really great. I wrote more about it on the Exposure Sheet here:
http://asifaeast.com/ExposureSheet/2010/02/22/asifa-east-spends-an-evening-with-the-singing-cpa/#more-938

Tried to go to the Norstein talk but it was full and I was cast out into the street with nothing to do but eat burgers. I really wish I could have seen that clip from The Overcoat.