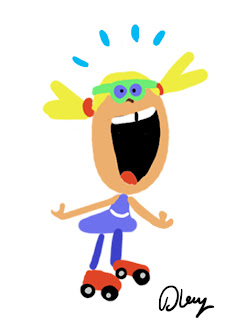 A big appeal of working in this industry is that we each have the opportunity to make our own way, to build the careers of our choice. Unfortunately, it's sometimes hard to distinguish between what we personally want and what others have accomplished. So many of us "like the idea" of having their own series, getting a children's books published, opening a studio, directing a feature, winning an oscar... the list goes on and on...

Complicating the matter further is that, within the NY animation scene are many individuals who have achieved these goals, so it's not hard to imagine or fantasize about following in their footsteps. Sometimes it's simply the thought, "I could do that too."

As creative people we could set our agenda to achieving just about anything. And, that's often the very root of the problem. In my career I've had a difficulty honing in on what I really want to do. On the positive side, I've been fearless about going after what I want, but on the negative side I've spread myself thin and set goals that didn't always represent where I might best spend my energies.

I imagine that lots of animation folks have this problem. How many of us know the exact path we should follow, eliminating all else? Personal development is a messy thing, full of twists and turns, and not the tidy series of events it appears to be on a resume.

So how did all this play out in my career? For starters, since I worked so often in preschool TV, the majority of my animation pitches tended to be preschool ideas. Looking back, this was not because it was my passion, but more because it was familiar. I knew the world, the rules, and was trying to capitalize on the time I logged working on preschool projects. It was an area where I thought I could be taken seriously. The problem is that preschool TV is concept and curriculum heavy with little-to-no room for character development or humor. So, developing preschool pitches left out some of my key interests, areas that would have given me a real connection to what I had created.

For the pitches I recently created with Xeth Feinberg, we focused on educational series for the ages 5-7 where there is a larger opportunity to add humor and character to the mix. The result? Xeth and I cooked up projects we'd be really excited to make, and not just because it would give us a job. We've already seen a few nibbles of real interest for our trouble, and in the mean time we are making a two minute film to even better illustrate one of our ideas. Because of our connection to the project, it doesn't feel like "work" for us to continue this way. Quite the opposite. We can't wait to get our hands on it and make a little film.

I'm also working on some pitches for Nicktoons (which caters to a 6-12 year old audience) with a couple of partners. Again, I have the amazing feeling of being in my element. Because I logged so much time trying to develop in other areas, I can really feel the difference when something clicks with what I want to do. I'm gradually learning the difference between "wanting" and "what I want."
Posted by David B. Levy at 5:56 AM

Really great thoughts on this subject, Dave. I think a lot of artists fall into this category, myself included. It's hard to know what you really want until you've seen what you DON'T.

Good point, Alisa. And of course, hindsight is twenty-twenty. Sometimes you just have to go through things to try them on and see what fits. I don't regret my energies spent even if they pushed me in the wrong direction. But, I sure would regret not trying.

I had a conversation over the exact same matters, over frozen yogurt, with a RISD comrade/friend.

You hit a home run on this, I have been thinking about this just today!

Inside me there's a voice asking "What do you want to do with your life?"

There are so much animation industry can offer, so many variety of jobs out there... it's tough sometimes to keep that focus of what one wants to do with their lives. It's easier to pick on what is provided and go with what comes our way.

I am so with you on this going toward an older age group for your pitches, I believe we all want to see cartoons for 6-12 being made here in NYC, if that's going to be a possibility.

Man does this post resonate with me. I think about this a lot lately as my life has changed so unexpectedly in the past couple years, taking me on a completely different gust of wind than I'd set out upon. LoL. Used to know what I wanted in at least the immediate sense. I decided to go to college on a whim and pursued it relentlessly. I did the same thing in regards to my last professional gig. But now I'm married, living in a foreign country. My dad died not even 2 years ago and I find myself totally not understanding what it is that I want right now. So I have no idea how to "get it" because I don't know what "it" is. Sigh.

Anyway, its really nice to see other artists struggling with similar things. It helps me take the pressure off myself. So.. Thanks. :)

Although my goals haven't been exacting, I've always known that I wanted to be a working artist since I was a little kid.
For years and years my parents were always keen for me to have "something to fall back on".
This stance didn't bother me at all because I simply knew, through what means I do not know, that I would be working as an artist in some capacity.