The Cunning of Christy Karacas 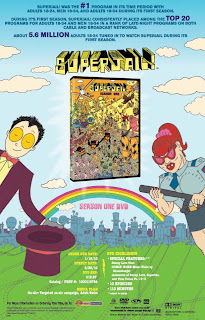 This past Monday evening, Super Jail (Adult Swim) creator Christy Karacas once again graced my SVA animation career class with his can-do spirit and inspiring story. Here is someone who seemed to be born trusting his own creative instincts. For example, when he needed to make a thesis film at RISD, he struggled with the process until he decided to play to his hunger for spontaneity by drawing random storyboard panels on index cards and then throwing them up in the air and assembling them in a random order. Christy said that this was partly inspired by a jazz musician he liked that worked a similar way. The result was the spontaneous montage of a film called Space War which went on to huge success on the festival circuit, indirectly leading to a job opportunity at MTV Animation.

While working as a background designer on Daria (because of a knack for perspective drawing), Christy heard about MTV's new plan to make a creative lab that would give money to staffers that wished to pitch a project. Not missing a beat, he and pal Steve Warbrick whipped up the concept for what would become their MTV-funded short Barfight. Christy told my class that he planned the short's content by catering to his own short attention span. "I get bored easily, so I like if a UFO can just drop in out of no where. I like to be surprised. I think what is the least expected thing that can happen and that's what I do."

Smoking gun #1: Notice how Christy's process was all internal. He didn't think, "What would MTV want?" or "What might the development executive want?" Instead, he and Steve planned and pitched a film they would enjoy making and watching, one that came from a personal place.

The MTV creative lab bit the dust before his film could be aired, so the filmmakers tried their hand at the festival circuit. Despite being popular among the NY animation community, Barfight did not go on to have any festival success, and for a time, Christy left animation and Steve took a job building animatics at Blue Sky.

Smoking gun #2: Could Christy have possibly known how short the window of opportunity would be for the MTV creative lab program? If he hadn't struck right away, there'd be no Barfight. And, while that may not have seemed important at the time, it sure turned out to be important later.

Years later, Christy was working as a package designer at a DVD company when his phone rang. On the line was someone from Cartoon Network's Adult Swim. "Are you the guy who did Barfight?" the voice asked. A few weeks later, Christy and Steve met with the Adult Swim exec in NYC and pitched an idea centered around a super jail. "Imagine the world's biggest jail run by a Willie Wonka type character," they said.

Smoking gun #3: Creators have to be able to sum up their creations in a short sentence as Christy and Steve were able to do. If a series idea requires three paragraphs of explanation just to be able to understand it, it usually won't be a compelling animated pitch, let alone a compelling series to watch.

Not only did Christy and Steve's instincts serve them well, they also delivered (with the help of collaborators such as Aaron Augenblick and his studio) what might be the most unusual animated TV series to hit the air since South Park. Best of all, this show helped keep NYC series animation on the map during a very bad time for the economy. Check out the odd pleasures of Super Jail season 1, newly released on DVD, and bring home a modern day slice of New York animation history.
Posted by David B. Levy at 6:46 AM

Watching Superjail is like being fed a nine-course dinner by a coreographed team of rollerskating waitstaff.Three of them bring out dishes, the next three stick spoons and forks in your mouth, and the last three wipe you off and whisk it all away. After just ten minutes have passed, you are guided out the door in a bewildered yet fully satisfied state.

Well said, David. I would add the show is like a violent ballet but with the violence so stylized that it becomes almost lovely. And, I'm not a blood and gore guy.

If someone cares about 2D drawn animation, they owe it to themselves to give this show a look. It could be the most "drawn" show in TV history, one that does not rely on stock poses, reused animation, or limited flash puppets.

I love Superjail! I can see the similarity in the Space Wars short.

By the way, I watched Ugly Americans (and the 5on shorts it was based on) and really enjoyed it.