The Remaking and Unmaking of Disney 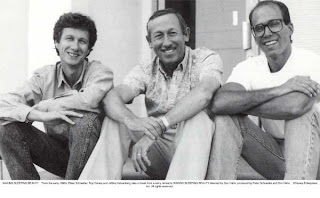 As young as the history of animation is (compared to the other arts), so much of its important history seems to be soooo far in the past. Challenging that notion is a new documentary feature Waking Sleeping Beauty directed by Don Hahn, chronicling the Disney studio between the years 1984 and 1994, a period where the dying industry of animated features was roused to new financial heights.

Peter Schnieder, the film's producer, remarked during a Q and A after a screening of the film at SVA, "We told the animators to believe you can do better than Walt." He went on to say, "In a way we did and in a way we didn't. But the important thing was to believe that we could." This was not only a pep talk to inspire animators, it was also a mission statement showing how much the thinking had changed at the Disney company.

The film describes the Ron Miller period of Disney as a sleepy little company slowly cranking out an animated feature every four years, and helmed by the remnants of Walt's original crews: sweet old men wearing cardigan sweaters. Back then a creative decision on a film would be answered by the question, "What would Walt do?" This would all change with Eisner and Wells at the wheel where it was understood that if the company was going to "win" they would have to abandon the notion of running each important decision by a dead man.

I was in High School when Roger Rabbit and Little Mermaid scampered, jumped, and splashed onto movie screens. It was amazing to see something that had meant so much to me suddenly be embraced by so many other people. Animation was big business again and Waking Sleeping Beauty tells that story, not the story of the animation artists. The way the filmmakers present it, the animators represent a herd of bodies to be moved from one building to another, waiting to be told what to do, how to feel about their work, and what to title their movies. But, don't feel too bad for them because during the good years that unfold, the animators get to buy BMWs too.

The big drama in this story came from the top. We can debate wether or not there should have been more artists included or identified (I vote that they should have), but to do so we might miss discussing the film that Hahn and Schnieder made. And, there's LOTS to discuss. At one point in the film, Bluth is labeled as "the man who kicked us when we were down," a reference to the 1979 exodus of artists that followed Bluth in resigning from Disney, something that setback the recovery of the studio. Yet, in retrospect, it almost looks like Bluth did Disney a favor. By whisking away all the malcontents, only the true believers remained. And, that was a necessary condition for the success that followed, one that was just as important as the hiring of Eisner, Wells, and Katzenberg.

Eisner and Wells were appointed by Roy Disney to save the Disney company from corporate raiders in the early 1980s. Waking Sleeping Beauty gives us a vivid and candid depiction of each man, showing their strengths and weaknesses and the nature of their relationship to each other. It seems that as each film grew to greater success, the strain between these four powerful men grew in tandem. The movie depicts them as hard driven men, each clamoring for credit and jealous of one another's accomplishments. Roy is depicted as having no love for Katzenberg, with the implication that he would have never allowed him to fill the position created by the untimely death of Wells. Meanwhile, Eisner makes the claim that if only Katzenberg had been patient he would have given the job.

One moment in the film sheds a new light on Roy's legacy. Waking Sleeping Beauty reveals another side of Roy, showing how his ego added to the mix and mess of the whole situation. There's footage of the memorial service just after Wells' death where Eisner is choked up while talking about his departed colleague and friend. At the end of his tearful speech he introduces Roy to the podium. What follows was fascinating. The situation was a memorial but Roy spends the first couple of moments grinning and laughing at the mic, teasing Eisner for not giving him a better introduction. "That's it?" he asks between chuckles. It's a moment of pure ego, one that can't be contained even for a moment.

Waking Sleeping Beauty shows how the artists and execs needed each other. Sure, each side had different goals. The execs' goal was to build the company into a modern media giant with animation as its engine. The artists wanted to do great works, to compete with Walt while at the same time follow in his tradition. Each side got to live out the fantasy, at least for a while.

According to Waking Sleeping Beauty, the period's creative VIP was Howard Ashman, the late lyricist responsible for much of the Broadway-style influence from Little Mermaid to Beauty and the Beast. Feature animation has always had a strong theatrical influence. Actors on a stage give "big performances" that can be read from the back row. Animators, by trade, over-exaggerate poses and gestures so they can be clearly read.

The Broadway musical is often a guilty pleasure, a celebration of schmaltz. So, when we see and hear that master animator Glen Keane insisted on being the animator for Ariel's I-want-song, "Part of Your World," the Broadway sensibility and a Disney animator's taste seem to be one and the same. Tellingly Katzenberg wanted that song cut from the film, but the creatives won the battle and the sequence stayed in. Such important artistic victories could happen at the start of this period. Makes you wonder who was minding the store during the Treasure Planet period that would follow. This certainly helps bolster Katzenberg's role in Disney's success because post-Lion King, the studio began floundering immediately.

I left the film feeling a bit sad. The power of Waking Sleeping Beauty is how it so vividly places us in the period that we almost believe we were there... and in a way we were there––in that we remember sitting in dark theaters, munching popcorn and slurping cokes when Ariel, Aladdin, and Simba first graced the screen at 24 frames per second. Make a point to see this film at NY's Sunshine Theatre (note the screenings that will include a Q and A with producer Peter Schnieder.)
Posted by David B. Levy at 1:17 PM

The documentary got me (and maybe some others) all revved up over this period of Disney animation again. The documentary does shed some new light on how these films were made, but it doesn't seem to tarnish the period in any way. Frank Wells' death pretty much shattered the relationships between the top executives, and as evidenced by the memorial service, all the conflict was exposed to the public.

But overall, its not a bad film. It is very informative. To artists like us, it might be disappointing not see as much in the creative area of Disney, but its just as informative in the overall workings of an untouchable castle as Disney.

Thanks for the review. I remember this period vividly. I don't know how many times I watched The Little Mermaid with my younger sister who got it as a gift. I loved it just as much as she did. I loved most of the Disney animated features from that era. I'm more accepting that things can't last. Maybe there will be another resurgence in 20 years.

Does Disney's success with the Pixar Films count?

I'll check out this doc if I can. Sounds great.

I am encouraged though from this film, Disney has shown how it has periods of ups and downs, just like any regular artists. Every time when its down, it somehow got up again from the people who really wanted to push for it. Again and again. I love the story of Glen winning the battle in keeping Ariel's song.

I hope for another "up" period for Disney's 2D animation after Princess and the Frog.

Like my mother's wise word, "success is always harder to handle than failure."
When one is not careful, success can be blinding.

I'm glad you pointed out Roy's ego at Wells memorial. I wasn't reading into that.

Emmett,
I feel the same way about getting revved up again for this period of Disney. For this first time in years, I'd like to revisit these films.

Francisco,
Disney's success with Pixar is part of Disney's legacy, but Pixar was responsible for their own creative agenda and deserve most or all of the credit for the content of their films... but, no doubt the Disney/Pixar connection has helped steer those films to success. Its interesting that since the merger of the two companies the Pixar and Disney brands (as well as their films and crews) are still separate.

Mayshing,
I find the film encouraging too. I love that this movie came out on the heels of Princess and the Frog.