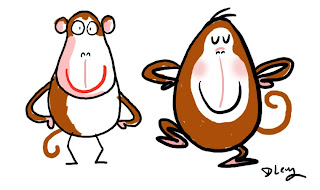 I have to admit that when I started I didn't know if there would be a place for me in this industry. Doesn't everyone have that natural bit of fear starting out? That was my mystery to solve but, once I got my first freelance job from then-SVA teacher/animation producer Mark Heller, the mystery was replaced with eternal gratitude to be able to work and earn a living doing what I love.

The thing that I've observed in my time in this business is that each of us define our own experience in this industry through (in large part) our own attitudes. If we think we're gonna get screwed or shafted at every corner, we'll put out an energy of fear, distrust, and self-defeat that can block opportunities for happiness and success in the field.

A few posts ago I wrote about Ian Jones-Quartey whose main career compass is simply to be open, trusting, and passionate about his art and work. He doesn't see the industry as a cut-throat place so, for him, it isn't. Discovering you have this power is like suddenly waking up a superhero, only without having to change your sheets.

I've made a ton of mistakes in this industry (just read my books to find a "greatest hits" of them) but, one thing I have tried to be consistent with is working with an open and positive attitude. To better explain this, a couple of stories come to mind that I haven't shared before. Not so long ago, I was doing a bit of Web animation for a leading kids entertainment company. The job started with an in-person meeting between me and four reps of the company (some producers, international execs, researchers, etc). At the hour-long meeting we set the creative direction for the animation. I left with a rough plan that I was to present back to them in the form of an animatic. This work took me two days, after which I presented the animatic to the client.

A day later, the main producer called me on the phone: "I have good news and bad news. The good news is that you gave us just what we asked for. The bad news is that the rest of the team changed direction and want to try something else."

I answered: "That's all useful news because now we have the benefit of having tried something and eliminated one possibility. That should help us nail the next version."

There was a brief silence before the producer spoke again. She was a little surprised to hear my positive attitude and I could already sense a lighter quality in her voice. Then I added, the only thing I ask is that the time I spent creating the first version be compensated. She agreed and we quickly arrived at a price. Next she explained that they planned to have another meeting to iron out the next version, saying I had the option of attending or not. Of course I wanted to be there!

A big part of what I love about being a virtual studio is that I get to participate in each job's creative planning and execution. This gives me more control over my fate and a personal connection to each job I take on. Attending meetings is also a fun excuse to get out of the house once in a while, not to mention a chance to help cement in-person relationships with another set of producers (both of which are important to getting repeat business).

I'm happy to report that the second stage of this project came off swimmingly, and better still, led to continued freelance with the company that I'm still enjoying today. In fact, this client turned out to be my main supplier of work in 2009, helping to keep me busy in a very bad year for the economy. Would all this have happened if I'd had a different attitude during the initial bumpy stage of the first job?

For another client, I once put in a total of two extra unpaid weeks spread out on either side of a long-term job to help organize the work and later to archive it. The job was for a start-up studio making a low budget series. I appreciated their trust in working with me and I considered the extra work I put in to be a part of my obligation to the project and the people behind it.

A good attitude and a lot of gratitude goes a long way towards helping us build the career of our choice, and at the very least, might help make up for the mistakes we will inevitably make along the way. Now, if I can only figure out which monkey above represents "attitude" and which represents "gratitude."
Posted by David B. Levy at 7:25 PM

after a several bad weeks of feeling royally shafted & disillusioned by this industry, I found this a very inspiring article to read - thanks for restoring some faith Dave!

well said. :D I look to you as a role model on this attitude and gratitude thing. Life is happier if one look at every twist and turn as a chance, not a mistake. :)

Dave, this post made me grin from ear to ear (and was just what I needed to hear as of late to remind myself of that way of thinking). Also, "Attitude" is definitely the one on the right!