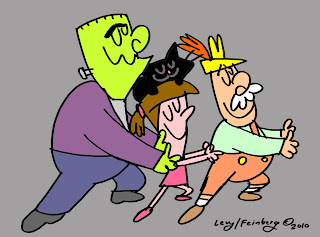 *image above from a new short created by me and Xeth Feinberg.

It's Saturday morning as I write this post and I've just finished animating the same three-character conga dance for the third time on my new indie film, a collaboration with filmmaker Xeth Feinberg. A few months ago I tackled a freelance job which had me animating a dance between two potatoes––something I had to animate twice to get right. In both the freelance job and my indie film, the problem was the same: I first animated the characters separately and then attempted to combine them later in After Effects. It didn't work then and it didn't work now. Perhaps this time the lesson will stick.

A while back, indie animator Pat Smith told my SVA career class the story behind his debut indie film Drink: He had to wake up early each day to steal a few hours to work on the film before reporting to his job at MTV Animation. It's hard to imagine a better example of the sacrifice it takes to make indie films, to fit them in to an already busy work life. You have to be a little bit crazy to embark on such an adventure. Only passion can force you to stay on course in light of every other possible way you could be spending your time. How else could I justify spending a lovely Spring morning animating a Frankenstein monster, a little girl with a cat on her head, and a European Villager doing a conga? Insert dirty joke punch line here.

I didn't plan on making this film. Xeth Feinberg and I had co-created an educational series pitch for ages 5-7 that we thought had legs. Although we had lots of good meetings before enthusiastic executives, there was no deal forthcoming. Usually one just stops right there and moves on to other things, but Xeth and I thought a bit of animation could help us demonstrate our idea even better. That bit of animation grew into a four and half-minute film which we are finishing up the end of this month.

So, on the third try, is the conga perfect? Certainly not. But, it's better. Nothing in the film "perfect." And, that's a huge part of the point of our film. Dora the Explorer is perfect in its own way... and perfectly successful. And, that same perfection––where every drawing is on model and every episode is sewn up in a rigid formula does not appeal to me. Yet, at the same time I admire its success and impact in the market. And, I appreciate that it provides an exact opposite area for Xeth and I to explore.

Why can't an educational series be character-based (in other words, based on an interesting character) instead of using characters as wide-eyed blinking props? And, while Dora is not a flash or After Effects puppet-based show, it might as well be, because the drawing is so contained and predictable. Instead, Xeth and I have made a film full of off-model drawings that celebrate hand-drawn animation in all its clumsy glory (in our hands, that is).

Will anything come from this odd hybrid of a self-produced pilot and an indie film? I have no idea. All I know is that it was fun to make and along the way I discovered how much I like to work with Xeth Feinberg. Success can be defined many ways. As my friend Elliot Cowan says: "You better like your film, because you might be the only one that does." In that category, we are already successful.
Posted by David B. Levy at 11:10 AM

I'm a big fan of "throwing out the model sheet". As Mike and I got set to do 7 new StoryCorps pieces, one of the guiding principles in our character design has been to create characters whose shapes can be quickly drawn and constantly rearranged in "off model" ways while still clearly being the same character. I've found it a much simpler, more fun way to work that also seems to yield better results.

I agree with you that it rarely works as well to split up your characters when they are doing something that requires such close interaction (like doing the conga dance!) ... also, it is a lot simpler to draw them on one level and you can have more fun doing a bit of straight ahead animation when they are all together. I hope your film lands you a series!

The problem with working with computer programs is that it encourages limiting animation. To do a dance it's imperitive that the characters interact, and it's impossible for them to interact well when they're mechanically divided (essentially to try to make animation easier.) You're making the film for YOU more than for anyone else; take the long way around.

Tim,
I think that "constant rearranging of shapes" is the cornerstone of what makes something fun to watch, and (of course) fun to make. We should come up with a better phrase than "off model," something that does this justice. : D

Johnf,
It truly was a lot more fun to draw those characters together. Fun is the whole point, too. I think it is important that filmmaking be enjoyable, despite the huge amount of work and challenges.

Michael,
Well said. The long way around was the right way. I wince when I realize that there's moments when I use the computer as a crutch... especially in light of the fact that I'm hand drawing everything. My view of the computer is that it works best as a composite, camera, and exposure sheet tool. I don't want the computer to be noticed outside of that, nor be a temptation to take short cuts that undermine my effort. Gotta fight the occasional lazy factor. : D

I think with Dora the Explorer and educational kids shows in general it's probably more important to stay "on-model" simply for the sake of the target audience. Children take comfort in familiarity and require consistency in order to comprehend. Look at Thomas the Tank Engine - it's seriously the same 2 or 3 faces and bodies mixed and matched with different colors and every little boy I know LOVES it.

With visuals, we're catering to the comprehension level and interests of the target audience.

In Animation class, Beckerman insisted that when we did exercises involving interaction that both characters were animated together. This helps us visualize effective silhouettes - which subconsciously aides viewers in understanding the tone of the entire interaction. Sure, one character may be handing one a letter, but the curves created by that action directly relates to the overall feel, a downward diagonal might foreshadow bad news, an upward bounce might connote something jolly.

Similarly, for one project I'm currently working on, I used an AfterEffects effect to make an object vibrate. The director disliked it very much. But when I animated the object using my own sense (and a little bit of blur, tactfully applied) he loved it!