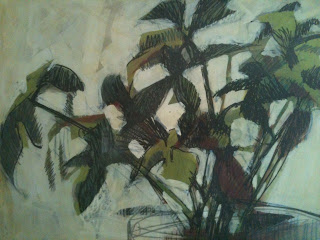 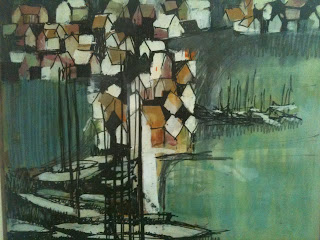 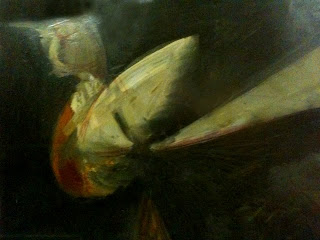 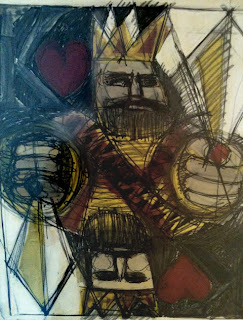 Above is a series of four paintings my dad made over one week in 1963. Two years out of Cooper Union, he was working as an art director at a small ad agency. During a rare slow week he used his time to make these paintings with whatever art materials were nearby. Over the years these works have hung in my family home, so I grew up looking at them. Since my career began, they took on new meaning to me––sort of like symbols of the artistic work I could be doing in between my professional obligations. My dad didn't make these paintings to be a fancy painter exhibited in a gallery. These were works created just for self-expression. Instead of taking a three martini lunch, like you see in Mad Men, he stayed at his desk and quietly painted.

Unfortunately the nature of independent animation (as opposed to the act of making an individual painting) can nudge us away from the personal in favor of the commercial because why go through all those hours, days, weeks, months (even years) of work to make an indie animated short if it doesn't have a commercial value? We want our films to be everything at once: magnets to draw paying projects and prestige art pieces to win us respect from our industry peers. Both of these are simply forms of approval. But, I have learned (the hard way) that seeking approval in a personal film, as a reason for making it, is the kiss of death. It won't likely lead to a good film, let alone a great film.

Don't get me wrong, purposefully making an indie animated film to coax new career opportunities is perfectly fine, especially if you are honest with yourself as to your intentions. All my films, even the ones I regret on a creative or artistic level, helped me along in my animation career. And, I'm sure I'll continue to make the occasional film as a commercial sample. My recent film with Xeth Feinberg is such an animation, and I think our short will work great in a network pitch meeting, and maybe even score some success on the children's film festival circuit. But, as much fun as that project was to co-create, it's commercial purpose (to get us a series) was the reason we made it––so it's not exactly close to my heart. In a way, its made-for-the-market intention made its production similar to working on any paying job in the industry––sans the fact that we wrote it.

Ultimately, I'm just suggesting that we understand our motivations for making films because the clarity I have on this today has been very helpful. Early on in my side-career making shorts, I thought that any indie short I made automatically had credibility has a personal film just because I'd made it. How could it be otherwise? But, now when I make a short I better understand why I'm making it. No film, or any work of art for that matter, can be all things at once... so if I know what I'm trying to achieve (or say) it gives me a clarity of purpose and realistic idea of what I'm creating and why.

When I made Good Morning, which is my most successful short to date, all I thought was: I can't wait to show this to my wife, who happened to be busy in another room of our apartment. When she walked over I was ready to surprise her with 8 seconds of finished animation. She and I were the only audience I cared about. I wasn't trying to show off, make a masterpiece, or create a breakthrough film. With my new short (an animated documentary about my family) I'm living in that satisfying world once again, making a film for self-expression, and maybe feeling a bit of what my dad felt when he made those four paintings just to please himself.
Posted by David B. Levy at 8:20 AM

Your father's paintings are excellent.

True, Michael. And, I think that difference is what attracts many of us to animation the first place. Animation encompasses so many different things. It can all feel so overwhelming, so I'm trying to inject the spirit of simply making something for myself into my current film. And, it has helped to keep it fun and exciting.

Michael - Is this a matter of fact or simply your spur of the moment opinion?
The sensation one feels after completing an artistic endeavor is an incredibly personal thing.
I'm not sure you should be so definitive.

Elliot, sisnce I am the only person in the world and everyone else is a figment of my solipsistic imagination, of course, I am just giving my casual opinion.

Thank you for letting me play this small role in your subconscience.

I'm not sure if my last comment went through but the gist of it was that this was really great insight. It's given me a push to examine what the intention is behind my animations and illustrations. I think this touches on a thought that I really hadn't explored much until now. Also, the paintings are beautiful. It's great that you had such wonderful inspiration surrounding you growing up.