The Return of Chris P

During my years as a student at SVA, there were two superstar students capturing everyone's imagination. One was a year ahead of me, named Chris Prynoski (pictured above in cartoon form), and the other was Aaron Augenblick, two years behind. Despite not being in any classes together, I got to know Chris P quite well because he was always around, logging long hours in the animation room, and helping and inspiring underclassman like myself.

With his beard, fisherman's hat, shaggy clothes, constant smile, tendency to say "right-on," and an original artistic vision matched only by his killer work ethic, Chris P was a combination of the best aspects of 1960s hippie culture mixed with the DIY early 90s indie film spirit.

My first introduction to his animation was when my second year instructor, Don Duga, screened a tape of the previous years work, where two Chris Prynoski films were represented. Imagine that. He made two films in his second year! And, more amazing still, they were both good!

As good as his second year animations were, nothing topped his wonderful thesis film, Card Table Tales, which was framed around stories told by residents of an old folks home. It seemed the entire senior class worked on Chris P's film. It was as if he was running a mini-production studio from within SVA, where students flocked to him in droves, just wanting to be around his energy, talent, and good vibes.

In my senior year at SVA my career class instructor, Linda Simenksy, took us on a few studio visits. One of our first trips was to a now long-defunct studio (Vangard?), and who do you think was sitting there animating on a project when our class walked in the door? Chris P, of course. There he was, just out of school and still inspiring SVA students––now by his success in the field. A couple of months later we visited MTV Animation, then in its Columbus Circle digs, and who do you think our class passed by as we wandered through the MTV halls? George Clooney. No, that's wrong. It was Chris P once again. He was just beginning his many years residency at what became NYC's largest animation studio of the 1990s. 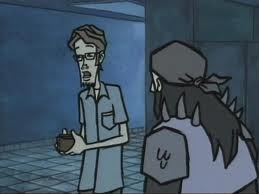 As many already know, Chris P became a key player at the bustling studio, helming the hallucination sequence of the feature Beavis and Butthead Do America, and more importantly, creating the original and highly regarded series Downtown (pictured above). During much of his run at MTV I was working downstairs in the same building, on Blue's Clues, so Chris P and I would occasionally meet for lunch. It was fun hearing stories about his growing responsiblitiy at the studio. For all the misteps MTV would take, they did something right by having talent around like him.

While I was working on my indie short, Snow Business, I would sneak up to MTV Animation to use their video pencil test to check my scenes, where Chris P would sometimes saunter by and then sit with me the whole time I was shooting. He was still the same guy that he was at SVA, interested in what everyone was doing, and forever encouraging.

After MTV bit the dust, Chris P relocated to L.A. where he directed series for Cartoon Network (Megas XLR), and launched his own successful studio, Titmouse, where he helmed series for Adult Swim (Metalocalypse, among other series and projects). Unless you've been living under a rock, by now you've heard that Titmouse just opened a massive animation studio in downtown Manhattan, where its already starting to tackle a few series orders. The artist-run operation of Titmouse is in sharp contrast to the Gulag-inspired studios others have set up in this town. Given the choice, now that Titmouse is on the block, where do you think people will choose to work? 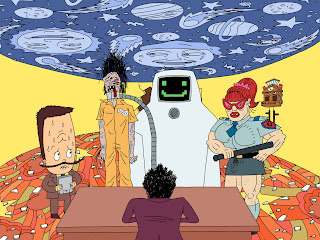 I got a chance to say hi to Chris P and his studio co-owner, and wife, Shannon Prynoski (also a former classmate from SVA), at a huge party this past Friday, launching their studio and kicking off the production of the second season of Super Jail (pictured above). It seemed as if almost everyone in NY animation came out for this party: indie superstars, students, rival producers, veterans of MTV animation, and proffesional NYC animation talent of all stripes. The evening was kind of like that scene in Bambi when all the animals came out to meet the new Prince of the Forest.

Cartoon analogies aside, there was hope and promise in the air that night. The vibe was a lot like the kind that surrounds Chris P himself. This is no accident. Studios are always a reflection of their owners' personalities.

I have been a big fan of Chris Prynoski's work ever since the 'Downtown' days... He sounds like a great guy, too.

I am very excited that Titmouse is
now an official part of NYC animation.
(Welcome back, Chris!)

I am sure that great things are in store... Very cool!

Just checked out Titmouse's site and didn't realize how much they've done that I recognize. Love to hear a good success story featuring a good person and an artist.

Seems like the it's a better time for animation these days (since the days that MTV animation studios closed) I love Superjail! I also love Ugly Americans.