The Challenge of Doing Business 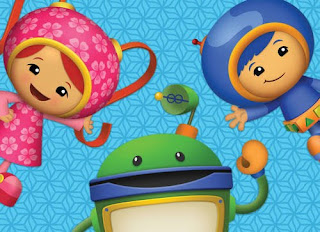 *image above from Nick Jr's Team Umizoomi, a production at Curious Pictures.

If Animation Collective, Little Airplane, Stretch Films, Jumbo Pictures/Cartoon Pizza, have one thing in common it is: none of them have ever made me a grilled cheese sandwhich. No, that's not it (although true). They are all studios owned and operated by creators whose own shows were their biggest and often only (by intention) productions.

As successful as all these above studios have been or are, businesses organized this way tend to run into a common problem. No matter how brilliant an individual creator is or how successful he/she is at selling pitches, there's going to come a time when there's a lag in production, and the rent on big studios costs just as much empty as when they're full.

In contrast to the above, Curious Pictures is set up as big diversified media production company animating games, commercials, as well as TV series created by others. Even though Curious has been the home of such creators as Mo Willems and Tom Warburton, they were not partners or owners in the overall company. After their series orders were delivered Curious Pictures survived on.

New studio Titmouse East, and older studio Aaron Augenblick Studios Inc. could be seen as creator driven studios being that Titmouse's co-founder and president Chris Prnoski had his own series on MTV, and Aaron Augenblick is a filmmaker, writer, and creator in his own right. But, the difference here is that these two folks didn't set up studios exclusively as vehicles for their own brainchild productions.

Creating and pitching a series is one thing, but relying on that success to keep a business running at its current size is quite another. No matter who is at the wheel, it seems like only a matter of time before the reality of an empty studio creeps in. Us animation artists are seldom confused with being good business men or women and the reality of a creator-run studio often backs up that cliche. I think this has a lot to do with ego, because creators (by design) are single minded people carried forward by their ambition. In that frame of mind why would there be room for partnerships with other creators? That's too bad because a real collective (not just a studio that happens to have the name "collective" in its title) would have a better chance to succeed in the long-term by having a group of savvy creators at the helm.

Creator-run studios helmed by individuals are not the only risky model of the big studio in NYC. MTV Animation and Nickelodeon Digital Animation were our largest employers for a good ten years or more. But, what happenned when the halls emptied out between projects? Add to that the fact that not all their shows are going to be major money-makers a-la Beavis and Butt-head and Blue's Clues. Sprinkle a few bad decisions to that mix, such as the MTV Animation development exec that turned down South Park in place of Spy Groove, and you have a recipe for trouble. An insider at MTV Animation recently told me that, while they try to do as many projects in the city as possible (such as Team Umizoomi at Curious Pictures), they will never again be in the studio business because it is simply too expensive here.

So as creator-run studios come and go, and with the network studios seemingly a thing of the past in this town, what kind of animation businesses can work in the big apple? Clearly virtual studios such as The Rauch Bros. and Alan Foreman's operation have certain advantages that I have written about here, but in addition, nimble boutique-style studios (which have flourished in this city since the time of the Hubley's) have the advantage of low operating costs that help them survive in lean times. Production of pilots, commercials, and short-form series are still a viable means of production for a boutique studio, a virtual studio, or even for a large company such as Sesame Workshop. The latter is currently engaged in an ambitious many-years production called Sesame English which not only employs a small in-house group of animation artists, but also farms out large orders of short-form series animations to individuals or to virtual studios such as mine.

The reality is that when a project is relatively simple (in bite sized bits like the Sesame English scenario) there's probably a cost effective way of producing it in NYC. Oddly enough, the exact opposite also seems to be true. As illustrated by New York's Curious Pictures productions' Little Einstein (Disney Channel) and Team Umizoomi (Nick Jr), these two shows were as expensive as they were complicated, both involving innovative and creative combinations of Flash, After Effects, Drawn Animation, Maya, and (in the case of Umi's), Live Action.

ASIFA-East held a panel on Flash animation production in 2005 where then-Little Einstein's director, Steve Connor, advised would-be creators to devise very complicated-to-make ideas because that way it could only be produced by an expert crew working in-house. Connor's words proved true again on Curious Pictures next production(Team Umizoomi), but there's a catch to this model of work. It requires a deep-pockets client like Nick or Disney to agree to fund such an expensive series. For example, PBS Kids series have far lower budgets (they only kick in up to 30% of the budget), requiring a studio to pull in cost-reducing partners like Canadian studios.

So, there is truly no one magic answer to the challenge of doing business here... but, in the mean time, studios like Titmouse, Augenblick, and Curious Pictures are doing a kick-ass job of producing big animation projects, without being a network studio, and without having to have created the shows in the first place. And, that has equaled something pretty damn important in any economy: jobs––helping us buy our own grilled cheese sandwiches.
Posted by David B. Levy at 11:23 AM

If I were in it just to do a job, I might have killed myself a long time ago. I do it because I love animation and love the people working for/with me. It's a killer raising the monthly nut and I've faced bankruptcy endless times, but I expect to still be here for more years to come. You have to be tenacious for this business if you want to continue.

It seems to me that the demand for animation has shifted over the last few decades as well. Back in the 90s it was series and features that were taking up most animators' time and skill, whereas now just about every TV or web commercial has some form of animation. Clients are looking for a 'unique' look rather than the traditional cartoon style everyone used to associate with animation. Creating that unique look is much more conducive to the boutique studios you describe, as well as allowing independents and virtual studios to play the game.

"In contrast to the above, Curious Pictures is set up as big diversified media production company animating games, commercials, as well as TV series created by others."

That's why I think video game companies do so well, there are writers, animators, live actors and directors, programmers, musicians, designers - pretty much every creative position under the sun.

The creative mind likes to be interacted with, engaged. Everyone I know who creates in one medium also creates in another, and personally, I sometimes get ideas for a drawing while writing, or a concept for a story while playing guitar.

It's stifling to force creative people to do the same thing over and over without allowing them to flex the full breadth of their muscles. The energy just dies down taking the small animation studio down with it.

The reasons you describe about why people feel stifled on jobs is why the best places to work can be the small studios. Be necessity they need workers who can juggle various skills and talents, and often, what you can learn at a studio like that is far greater than what you can learn at a big studio. I think this is especially important at the start of a career. You can always bring that skill set to the big studios later.

This was helpful and insight article for me, David, particularly right now. As I stew about the drying up of teaching positions, I think about maybe having to try freelancing here in Providence. Then I think, "hey, there are so many talented people around me, maybe we could form something like a small co-op studio." The idea of sharing creative/administrative decisions really appeals to me. So, your thoughts are both sobering, but also hopeful in how you're pointing out the pros and cons of the "small and nimble" to the extended and enlarged systems. Hmmmmm.