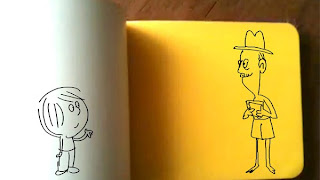 Call it a symptom of being part of the New York animation scene that I have always gravitated towards the animation heroes that develop their own unique approach to the art form and carve out a singular career. Our town, maybe more than any other animation hub in the world, has a thriving indie animation community, not to mention the fine arts, music, theatre, dance, film and TV communities that also exist here. In the Big Apple, culture is in the very air we breathe, although sometimes replaced by the scent of wet gingko leaves after a good rain.

But, despite the obvious benefits to an animation artist living and working in this town, nothing really happens unless you make it happen. A former student of mine, who is working at a full time job doing animation design, recently posted on facebook that she knows she should be doing some art on her own but can't seem to find the motivation. I suggested she ask herself if she'll be satisfied doing the same exact work she's doing now ten years into the future. If not, a great way to ensure she will have better and more diverse career opportunities is to develop her talents outside of the workplace.

A key motivator for me has been the desire to work in different ways on diverse kinds of animation. I've tried (and failed) to replicate the late 90s Cartoon Network look in a couple of films, but my latest film, "Grandpa Looked Like William Powell" (pictured above and below), is my first 100% personal work, delving into my family's history for its subject. I recently showed a work-in-progress chunk of it at a panel event, where I was delighted to see it make a strong connection with the audience.

Most films of this nature are usually about family members caught up in big events (like a war or the Holocaust), but not my film. Instead I tried to cobble together a study of a life (my Grandpa's) and explore my connection to him. It was a surreal experience recreating some events from my past as well as moments from my grandpa's life that happened long before my time. It felt as if the real people were winking back at me from my cintiq screen. Besides what it meant to me personally, it was a wonderful exercise in storytelling and filmmaking, one I would not have had without embarking on this project. 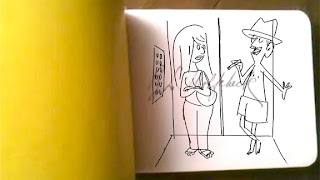 Another area of interest for me is comedy. But, you wouldn't know it by watching my films because I never really found a way to bring my sense of humor out in my animations. Indie animator Signe Baumane recently remarked on a great podcast interview by Alan Foreman and Joel Frenzer, that she understands Bill Plympton's famous 3 rules of successful animated filmmaking (short, funny, cheap) but takes exception to "funny," because what she thinks is funny others may not laugh at. Signe's right. Comedy is subjective, so an animation that manages to be funny to the majority of viewers is going to be pretty special indeed.

Last week, my pal Xeth Feinberg wrote me asking if I'd like to collaborate with him again, this time maybe on a funny cartoon. So, we started e-mailing script nuggets back and forth––just little bits and pieces of ideas we had lying around. Now we're committed to making a little anthology film together, made up of these creations, each one fully vetted and improved upon by the other. If we make each other laugh, that's enough. While comedy is something that's been a corner stone of animation since the very beginning, how often do you see a cartoon that really makes you laugh? There's that dissatisfaction again, motivating us to attempt a funny cartoon from our point of view. Just like my advice to that student, developing this side of my writing/filmmaking might give me a fighting chance to grow new opportunities ten years from now.

Everyday is another excuse to work on something for yourself. Just like going to the gym, it can become a consistent part of your daily routine. Besides all the obvious gains it creates in a career, the best part is that it makes each day more fun and artistically satisfying. Just don't wait to start tomorrow. Tomorrow is always too far away.
Posted by David B. Levy at 12:01 PM

"I suggested she ask herself if she'll be satisfied doing the same exact work she's doing now ten years into the future. If not, a great way to ensure she will have better and more diverse career opportunities is to develop her talents outside of the workplace."

Very true. Allan and I have discussions along these lines almost daily. Well written article! Looking forward to seeing your new film and collaborations as well.

Thanks, Alisa. Glad to hear you're thinking about these issues too. I'm excited to see where your career takes you! You're a big talent...

David! You are a hilarious person, and I'm surprised that you feel you can't bring it out in your animation. Maybe it has a little to do with words and performance being key to your humor. Have you considered doing a sort of stand-up, and animating to that? Even if you got someone else to perform the monologue / script, I'm sure it would be extremely funny. Animation tends to lose its comic edge in the process. That's why the script is a good driver for comedy, before all those complications set in -- I know you weren't asking for anyone's advice, but the script will set you free!!!