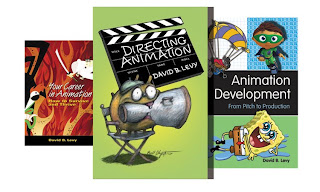 It would be a missed opportunity not to use this space to announce that my new book, Directing Animation (Allworth Press) finally drops this week on Tuesday November 2nd! To celebrate the occasion, I'm moderating a panel on the subject of directing animation at the wonderful Museum of Comic and Cartoon Art (MoCCA) on Thursday November 4 at 7 PM. Joining me will be a great panel representing most areas of directing I cover in my book: David Palmer (TV series director), Dan Meth (Web shorts director), and Bill Plympton (Independent director). Click here for the full details on the event. You can buy the book at Barnes and Noble or at this amazon link, but we will also be selling the book at the MoCCA event for your convenience.

I hope you get a chance to check the book out. While great new books on the art, craft, and history of animation come out every year, I'm certain there is no book out there like mine, which explores the human side of working as a director in this industry––something the other books don't touch. I find this very baffling because the animation industry is a "people industry," one where we depend upon each other for work opportunities as well as in day-to-day collaboration to get the job done.

I've already written about my goals with my new book at this past post, so I thought I'd use this blog entry to excerpt a short passage from the book. If you've read my previous books you already know that I like to write in a conversational style where information is related in sometimes cautionary, sometimes inspirational, stories and anecdotes. Besides, since I'm not an intellectual or an academic, I can't write any other way. Best of all, these books gave me a great excuse to go through my personal library of mistakes so that the reader might benefit from them. So, without further ado, here's an excerpt from Chapter 6: Directing Animation for Television Series:

After working as an episode director, responsible for directing half the episodes in production, and working under a supervising animation director for six years, my first experience working as a supervising director on a television series was a major step forward in responsibility. The series, an animation/live action and puppet hybrid, was the first time I was exclusively responsible for building an entire production pipeline from the ground up, staffing the entire animation crew, deciding the order in which episodes passed through production, making the delivery schedule, and managing and directing the daily workflow. On top of all this, I was even responsible for such preproduction stages such as reading and giving notes on scripts and looking out for animation needs on a three-month live-action shoot.

The production was a happy one and went with nary a hitch or hiccup...until the production's end. Over the ten-month production we went through three editors, none of whom (unknown to the producers or me) had left a detailed log of what final revisions got cut into what master tapes. The series was cut on Avid and the network deliverables required three beta masters: one for back up, one for domestic, and one for international.

We might not have discovered the problem if not for another deliverables issue that came up toward the end. The producers hadn't fully read or didn't understand the network's deliverable requirements, which is a detailed list of factors that affect the final product. Such a list should be read at the start of a production because it casts implications on many technical and creative decisions. The deliverable requirement that bit us on the butt was the restriction that there were to be no written text on our puppet sets. Without knowing that rule, the sets featured numerous words and signage that our puppets and live-action actor crossed in front of again and again in nearly every scene. Instead of enjoying a pleasant wrap to a smooth production, the last weeks became a stressful scramble, making frame-by-frame masks and patches to paint out any text from the live action shoot.

As we redelivered previously approved scenes to edit, someone noticed that some beta tapes had been regularly updated and others hadn't. In short, for each of the ten shows the three beta tapes were not the same. This was a real pain in the neck and there was a lot of private discussion amongst the senior staff on the best way to handle the problem. I advised the producer to wipe the beta tapes since there's no way to match them up and ensure that each had the same frame-by-frame sequences. Instead, I suggested that we fix the show in the Avid suite and then re-export to make the final betas.

For a week or so a final plan still hadn't come together. Late one evening, with all of us still at work digging out of this mess, the producer called me into an impromptu meeting in edit. I walked in and sat on the arm of the couch, which was the only seat left in a room already filled with the editor, producer, executive producer, and two associate producers. The producer was very emotional and vulnerable at this moment and everyone seemed to instinctually know that, presenting their best face forward, all speaking supportively to what the producer wanted to hear. "We know how hard this is for you, and however you decide to fix it, we'll help you with it," said one associate producer. Everyone echoed similar sentiments. The editor went one step further and repeatedly pet the producer on the knee as he cooed supportive words.

When I tell this story in my School of Visual Arts career class, by this point most of the students shake their heads in disbelief that all these professionals would act this way and "baby" someone instead of being straightforward. But, in reality, however, they were not babying the producer (outside of the petting), they were being sympathetic and understanding; they had the tact to see the moment for what it was. It was the time for soothing solidarity, not the time to rip off the Band-Aid. But I already had my hand on the Band-Aid, thinking I was to be the voice of reason.

When the producer turned to me to weigh in I said, "Wipe the tapes, fix the shows in the Avid, and export to new tapes." The producer, turning red, leaned toward me and raised her voice, "I can't listen to you because you don't understand what I'm going through!" At that moment, the purpose of this meeting finally hit me. If I had put aside my own thoughts for a second, I would have been able to see that this was not the time to lay down a blunt set of instructions. In one way my mistake was evidence that I was operating in a new arena. As a supervising director responsible for the animation on an entire series, I was now expected to weigh in on such topics at important meetings, ...and having the right answer was not as important as giving the right message at the right time. It doesn't mean that one has to be dishonest or play games, instead it shows the importance of being able to read a room and offer up one's plan in the best way so that it might get be properly heard.

The next day we implemented a plan. We would wipe the tapes and reexport from the Avid, but first we would take turns watching the tapes and logging any mistakes we saw to order up any additional retakes we'd want from animation. The production was extended by about two weeks to accommodate this effort and in the end we were confident in the final product delivered to the network.

I share this story because I can't stress enough that these situations and challenges, are as much an animation director's responsibility as asking an animator to add a little more squash before the character jumps into the air. As much as each director helps define his role and no two productions are exactly alike, a director can't be a success by ignoring all the non-fun duties that go with his title. The producer and I have worked together on three subsequent projects and share a high degree of mutual respect, which comforts me and demonstrates that these missteps need not prove to be fatal, especially when you're willing to learn from them.

Another excellent book. I'll make sure to review it this week to tie in with its release. Keep 'em coming, Mr. Dave.

Thanks, Michael! I'm very much looking forward to your review.

I've added Phil Willis's comment here since I thought it was relevant to this post as well:

"Wow. Thanks David for being so frank with your insights. When people say certain jobs are about "politics" I'm pretty sure this is not what they had in mind. I really enjoyed your first book - in fact, it's partly responsible for me getting into feature animation. Looking forward to the new one. All the best" --Phil
By Phil Willis on Directing Animation: a preview at 3:38 PM

The excerpt you posted looks fantastic. Your first book was outstanding and extremely helpful to me. It looks like you've done it again David. Thanks.

And you wonder why the entire Post-Production department up and quit all at once.

Mark, the quitting editors in this story all left a couple of months apart, not all at once. One left to go to law school, so I think in his case it was just needing a change in life.

David,
I Just got your new book this week. So far it is great. While I love your other 2 books, this one has a lot of information I can definitely relate to.
Thanks!
Matt