Recent Gig as a Case Study 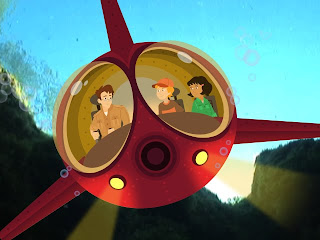 I just finished up a big gig that encompassed all my virtual animation studio phillosphies in one. The job was directing an eleven minute film for a Southwestern state's conservation division. Now, bear in mind that I have no agent or rep, nor do I look for work in a conventional sense. So, how do I find jobs? Like most animation artists, word of mouth is the main method. But, in my case, I add a healthy does of networking through coffee meetings and lunches, and also by pitching and promoting personal projects and attending animation related events.

A year ago a producer friend introduced me to a designer/creator who was assembling a pitch property which required a minute of animation. The budget was super low and the work required about 3 solid weeks of my time, but because of the good credentials of the people involved, I jumped in. The animation turned out very well and a few months later its creator engaged me to animate another snippet for an additional pitch project, again with a tiny budget.

The creator/client tried to hire me a third time but I confessed that I wasn't the best fit for her new job and was able to recommend two friends who snatched it up. Now its a year later from our original work together and she's about to throw more animation my way, a continuation of the first project we collaborated on.

But, best of all, a few months ago, she recommended me for the major gig I mentioned at the top of this post. Purely on her word, her contacts at a state agency asked me to bid on their animation project. My bid, which only took a day or two to prepare, involved creating redesigns of three characters as well as a letter/production plan itemizing the steps, costs, time, and money associated with each stage of production. After three weeks of waiting I was awarded the job, which allowed me to enlist some of my favorite workers/friends: Jason McDonald (Design), Hilda Karadsheh (animator), and Dale Clowdis (Animator). The 11 minute production went incredibly smooth and took about 2 months.

So to sum up, using this gig as a case study, here's the method I'm using to round up work for my happy little virtual studio:
1-No need for agents or reps.
I'm of the mind that a small studio owner attracts a lot of work through his/her own reputation and personal relationships and business dealings. I don't need a slick agent or rep to muck that up. Not that I'm anti rep/agent. It's just that I'm perfectly capable of mucking up my own relationships, and if its me doing it, at least I know the mistakes I've made and therefore have a chance to fix them and learn from them. And, as for reps/agents, I'd gladly employ one in the right area if needed. But, for now, I look for work organically just by making casual lunch and coffee meetings, keeping in touch with contacts, developing and promoting my personal projects, etc. None of that ever feels like work to me, it's just plain fun!

2-Small jobs lead to big jobs, or, at least, repeat business.
I'm more than willing to squeeze in the time to tackle small jobs with low budgets, even if they make short-term big demands on my time. I consider it planting seeds for a relationship, so why not start with a small project? It's a great way to see if the client and I are on the same page. I did the same thing with Sesame in 2008, when they hired me to create a small web animation. After that humble beginning I was awarded dozens of additional contracts at Sesame, spread across three divisions of the company. All this adds up to: Don't automatically poo-poo the smaller jobs, and DON'T ever get hung up only taking work if it lives up to your so-called "day rate." I've never had a day-rate because I know that each project has its own budget. Day-rates are starting points at best, but never a means to reject a project outright.

3-Expand your horizons by working for clients outside of New York.
And, I'm saying this as a booster of the New York scene. The fact is, local work can dry up, no matter how well you are connected to the workstream. So, I'm more than willing to work for clients spread out across the country. Since 2007 (the start of my virtual studio business) I've worked for clients in Los Angeles, Boston, San Francisco, and, most recently, the south western state profiled in the job above. By being the "face" of my own studio, all the networking I do ensures that I am my own studio brand, one that can attract work in faraway states without needing a rep/agent.
Posted by David B. Levy at 8:17 AM

I'd be very interested in hearing about the process of coming up with a budget. Are there any good resources you can point me to regarding this aspect of running a virtual studio?

I am very non traditional when it comes to figuring out a budget. For me its based on how long each process takes, how fast the client needs the work done, and the purpose/outlet of the final product (indie projects are funded by individuals and have the lowest budgets, web or podcast animations are the second lowest budgets, then up the ladder to TV or commercials). Each budget is different and requires its own formula based on the above... but, for nuts and bolts budgeting of a small studio, go to Richard O'Connor's wonderful blog at: asteriskpix.blogspot.com/

If you look at his past postings, you'll see lots of stuff on calculating budgets.

I think you have another book here, Dave. The art of the animation budget. It's something that's never been done although Richard O'Connor did do a good job of it on his blog.

Good idea, Michael. I'd so want Richard to write that. He could really do an amazing job with it. I love his posts on the subject. My version wouldn't be as helpful because I'd fear that I'm not business man enough.

Really enjoyed the post. I've been in many similiar situations, and it's always great to read about a good turn of events. Congrats on the project!

Thanks, Joe! Rock on with your projects. I always hear great things about you and your work.

Arts in the Family said...

Nice job on the animation for the dvd. Nice work.

Cool to get your comment, Alberto! Loved your voice! A very warm and friendly character to animate to.