Of Geeks and Go-Getters 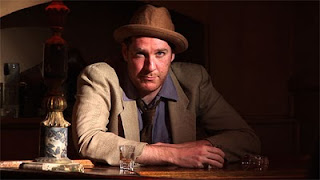 “Make the kind of work you want to be paid to make.” Super Jail co-creator Christy Karacas has said this time and time again to my SVA Animation career class and I’ve come to think of it as, perhaps, the single most important bit of advice one could give on creating a happy and successful career in animation. I’ve mined this topic before on this blog, but think it’s well worth revisiting.

Writer-Comedian Kevin Maher (pictured above) is the host of a long-running series at the 92nd Street Y Tribeca called ““Kevin Geeks Out.” Tackling such subjects as Aliens, Rip-off Cinema, Big Foot, Robots, Dummy Deaths, and Sharks in hysterical, fanatical detail through power-point presentations and rare footage not available on YouTube, along with his warm, witty, and insightful live commentary, "Kevin Geeks Out" makes an infectious celebration out of the most trivial pursuits. If that’s not enough, he also serves snacks. In between “Geek Outs,” Kevin is a frequent blogger, where he shares more of his obsessions in videos, essays, and interviews like this, and this, and that.

The work required to put on his show and maintain his blog is a labor of love, something Kevin does as a sideline to his busy career as an Emmy-nominated comedy writer (he frequently writes for animation) working on projects for HBO, AMC, CNN, Comedy Central, VH1, Nickelodeon, etc. But, unlike the work for hire to someone else’s specifications, Kevin’s “Geek Outs” let him revel in his passion, develop his voice, and sharpen his observations.

Which brings me back to Cristy Karacas’s quote that opened this post: “Make the kind of work you want to be paid to make.”

A couple of weeks ago, via his Facebook status, Kevin announced: Emmy nominated Kevin Maher is set to host RANDOM FANDOM, a documentary TV series created  and developed by doublewide media. RANDOM FANDOM is a half-hour docu-series that explores the world of geekish revelry at fan conventions. Each week, Kevin will go to a new convention (lovingly called cons) and unveil parts of cons known only to the initiated. Every con has a hidden subculture — we’re uncovering all of them.

As Kevin’s story shows, it’s important to lay your own track, to grow opportunities in the direction you wish to grow.

Half the fun of making the work you’d like to be paid to make, is not knowing when and where it might pay off. It’s kind of magical––you sort of set it and forget it. Sort of like a George Foreman Grill of career plans. Examples? The film Cristy Karacas made with Stephen Warbick for MTV (“Bar Fight”) is what led to their invitation to pitch Super Jail eight years later at Adult Swim. I can throw a new experience of my own into the mix. A year ago I made the film “Grandpa Looked Like William Powell,” a short animated documentary. A month ago, a producer, whom I’d never worked with before, got in touch with me because he wanted to make a test pilot which happened to be a short animated documentary. When I showed him my film, he had proof that I had passion for the genre. I got the gig, something I was able to squeeze in during a two-week hiatus from my full-time job.

Cristy, Kevin, and I are all deep into our careers, but making your own opportunities is something that can also apply to students. About a year ago I was checking my email at NYU’s Tisch School of the Arts (where I teach undergrad), and there was a nearby information table where a student sat to hand out orientation materials. Two of the student’s friends happened by and began to chat with her. One asked her what she wanted to do after graduation.

“I want to be a paid blogger,” she replied.

This would-be "paid blogger" is on the complete opposite path of what Cristy Karacas is suggesting and what savvy people such as Kevin Maher do instinctually. Whether you’re a student or ten years in the industry, you have to build a foundation for your own unique success. And, since this takes time... Why wait?
Posted by David B. Levy at 9:57 AM

“Make the kind of work you want to be paid to make.”

This is the reason that I've been toiling on my animated short for two years now :)