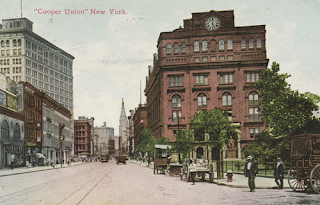 Vintage postcard image of New York City's Cooper Union.
Since it’s been a long time since I used this space to talk about my current projects, I decided to post about a new indie film I’m making, and the issues it brings up.

On Father’s Day this past June, I ended up recording a three and half hour interview with my dad all about his days in advertising. I can’t say what I planned to do with all that audio, but the next day I started editing it to a lean 90-minute narrative.

The focus of the interview was on my dad’s eleven-year run as a creative director at Grey, which spanned most of my childhood. But, when I realized that I should ask him some backstory questions, a story popped out on how he came to go to Cooper Union, something that would change his life, and later, mine. If you’ve read my books, you already know that I grew up on a steady diet of my dad’s career stories, but somehow until this moment, I had never heard him speak about his acceptance into this prestigious school.

During the edit, the Cooper Union story emerged as something that could be the bones of a short animated documentary film. I’ve been in love with the animated documentary genre since seeing Michael Sporn’s Champagne, and Paul Fierlinger’s films (including Still Life With Animated Dogs, and A Room Nearby). And since my most joyous filmmaking experience to date was with a doc short “Grandpa Looked Like William Powell,” I wanted to further explore this area.

But, since I don’t want to make the same film over and over again I thought I’d change up my process on this Cooper Union film in a handful of ways:

Lock the soundtrack first
When making “Grandpa” my frequent composer, Bob Charde, wrote and performed music to the actions and cues in my finished animation.

While I loved the resulting soundtrack for “Grandpa,” in the Cooper film I thought it could be fun to have Bob finalize his score before any storyboards, designs, or animation were created. I know that indies work all sorts of ways so this is nothing new or innovative, and, of course, in the golden age of Hollywood cartoons the soundtrack usually came before the animation. I wanted to try this simply because it might spark ideas in the storyboard and provide musical accents to hit in the animation.

I’ve grown increasingly fussy about the audio and sound in my films and I like to give a lot of direction before and during the process. For this short I gave Bob a half dozen clips of avant-garde music I liked and instructions on where similar music might fit into the piece. Working over a month-long period, Bob experimented with different sounds and composed a really terrific score. He ended up going above and beyond what I imagined, and really brought out the various moods in this story.

Storyboards
Two of my last three shorts did not have anything resembling a storyboard stage, and while that was all well and good, this time I felt the need for some structure. But, since the film was so personal already I wanted to take one step away and bring in some help to create the storyboards. I’ve been a fan and friend of animation artist and teacher Willy Hartland for years and lately we’ve worked together on several freelance projects. I knew he would be the perfect fit for this film.

I gave Willy the soundtrack and a script with a shot-by-shot breakdown of what I wanted. He naturally asked for character designs so he could do his job, but after experimenting with many different design styles for two months, I still hadn't arrived at the right look. But, right after I got off the phone with Willy I turned on my cintiq and, at last, the appropriate designs finally emerged. I was able to email him a complete set of designs within an hour. That’s one of the reasons I love collaboration on an indie film. When you bring another party into your process it challenges you, forces you to get your act together and stop floundering.

Find the Balance
It has been a little harder than I thought, making a film after “Grandpa,” because it can be intimidating to make your next work after you’ve had a success. This is new territory for me, although I think it’s something every filmmaker or artist deals with at one point or another. On one hand you want to repeat what worked for you, but on the other hand you want to try something new.

One thing I tried and rejected (with the good advice of my co-producer, Debbie Staab) was the idea to use another device (like the autograph book in “Grandpa”) to frame the Cooper film. In the “Grandpa” film the video book element was an organic part of the storytelling. The book was a symbol of both the connection and lack thereof between generations and the animation lived in its pages. I spent a few weeks trying something in that vein for the new short, and it came across as very forced and unmotivated to the story I was telling.

With this new film I could fall on my face, but I like to remind myself that was just as likely last time. The worst that will happen is that it won’t get into many festivals. The important thing is that I believe this is a film worth making. There’s something powerful and universal in the story of a poor kid’s desire to better him self by seizing his one chance for a college education. As school starts up this week, don’t we wish all our students were just as passionate about their educations?
Posted by David B. Levy at 2:45 PM