I’ve been meaning to do a round up of blogs I like for some time, so now is as good a time as any. Animation artist blogs or animation studio blogs come in many varieties. Some are strictly online portfolios, while others offer behind-the-scenes looks at the state of the art form or uncover its history. Here’s a round up of blogs (in no particular order) that I check out everyday, and the reasons why. 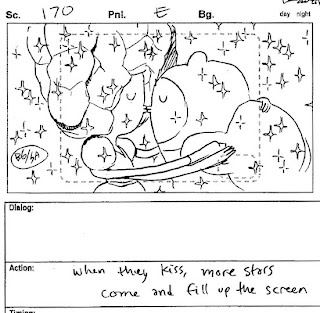 The Frederator blog, a collection of posts by Fred Seibert, Eric Homan, and their associates, celebrates the art form and its artists. Besides giving countless newcomers their first public nod, this blog also takes readers behind the scenes showing how hit series such as "Adventure Time" (pictured above) and "Fan Boy & Chum Chum" are made. I can’t think of a more transparent production than "Adventure Time," for instance, in that it appears that every model sheet and background painting made for the series has been posted for viewing. Since the quirky show is the most game-changing animated series since "SpongeBob," this is nothing to sneeze at. Add to this the entrepreneurial musings of Fred Seibert, forever encouraging readers to re-invent themselves and their industry, and to do it all with passion, joy, and enthusiasm.

Michael Sporn's Splog
When I worked for Michael Sporn, for an all-too brief two years, I made sure that (besides Michael) I was the first person in the studio each morning. That meant a leisurely conversation with Michael at the back table over tea. It was my chance to ask him how he made his groundbreaking films and he’d recount each experiment with pleasure, aptly demonstrating his love of animation and filmmaking. One morning he pulled out some issues of his old studio newsletter called Sporn-O-Graphics, which made for a great record of his early 1990s output as well as time capsule of the overall era. Other mornings Michael would suddenly get up, pry open a box on a nearby shelf and pull out original layouts from Raggedy Ann and Andy, or drawings by John Hubley, among others. These morning chats are now available to everyone through Michael’s daily splog posts. If you like your animation discussion from a responsible and reliable source who was there, worked with many of the greats, and is leaving his own mark on the art/industry, then this is the blog for you.

Mark Mayerson
The only time I disagree with Mark is on the subject of pitching and development, but I don’t let that stop me from enjoying his intelligent observations on the business, industry, and art of animation at Mayerson on Animation. From copyright issues, to studies and mosaics of classic animation, to issues faced by students and recent graduates, Mark’s blog covers it all. Best of all, he’s rational, balanced, and level-headed, something in short supply on the Internet. 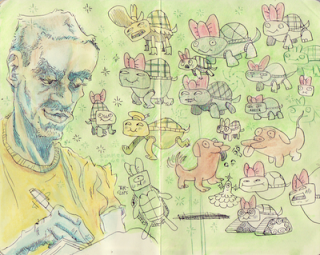 As a teacher at NYU’s Tisch School of the Arts, I had the pleasure to meet the latest wunderkind to emerge from the program, the multi-talented Stephen P. Neary. After wowing the festival world with his quirky and delightful student films such as “Shark Suit,” and “Chicken Cowboy,” Stephen graduated and was immediately snatched up to work in the story department of Blue Sky. For so many, scoring a dream gig like that would mean putting any personal projects on hold, but not for Mr. Neary. He’s been busying himself making further short films such as “Let’s Make Out,” and the upcoming, “Dr. Breakfast,” as well as creating book and feature proposals, and otherwise scribbling lovely observations into his sketch books (pictured above). Oh, I forgot to mention, Stephen is a hell of a nice guy, making it all the more fun to go along on his journey and cheer him on.

Scribble Junkies
I come to Scribble Junkies in part to read Bill Plympton’s unusual reviews of the many films he watches (its especially fun to read him objectively criticize the work of friends––even ones as powerful as John Lasseter), in part to be a fly on the wall as Bill reports on his never ending animation world tour, and to read Pat Smith’s surfer/rock-star take on being an artist/animator. Bill and Pat are two of the most active indies in the world and for that reason alone they make an exciting combination. They share an infectious “can do” spirit that makes you want to finish a film and then promote your work with gusto.

Ace & Son Moving Picture Co.
No other blog best captures the ins-and-outs of running a successful small animation studio than Ace & Son owner/operator’s Richard O’Connor’s blog. Go deep into his archive at his old address to find invaluable posts on budgeting, pipeline, and all aspects of doing business. His discussions on the creative side are no less insightful. Richard and I began our careers in animation in NYC during the same year but have charted very different paths. Even though it is not my goal to operate a traditional studio as Richard does, I admire his ability to hold a bustling studio together, to get work, and how he shares his knowledge and experiences to help others navigate this difficult business. 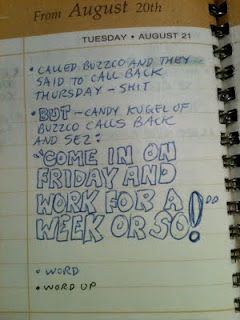 The overgrown kid known as Mr. Warburton has achieved a lot in his 20-year (and counting) career (note the page above from his first job hunt journal heralding his hire at Buzzco). Once the poster child of NY animation success (going from employment at studios from Buzzco to J.J. Sedelmaier to creating and producing his own long-running series for Cartoon Network), he has since packed up to reboot his career in L.A., currently supervising retakes for the Disney TV series “Fish Hooks.” Despite his level of achievement, Mr. Warburton’s blog somehow manages to feel like the fresh enthusiastic observations of someone just starting out. This is a man appreciating life working in a field he loves. 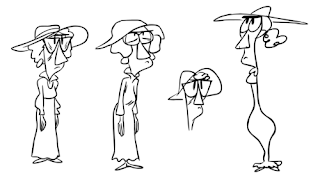 Like an indie version of the Frederator blog, brothers Tim and Mike Rauch have been extremely transparent in sharing their production process (pictured above, Tim's design studies for Miss Devine), collaborations, thoughts, and research behind their acclaimed StoryCorps animated films. These guys did things the hard way, creating work on their terms, and giving hope to today’s generation of animation talent that there’s another option besides lining up for a more conventional job or internship in the field.

The blog I like most of these is Mark Mayerson's. I do like his comments on pitching, and I trust the words since he's successfully done a full series of a cgi show, MONSTER BY MISTAKE. But actually, I only listen to my own advice on pitching. I do go to Mark for a clearheaded voice on higher business matters in the Industry. He also knows film (live action & animated) inside out, and he shares the knowledge. Finally, he has the taste of the gods, but unlike me he often holds back when he has something negative to say about other people's work. I kinda like that attribute, even though I don't practice it often enough.

Thanks for the mention, by the way. And I'm the first one here on Monday mornings to see what you've had to write.

A great analysis of why you like Mark's blog here. It's why I visit too!

hey thanks, david! here i thought only my mom read my blog.

that's a lie, of course. my mom can barely use a computer, let alone look at blogs.

The two of you are balmy.