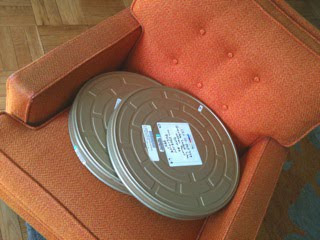 I’ve been surprised and delighted at the positive reception of my short Grandpa Looked Like William Powell. The film is about halfway through its festival run and still receiving invites from festivals around the country. It was gratifying to be accepted into competition at some major festivals, but one of the biggest kicks I got was from reading notes on the film made by the jury of the Animazing Spotlight festival, where they voted my film a 2011 Quarterly winner. I know that getting such feedback can’t always be a pleasant (or even useful) experience, but the messages on my film turned out to be interesting and provocative. I'm not a famous or highly regarded filmmaker so it's a rare treat to read any words on a short film of mine. And, since shorts don't get half the attention, reviews, or respect that feature films do, I'll enjoy this while it lasts.

All this encouragement inspired me to go to the trouble (which included making two 35 mm prints of the film, as pictured above) to qualify "Grandpa" for the Academy Awards. Maybe I'll have a shot if some of the Academy voters agree with the Animazing Spotlight jury. Whatever happens, it'll be nice to be on the ballot.

I like it very much. Good idea to make the autograph book the key element of the image as well as the story. The animation is very well done, I love the sketched-like style of the characters. The music matches the voice over and the image perfectly. An excellent homage!
- Silvina Cornillon

This is a reminiscence about a grandfather after he has passed. But the animation, hand-drawn and digitally superimposed over an old diary is warm and appealing. I especially liked the way the line drawings bring the pages to life for a few seconds. The character drawings, though deliberately quick and sketchy, surprisingly capture the personalities, especially of grandpa, and the other family members. And yet the central figure remains an enigma. This is a gentle, understated story about a man who was loved and about whom not much is actually known. Well done.
- Jack Bosson

I loved his film--it took me back to similar techniques of UPA ("The Unicorn in the Garden) and Caroline Leaf's film about her life in a N.Y. suburb as a child. This is totally engaging, great animation and design, beautifully written and very personally involving.
- Bill Matthews

This snuck up on me and completely charmed me. I finally thought, ''This reminds me of the best parts of George Griffin's films and a little bit of our own personal films.'' Great work!
- Frank Mouris

Really good. Worked on pretty much every level for me. I felt like I got to know the central character, I felt that the filmmaker had made pretty good use of the various properties of animation to tell the story, I felt that the artwork matched the narrative and I really liked the story. I showed this to several people and a couple of them wondered (and I had a similar fleeting thought) that perhaps the film insinuated that the Grandpa might not have been wholly trustworthy when it came to dealing with kids. Not sure if this insinuation is intentional or whether the people I hang out have overly suspicious minds
- Malcolm Turner

This is an engaging and quietly challenging piece, in that such biographical pieces normally try to facilitate a kind of intimacy and poignant revelation. I liked the way this told the story through the autograph book but ultimately led to a lack of connection or knowledge. That which is known is nicely, one might say, warmly illustrated, but the presiding feeling is one of distance from the central character, a man suggested rather than known; a man whose existence takes on an almost Beckett-style absurdity by virtue of his acceptance that ‘that’s it’. We assume that all lives leave evidence of affect and purpose; such a memoir might suggest that the common outcome is the very opposite.
- Paul Wells

Genuine. Nice little film talking about someone seemingly close to your heart, but not quite close.
- Sharon Wu

The voice over reminiscing with the autograph book was very nicely handled. The animation was simple but very well done. The movement of the characters over the bowing of the page seam was superb. Great story arc. First class film.
- Larry Loc 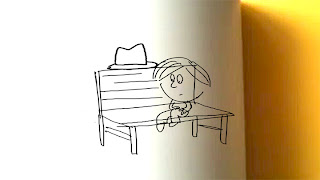 Glad to hear it continues to get such a good reception from people! Congrats.

Thanks, Mike! And you should know, the films you Tim have been making are a huge inspiration to me.

Good Luck David! We're all rooting for you.

Thanks so much, Dennis! That's very kind of you.

Hi David:
Congratulations! Reading the judge's comments and reviews really has me curious. Is there any chance of you posting your Grandpa short (or scenes from it) somewhere? ... for those of us who won't be able to see it at a festival?

Thanks for your interest!
Here's a link to a short bit from the film (very low res, unfortunately) that I cobbled together last Thanksgiving.