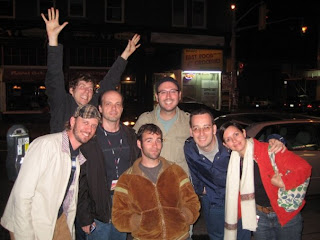 A snap from The Ottawa Animation Festival in 2008, (left to right and front to back) Justin Simonich, Andy Kennedy, Glenn Ehlers, Andy Sacks, David B. Levy, Chris Boyce, Linda Beck.

I thought it might be fun to bookend my previous post with my first letter as ASIFA-East president dating from September 2000. This doubles as a review of my first ever experience attending The Ottawa International Animation Festival. Since I had just been promoted to an animation director position at Blue's Clues, Nickelodeon generously paid for my hotel expenses, but with the caveat that I act as representative of Nick's brand new digital animation studio. This mostly meant I had to hand out toys and postcards. Not a bad deal, right?

Attending my first major festival was an eye-opener. Where else can you see five days of animated programming and mingle with wonderful artists from all around the world? I was forever transformed. I wanted to see my films on their screens one day. I still haven't achieved that goal but, they hosted a signing for my first book and a panel for my second. I was invited to return to the festival this year to do a panel based around my Directing Animation book but, had to turn it down due to a conflicting opportunity.

If you haven't been to the festival, book your trip now. You won't regret it.

A Letter From The President
David B. Levy

Greetings from the North! By North, I mean the Ottawa International Airport. That's where I'm presently sitting, awaiting my flight back to the Colonies. If I'm still here when you get this....won't someone be so kind as to send me a sandwich and two hard boiled eggs? As you may have guessed, I am in Canada because I attended the Ottawa International Animation Festival. It was an interesting and informative trip. I learned that it's possible to wear shorts during the Fall in Canada (courtesy of Festival Director, Chris Robinson). I also learned that no matter how hard one tries it's impossible to spend down all your loose Canadian change before you get back across the boarder. And I learned the secret to surviving a week of daily animation screenings....the mid day nap.

Between lessons, I managed to squeeze in about three screenings and events a day. There were many noteworthy films. Marv Newland brought us, "Fuv," the story of a man who is not sure who should inherit the earth (and no, the answer is not "the meek"). Barry J.C. Purves's "Gilbert and Sulivan- The Very Models" actually won the award for best models. Veteran animator Paul Driessen was a crowd favorite with two entries, "The Boy Who Saw the Iceberg" and "3 Misses." As someone who paid $375.00 for a one inch high Blue Meanie Driessen drawing at last years Asifa-East auction, I couldn't be more pleased.

It was a proud festival to be an ASIFA-East member. Our own Paul Fierlinger was called on stage so many times that he wore a hole in the carpet. Recognizing this, Ottawa awarded him the "most called on stage award" (no joke). Fierlinger's idiosyncratic body of work was also featured in a special screening which included bits of his newest film, "Still Life With Animated Dogs", a personal account of his life with his canines. Take it from me, this one is not for the dogs.

ASIFA-East native son Bill Plympton was also honored with a special screening in which he indulged the audience with a work in progress peak at his new feature "Mutant Aliens." Also screened were eight of his new web shorties, animated in Flash, for Atom Films. Also featured in this year's fest was several films by Asifa-East member in good standing, J.J. Sedelmaier. His "Captain Linger" should be used as a lesson to all would be super heroes, that one should always leave on a high note (or at least on a £5 note). Also screened were "The Ambiguously Gay Duo #7 Letters" and "Jewel's Poetry", directed by our own Sean Lattrell (which won the Mike Gribble award for Humor). Last but, not least....our friend Yvonne Anderson's work was featured in a special retrospective.

One of the highlights of the festival for me occurred at a retrospective of legendary animator Gene Deitch's Rembrandt Films period. One "Nudnik" film was screened backwards and upside down. This was followed by Deitch films for Weston Woods that apparently arrived for screening without optical soundtracks. This snafu quickly turned into a blessing as Deitch (sitting in the audience) burst into action by giving an off the cuff commentary on the films as they played. Another high point of the festival was the George Pal retrospective. The light attendance for this early morning screening had Jerry Beck throwing up his hands as he blasted the missing people for not knowing what they were missing. The missing people could not be reached for commentary at press time. The all too brief program featured Pal classics like "Mr. Strauss Takes a Walk," "Tubby the Tuba," and the poignant "Tulips Shall Grow." Won't someone please put the complete surviving Puppetoons on DVD? 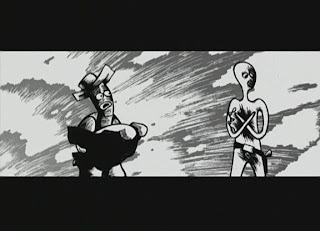 A still from "Ring of Fire" by Andreas Hykade

The most bizarre moment of the festival happened after "Ring of Fire" (Andreas Hykade) won the Grand Prize for independent film. Estonian jury member, Priit Parn, approached the podium and announced his strong disagreement into the microphone. He then dutifully pointed out that the best film was in fact "Flying Nansen" (Igor Kovalyov). A stunned audience was quickly pacified with the screening of the winning films.


For some the most interesting thing about Ottawa was the weather. There was sun, clouds, rain, and warm and cold fronts. Happily the weather was just right for the animator's picnic. Apparently, the bees agreed...because there was one bee for each animator in attendance. One unlucky Canadian touched a plastic cup to his mouth without noticing a bee had perched on the rim. Needless to say....the man had a "swell" time at the picnic.

Now for more local news.... As the new president of Asifa-East I am proud to have the opportunity to work with such a diverse, experienced and capable board of directors. We also share the privilege of having Barbara Kearney as our new Vice President. In addition to this position, Babara will continue to handle programming duties.

Together, we have an exciting year in store for us! The newsletter is back (on a semi-monthly basis), the website is transitioning into different hands and the 30-year festival book is almost complete. Also, we have some new blood taking over important positions. Joining us as the new Membership Secretary is David Billings. Dale Clowdis is helping out as acting Newsletter Co-Editor. Tarik Cherkaoui is taking over as webmaster of our aforementioned website.

Finally, the Asifa-East annual Open Screening when off without a hitch on September 27! It turned into an old fashioned "sit in" as capacity crowds filled every inch of space. It was so crowded that someone drank my water. Lot's of funny, touching, bizarre and sex-crazed films rounded out the evening. Thank you to all the animators that participated! We'll see you next screening...(details on the cover)!
Posted by David B. Levy at 6:04 AM