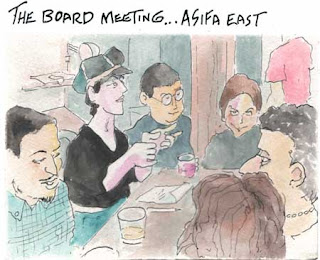 It’s surprising to look back and realize that I’ve spent most of my animation career as president of ASIFA-East, and a large percentage of my adult life committed to ASIFA-East in some capacity. Now, after 11 years as el presidente, I’m stepping down from this office and I’m excited to see what the future holds for myself and for the organization that changed my life.

I joined the board in the fall of 1995, at the urging of one of my heroes, Howard Beckerman. The first meeting I attended turned out to be historic because everybody showed up naked. Okay, that’s not true, I was just trying to spice things up. It was historic because at the start of the meeting Linda Simensky announced she had accepted a job in development at Cartoon Network’s Atlanta headquarters so she’d have to give up the presidency. This was true for about five seconds until long-time board member (and gracious meeting host) Candy Kugel suggested the possibility that Linda could still be president from Georgia. Nobody wanted to see Linda go, so for the next four years, the office moved south to Dixie.

The ASIFA-East board members amazed me then and still do today. They do so much for so many, and never for pay. What brings them back month after month, year after year? All of these people with jobs, personal lives and commitments, feel it’s important to lend their time, talents, and energies to this cause, for this community. The group is a bit like Switzerland, a neutral territory—outside of the boarders of animation studios—where people can gather, mingle, and celebrate their shared love of animation.

Most people who attend board meetings are eventually assigned some task. My first responsibility was to assist then-membership secretary Jim Petropoulos. He taught me all the ins-and-outs of that role and a year or so later, when Jim stepped down, I became membership secretary. My co-worker at Blue’s Clues Chris Gelles became assistant membership secretary. To welcome us to our new posts, Linda and Jim treated Chris and me to a Japanese meal at a fine restaurant. The three of them devoured their fish with gusto (gusto was a popular cocktail of the time). I ordered the chicken, which came with a side of food poisoning (such was the auspicious start of my ASIFA-East career). Being membership secretary was a wonderful experience. It forced me to come out of my shell and engage with hundreds of animation people. Considering that this was pre-Facebook, that was no small feat.

After a few years of being an off-site president and doing a wonderful job in the position for 10 years, Linda Simensky decided it was time for a change. It was quite a shock when she asked me to be the next president. At first, I was reluctant, knowing what a commitment and responsibility it would be, but Linda is a great salesperson. I think I accepted the next day. When I became president it was all fireworks and barbecues, but I’ve since been told that was because it was the Fourth of July. My early days in the role were a lot like visiting a foreign country: you struggle to learn the language, try to pack the right clothes, and have trouble going to the bathroom.

My time as president turned out to be a period of great instability in the economy. New York animation was also affected by shifting media trends, a number of unstable studios, aborted productions, and a few large studio closures. But now may be the start of a new era of growth. New York is still the home of many celebrated indie filmmakers, a few mid-size to large studios producing series work, lots of scrappy and resourceful artist-run studios, a thriving CGI/SFX community, several world-class animation schools, and one of the best animation talent pools around. Besides ASIFA-East, the community is further served by such groups as WICM and WIA, and new institutions like Animation Block Party, Too Art for TV, and Midsummer Night Toons, each contributing much to the fabric of New York-area animation.

In 2000, when I stepped into Linda Simensky's impressive shoes (I think they were Converse), I was nervous and felt a bit unqualified that first year. But the position forced me to sharpen my game, interact with a lot of people, and present myself as a public figure and community leader. I’m not sure I ever fully figured out that last part of the job, but with such an enthusiastic board of directors, and a wonderful group of supportive members, we achieved a lot! Membership is up, our books are in the black, the monthly screenings are well attended, submissions to our festival have risen by nearly 50%, which may have to with the fact that we have the most vital Web site (and social outreach) of any ASIFA chapter in the world.

Whatever we accomplished on the board of directors is your legacy too. To all the ASIFA-East members and all of the executive board members of the past eleven years, I’m forever in your debt for the amazing opportunity to be your president. I’m still astounded that anyone had faith that I could do this job! Thanks for believing in me. You changed my life and career in so many ways. I can’t thank you all enough!

Now, all that’s left to do is throw our support behind the next president…

On behalf of the entire board of directors, I’m excited to announce that the awesome, affable, and animated Linda Beck will be your next president. She’s no stranger to the ASIFA-East board or the community, having served on the former as membership secretary for over five years. She also has a prominent place in the industry, currently working on the hit Nick Jr. series Team Umizoomi as a production manager/line producer. Linda is also a terrific artist and illustrator, as well as friend to all animals, vegetables, and minerals. Perhaps most importantly, she’s a fierce and passionate fighter for all animation folks.

To top it off, Linda has strong ties to the CG/SFX community, having worked as producer for two years at Mechanism Digital. A couple of years ago she used her expertise in this area to put together a killer panel featuring five of the top CGI/SFX studios in town. As the worlds of character-based animation and CG/SFX and composite work blend together more and more, Linda Beck is just the person to keep ASIFA-East relevant in this changing media landscape.

Linda’s term as president begins on September 1st, and I know you’ll join me and the executive board in giving her a warm enthusiastic welcome. We’ll announce further changes to the board of directors this fall as well as planned improvements to the festival.

Thanks for all that you've done for ASIFA-East!! It's one reason I'm in NYC now :)

And I think Linda is a fantastic choice and will do a wonderful job!

Time must fly when you're having fun, eh Dave? You've been a great president whose done a lot of hard work over the last eleven years.

And all the best wishes in the world to Linda, I'm sure we have a lot of fun things to look forward to in the near future :)

Will you continue with Aimondays or will that be another of Linda's duties?

Thanks all for the kind words and the well wishes for Linda!

Michael, good question on Animondays. I've really enjoyed blogging, so I plan to continue onwards. I'm sure Linda Beck will find her own spin on how she wants to communicate to members. I'm looking forward to seeing how she makes the presidency her own.

Thank you for all your efforts on our behalf, Dave. Have fun with all that extra time!

Dave, you're the only president of anything Ive ever known personally.
Meeting you and all the asifa folks changed the course of my career and life. I met my mentor and a good deal of my friends at asifa meetings. Thanks for everything.
You will be missed, but long live the new president!
Linda is going to be AWESOME!!!

david! thank you for all the hard work you've put into asifa east! surely you're a tough act to follow.