The Legacy of "Blue's Clues" 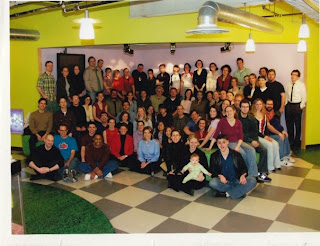 The "Blue's Clues" crew circa seasons 5, the next to last season.

In October 2004 I wrote this essay on The Legacy of "Blue's Clues" for the ASIFA-East newsletter. The series had recently ended after being in continuous production since 1996. I joined the series in early 1997 when the show was part way through its first season. With hindsight we know that the 1990s was one of the golden ages in NY animation, based on the amount of high paying and high visibility work available. "Blue's Clues" ushered in the last wave of that decade of activity, giving age old production techniques a fresh spin with a digital pipeline. It was now possible to animate an entire series in the U.S. again, something that hadn't been true since the 1970s.

Switching gears from topics in previous newsletters, I’d like to spotlight a local show that recently wrapped up production. I’m talking about a show that was in straight production for nearly a full decade! All of it animated, storyboarded, designed, written, researched and produced in house. The Great Grandmother to all the digital shows today (even pre-dating “South Park”). If you haven’t guessed it, I’m referring to that ground breaking pre-school game show, “Blue’s Clues."

Other productions have followed in “Blue’s Clues” wake, often staffed by those trained at “Blue’s Clues” and its After Effects based model of production. A whole generation of graduates got their start on Blue’s or the shows it inspired. The money
generated by the billion dollar little blue puppy franchise helped spring the lovely “Little Bill,” the animation block at Spike TV, and spurred on green lights throughout the industry.

However, the legacy of “Blue’s Clues” means more than just the money and jobs it generated. It was a positive thing to put out in the world, and did an educational service to its impressionable viewers (children ages 2-6 and some slightly askew college kids). It helped kids feel good about themselves and made their parents breathe a sigh of relief knowing it was out there. It solved the energy crisis, ended the war in Iraq and...well, OK, it didn’t do all that.

Like all shows, the production of “Blue’s Clues” evolved and changed as it went on. Those who left after the semi-rocky pioneering first or second seasons would be impressed to see how smoothly the production ran in its final years. At the same time, the standards for excellence in writing, design, and animation soared to ever increasing heights as the years passed by.

The production also broke ground the way in it reacted to several animators who developed carpal tunnel syndrome at the beginning of season two. "Blue’s" crew and producers rallied MTV Networks to improve the situation. Because of these actions, hundreds of animation artists of "Blue’s," “Little Bill”, and the Spike TV shows were given specially designed ergonomic desks and work stations. Injuries dropped to near zero (that guy who walked around for two years with crutches was faking it).

When animation artists gather at the local watering hole, what do they complain about win regards to their jobs? Often people are frustrated over their lack of a voice, feeling under-appreciated, and working for inadequate compensation. “Blue’s Clues” showed that you could make a number one show, produce it digitally in house on a TV schedule, push the creative envelope every season, and hold on to your crew for years by showing them the proper appreciation.

Every production or studio has its own way of organizing the work and the workers. Each animation artist in NY is the keeper of a vast supply of production knowledge in addition to their tricks of the craft. As much as we help shape the day-to-day nature of our jobs, we are, in turn, shaped by the production methods and attitudes of those around us. “Blue’s Clues” was a supportive, collaborative, and creative place to spend the last 10 years and it will be missed by many. The impact of the show in the local industry (and beyond) will be felt for years to come. For evidence, you merely have to follow the clues.
Posted by David B. Levy at 12:13 PM