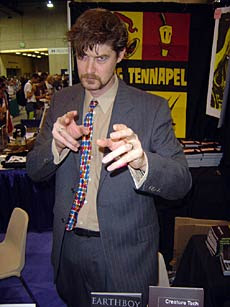 Continuing with another interview post from my archives, this time I'm happy to share the unpublished portions of an interview I conducted with creator Doug TenNapel (pictured above) in 2008. The subject is on pitching and development for the animated series, something Doug knows a lot about. He's best known for creating Earthworm Jim, a character that spawned a famous video game, cartoon series, and toy line. He followed up that success with a short-lived series on Nickelodeon called Catscratch, and is currently working on a Cartoon Network original series called Phibian Mike.

Doug seems to have that particular blend of talent, tenacity, and salesmanship that you need to break through to success in such a rarified capacity within this fickle industry. Just what was Doug's creative approach to churning out pitch after successful pitch? I was interested to find out...

1-Describe how much you typically prepare for a first pitch meeting
(including what amount of art and written material)?

All of the time goes into creating the thing, so coming up with the pitch materials is the shortest part of process for me. Many of the characters I pitch have been on my work desk for years so when I finally decide to pitch them I just bang out a page or two of written material and maybe do three to five pages of art.

Usually I'll type up the pitch in a few days and do little sketches and doodles directly on the printed page. It's not very professional but it forces the executives to consider the visual as they read the material. Shows end up on a screen and there are no words to read in the final form so it seems odd to have the pitch written in some dry format that is usually only written because the language of Hollywood is the word on the page. 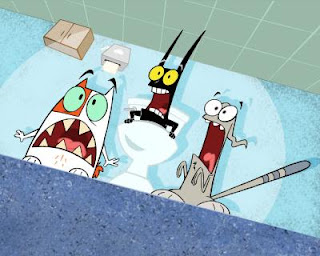 2-Have you ever created or pitched a project with one or more partners? If so, what were the pros and cons?

I've only partnered up with one guy in my life. I did Project GeeKer with Doug Langdale and it was a great experience. It just wasn't for me. I still run into Doug from time to time and I think we worked out so well on GeeKer because it was relatively early in our careers and it was the right project at the right time. I've made offers to certain partners where I was interested in writing with them or doing a show but those shows never took off.


3-At what point does a creator require legal representation (a lawyer)? And what's the best way to find a good lawyer specializing in animated entertainment?

The best time to get a lawyer is when a studio shows interest in something you've made. The legal side of television is pretty boiler plate on most shows so there aren't any big surprises. If you go to a lawyer that specializes in animation you've already limited the pool to about 12 people...all of whom will have done more deals than you've had warm meals.

4- How much effort have put into copyrighting your creations prior to pitching? If so, what steps did you take?

I do little or none. I have so many hundreds of characters that I couldn't copyright them all. Once the pitch starts getting heat at the studio, I might secure the domain name (if available) but it's never a big deal. Just before the contracts are about to be signed I'll usually properly copyright everything since most contracts want to make sure you indeed own the property you're pitching.

5-How would you describe your pitching style? Can you describe how you pitch in a meeting, step by step? (NOTE: part of this answer already appears in my book Animation Development.)

All pitch meetings start with the studio offering me water. I think it's because they assume we show creators are probably homeless and we can't afford a 1 dollar bottle of water. They offer water, but I ask for coffee. I'm usually seated at a conference room table or sit in the office of the executive featuring witty furniture and a few hard bound art books they
didn't read but make them look like they really like some obscure graffiti artist from Iceland. We chat about the weather, about my four kids, about my height (I'm 6'8"), about my graphic novels, and sooner or later we move to the material I set on the coffee table.

I keep the pitch SHORT because length doesn't accomplish anything (trust me on this, I'm 6' 8"). I'll give the title "KID BLAST!", a description of type of show,"It's a puppet animated action comedy for boys six to eleven." then I'll give a brief description of the show's content, "It's about a kid and his gingerbread dog who just want to 'have a blast' everywhere they go. You see, the kid and dog like to have fun but the dog is made of cookie so they can't get him wet and bad guys want to eat him. By the end of each show the dog is eaten or melted and Kid Blast just bakes up another batch of his favorite mutt."

I show them one image of the kid and his dog, present them with a paragraph description of the show, a paragraph description of the main characters and three to five sample episode ideas and our meeting can be done. I'm already checking my watch and offering the executive an out in case the material just isn't for them. They usually have a few questions to feel out the material. It really isn't that hard of a decision at this point, either they get it and see dollar signs or see it as something that will kill their
career if they make it. Sometimes we go back to talking about movies or friends and families, or how interesting my artwork is in the pitch material, but essentially, a show has been pitched. 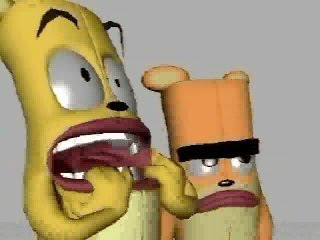 A low res work-in-progress still from one of TenNapel's Solomon Fix, a short he made for Frederator's Random Cartoon program, which gave the creator a chance to play in 3D animation.

6-How useful have pitching extras (such as a bit of finished animation, voice or song track) been to you in a typical pitch meeting?

If I could afford to animate them properly I wouldn't need a studio to pay me to do it in the first place!

I think executives like to participate a little more in the execution of the show. If you cast one bad voice or have one bad joke at the wrong time, you've just put a really bad thought in one of the world's less creative minds. You're not going to be able to get them to imagine the show any other way than what you've shown, and that's usually a bad thing. If I was doing a Pee Wee's Playhouse, I don't see how an executive could get the pitch without seeing something visual first...but with most pitches, the executive will imagine something better than you could produce. Let the execution be vague.


7-Do you have any recommendations for how to best write world/set-up, character, and plot descriptions for a series pitch bible?

I spend most of the time thinking out why these characters need to be together, what they represent, what a young audience will find exciting and accessible about them that I don't think a whole lot else is needed.

8- Any advice for creating show art for use in a series pitch bible? For, example, how much, and what is essential?

The lead characters, a bad guy and maybe a background is all that's needed. Frankly, I would pick up or drop a show based on the main characters. If the core characters are good you've got a show. I don't care how appealing the main character's uncle's dog is.


9- How did you find your creative team to produce your pilots?

I call in people I know. Usually the core team are going to be my go-to guys who solve all of my problems for me over the last twelve years. I pick up a few superstars along the way so I know who I want for most of the positions on a show. I like to have friends on board, but I like to work with talented jerks too. And we're all kept alive by young, fresh killer talent just coming out of college. There are always these mavericks who show up drawing like an old-school Disney guy though they've just turned twenty one.


10-Any advice for new comers to pitching on how to best manage & cope with the emotional rollercoaster inherent in the pitching process?

You have to learn to enjoy pitching. You will pitch lots of shows before one is picked up for a pilot. You might even make a few pilots before one goes to series. I always feel better about a pitch if I know I've done my best. An executive might not like me show but I'd feel really bad if I wasted their time by not bringing them my best material for what I think should work on their network. After a year or so of pitching, the nerves started going away. Now I can pitch to anyone and I don't feel stress. I've pitched to everyone from Spielberg to Sam Raimi's company to Disney Channel. It's just fun now to see if I can get an executive hooked on my characters! You know what's cool? Most executives WANT to be hooked on some exciting story!
Posted by David B. Levy at 7:48 AM

Gold! Absolute Gold. I really love these interviews. It's almost like having a one on one with the experts but concise and to the point. Thanks again David :)

Thanks, Dennis. So glad you enjoyed the interview. These posts have been a fun change of pace for me.

great advice from and awesome dude. love his work. thanks for posting!

this is a really excellent interview dave. thanks!

Lots of great advice in this interview! I loved reading it, thanks again for sharing these with us.

Thanks so much, all! Very happy you got some useful advice out of this...