The Festival of Drawn Animation 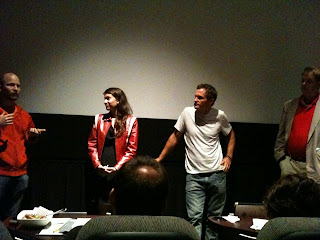 (From left to right, animators Fran Krause, Colleen Cox, Pat Smith, and Bill Plympton during the closing Q and A at The Scribble Junkies Festival of Drawn Animation. Terrible iphone photography by me.)

Last week I had the pleasure of attending the first Scribble Junkies Festival of Drawn Animation, the brain-child of animators Bill Plympton and Pat Smith. The two high profile artists already share a blog, a passion for hand drawn traditional animation, and now have collaborated to curate and present this new festival. Their choice of venue, the new Nitehawk Cinema in Williamsburg, Brooklyn, helped set the tone of a relaxed and celebratory atmosphere. Maybe that’s because there were drinks to be had in the Cinema’s bar before and after the show? I, for one, very much appreciated the Magner’s Cider on tap. *burp*

As recently as fifteen years ago 2D drawn animation was still THE main technique of animation around the world, as it had been for nearly a century. If someone had called an event a “drawn” animation festival back then, it would have seemed redundant. Today such a distinction makes total sense. But, the “drawn” credo is more than just a snappy title or a way to position itself apart from what the big CGI studios are doing in features. As I watched the selections of the evening, I began to realize the artists behind these films wanted us to see their individual drawings. Many of these films are about drawing, both technically, and in the psychological sense by what happens when the artist loses his/her self in the act of drawing. 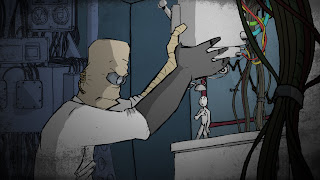 I appreciate this new festival’s focus, especially in how it forced me to look at a few films in a new way. For example, Pat Smith's "Masks" benefitted from the viewer's requirement to experience each film in the context of drawing being the most important element. Drawing and animating are Pat's strengths (check out his wonderful commercials posted here), so even though "Masks" began as an audio track created by composer Karl von Kries, it's the visuals that dominate the experience. Upon seeing this film some months ago, animation artist Adrian Urquidez remarked, "You can tell this guy loves to draw." In short, a perfect candidate for this screening.

David Chai is one of today’s most decorated and prolific humorous animated filmmakers, sort of like a disciple of Bill Plympton, but his “Enrique Wrecks the World,” (which is a crowd pleaser on the festival circuit) seemed a little out of place here. Maybe I wouldn't have felt this way if the short was programmed later in the show, but as the opener, I expected something a little more visually compelling––something to showcase all that drawn animation can be.

Pat Smith introduced “The Music Scene” by Anthony Schepperd as being a former student of his, making the claim that the student was better than the teacher. The film is was wonderfully inventive and imaginative.

Rebecca Sugar, one of the most amazing talents to come out of SVA in recent years (and there’s been a lot of competition), was represented with “Johnny Noodleneck,” which, like her thesis film “Singles,” featured terrific drawing and quirky, brilliant, and idiosyncratic character posing. It was a treat to see another work by the gifted artist, even though it appeared to be a less polished earlier work when compared to her more mature thesis film. 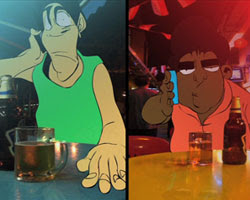 A real highlight for filmmaking in the show was “Wrong Number Singapore,” which Colleen Cox animated to a popular viral audio recording circulating around Singapore. I loved the designs, acting, animation, and frenetic crackle of the short, which depicts a phone call gone terrible wrong. Keeping the film language to a minimum was a great move because it let Colleen have a field day animating these raving characters in a way so the staging didn’t get in the way. 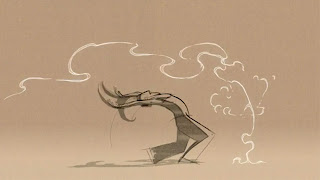 Thought of You by Ryan Woodword

“Thought of You” by Ryan Woodword went toe to toe with Bill Plympton’s excerpt of “Cheatin” as the most beautiful animation in the festival.

I was very happy to finally get to see Don Hertzfeldt’s “Wisdom Teeth,” after having missed it at several other festivals. It was a curious one-joke experiment, and judging from the laughs in the audience, a successful one. It reminded me of the filmmaker’s free spirited earlier work before he attempted the more structurally sophisticated “I’m So Proud of You,” and “Everything Will be Okay.”

“Nosy Bear” by Fran Krause should almost be required by law to be accompanied by the lovely and inspirational making-of video showing the short’s peculiar production process. But, in all seriousness, “Nosy Bear,” holds its own quite nicely, and the only fault I can find with it (and it’s probably not a flaw at all) is that it’s far less ambitious than Fran’s previous films such as “Mister Smile,” “Moon Raker,” or his daring video collaboration with his brother Will “Dog in a Burning Building.”

“Summer Bummer” a new two-minute short by Bill Plympton, was made for Showtime (same as Hertzfeldt’s “Wisdom Teeth”), and made in about one week. I need to see this one again because the images came so fast and furious that I lost the thread at one point. But, that could just be me, and I may not feel that way on a second viewing. Thematically, it covers similar territory to Bill’s Oscar-nominated “Guard Dog” in that the main character imagines terrible and impossible dangers looming around every turn. There was some lovely animation and sophisticated layouts in the film, both of which demand another look.

“Codswallop” by the Brothers McLeod artfully presented two scenes at once, much like the explorations of animator Paul Driessen. I’m not sure I always understood what was going on, but I wanted to see this again. It seemed like one of the classier productions in the show.

Let’s hear it for Bill Plympton and Pat Smith! Their maiden festival was sold out, and they have plans to make this an annual event, spread over a couple of days of screenings. If there’s one thing the NY animation community has proved, there can’t ever be enough venues for animators to view films. If they build it, we will come. Especially if there’s cider on tap.