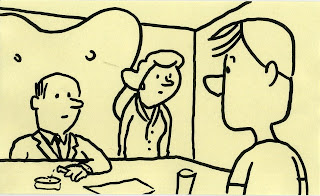 Tonight is the last day of my SVA Animation Careers class. This is the first time I've taught the class in the fall and it's been a real pleasure. In the past the only opportunity seniors had to take my class (which is a graduation requirement) was the Spring, smack in the middle of the mad rush to complete their thesis films. But whichever season the class hits, there's been one consistent variable among the students: a fear of writer's block. I get a lot of questions about that and it's a curious thing.

After the writers block questions flared up this term I asked the students, "How many of you have gotten ideas for future films you'd like to make as you've been working on your thesis films?" Every single hand in the room went up.

When you are being creative and in-process on something, ideas just seem to flow––ideas and solutions for what you're working on and stray bits of new ideas you'd like to explore in the future.

I've brought this up before, but I think I learned something about creativity by being the son of an Ad man. My dad would use his entire 4 hours-per-day commute to fill backs of envelopes and scraps of paper with scribbles of new campaigns, concepts, logos, etc. One doodle would lead to the next. But, he would have never gotten to the best stuff without having gone through that process. Quantity of ideas lead to quality. His job was just to put them all down on paper (as fast as his hand would allow) and with the understanding that the good ideas will stand out. Creativity and editing are separate stages. I think a lack of awareness in this area is what is confused with writer's block.

For example, I develop, write, and pitch proposals to networks each year, but I don't think I would be accomplishing that if I began development with my editorial hat on. To start that way would be saying, "What's the best possible idea I could think of?" That would be a sure way to kill creativity because it sets an impossible standard for any ideas to follow. A better beginning would be to ask your self: "What do I enjoy?," "What areas of interest of mine can I start with to get things flowing?"

After all is said, writer's block does exist--just ask Stephen King, who has used it as a central topic in many of his novels. No matter how comfortable we get in our brainstorm process, there will be times when we hit a wall. But, there's always options or exercises to help with that.

When I had trouble starting the storyboards for my latest film, I engaged Willy Hartland to do the storyboard (see one of Willy's original panels above), thus allowing me to focus my attention elsewhere. And, you know what? Being able to build off of what Willy did gave me the confidence to get started, even allowing me to take some of his sequences to the next level and reboard certain sections with new ideas once I figured out what I was doing. And, none of that is to fault what Willy did. I love his storyboard. But, just a like a creative brainstorm, a first storyboard is a conversation starter. Solutions and the right path to the finish emerge as you work. They don't come as easily (or at all) by staring at a blank page.
Posted by David B. Levy at 4:47 AM

New ideas shouldn't be too hard to come by, especially not for students it's the "block" in the process of making/writing those pieces that can be the obstacle.

My playwriting teaching, the very great Suzan Lori-Parks, told us she always worked on several projects at once. Part of this is procrastination, using one project to avoid working on another, but another part serves to detour around these blocks.

Co-incidentally, she would often refer to the craft as "playwrighting" to make the connection between the creation of a story and the construction of a ship.