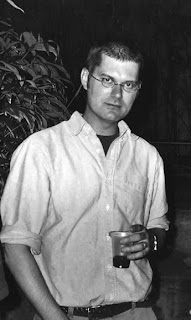 The one and only Mo Willems, animation superstar turned amazing children's book author, caught in a snapshot while attending an ASIFA-East festival last decade.

Over the years I’ve flirted with the idea of trying to develop as a children’s book author. Starting in the late 90s, I illustrated a steady stream of books for Simon & Schuster, Scholastic, and Golden Books. These were all Blue’s Clues titles. This opportunity came from working on the series that spawned them. All I had to do, initially, was take a test to get on the approved list of illustrators. After that you just waited for the phone to ring.

Starting around 2004, I wrote a half dozen original manuscripts of my own book ideas, created some concept art, and submitted to an agent or two and the odd publisher. Despite some interest and encouragement, no deals were forthcoming. Then, one day I asked my friend, Mo Willems, for advice. He said that putting a viable children’s book together is much more work than people think, and advised that it’s absolutely necessary to rough out the entire book before approaching an agent.

Unlike the world of pitching animated series ideas, when it comes to children’s books, you absolutely need an agent. Publishers only want to look at books that come through agents, knowing that agents only represent books/authors that have merit and sales potential. Agents act as the buffer zone for publishers. They fend off all the "unsuitable" books that publishers don't have to see.

Once I was armed with Mo’s good advice I can’t say that followed it. Instead, I tried another handful of book pitches in my own half-lazy way with no success. Up until six months ago I would have said that my so-called attempts at cracking the world of children’s books were over. But, half the fun of a career is not being able to predict what’s ahead.

While making an original animated series pitch with a couple of partners, we enlisted a wonderful comedienne/writer/actress to voice one of our characters. I loved her voice and she loved our project (the latter of which comes in handy when you’re asking an established talent to work on spec). Half way through our production, she asked me if I would be willing to do some spec work for her, illustrating a children’s book she wanted to write. She presented two raw ideas and I picked the one I was interested in. She wrote a few drafts and I designed the characters.

A couple of months drifted by until I could jump back on the book project, but when I did I remembered Mo’s advice: “rough out the entire book before approaching an agent.”

So, I decided to rough out the entire 32 page book and take 5 or so spreads to full finished color. Laying out the book, figuring out the page flow, type design, etc., has been a blast. I see now what Mo meant. The book just isn’t there until you go through that process. Sure, there’s the “voice” of the author’s writing, but the other “voice” is how that story unfolds into a page-by-page visual experience. Why would an agent or publisher “get it” without you having done that work?

My experience finally utilizing Mo’s wisdom reminds me how often we go around collecting good advice, but so seldom use it. Still, better late than never.
Posted by David B. Levy at 5:20 AM

It seems like the publishing world is changing pretty quickly, though.

Amazon's eBook Store & Apple's iBooks are disrupting the publishing industry, taking agents out of the equation for those that choose to self-publish. Writing a book isn't like recording an album or making a film; there are way fewer upfront costs. A number of writers are self-publishing and making a good living off of it. Interesting times we live in. I'd be interested to hear Mo's take.

Can't argue with the "rough it all out first" advice though. Every time I've ignored that, the project has been a disaster.

Hi Jim,
Good points on the self-publishing route. That is certainly an option, although I would guess there are more people that self-publish to little or no success than there are people who make a good living off it. The challenge there is, once you self publish a book, how do your potential costumers discover it among all the noise out there?

(I realized that the previous comment came off as a self-pimp. Apologies.)

>The challenge there is, once you self publish a book, how do your potential costumers discover it among all the noise out there?

My guess? Two ways:
1. Promote what you do on your social network in a way that doesn't alienate your friends.
2. Make content that is so damn good that your friends will want to tell their friends about it, thereby building an audience slowly and organically.

I don't mean that in a cynical way, but just in acknowledgment that self-development often takes time. As animation peeps, we are lucky that our day jobs ARE creative and help to build our skills, increase our connections, etc... while we develop in areas of interest over the long haul.

Jon Acuff's book "Quitter" talks about that same ideal. Keep you day job while working nights and weekends on a passion project. He also talks about how to know when you're in a good position to let your dream project become a full time proposition. Self-publishing is a tough racket to make this happen, but it's I think it's also the best way to learn what works with an audience.

That's my personal goal: to keep working on the webseries, continually leaning and tweaking until either the project takes off or I decide it's not working.

Or course, deciding if your book if worth pitching instead of self-publishing depends on the type of material you are publishing and it's intended audience. In the case of children's books, I'd imagine you'd have a better luck getting your book out there by publishing through a publishing house, rather than on your own (if only because of the standards a potential customer associates with such a place). While there are definitely exceptions to this, there's generally something, in the case of young children, which would have to make parents comfortable with purchasing something for them, sight unseen.

On the other hand, there are types of books with less specific audiences that I think would be perfectly suitable for self-publishing. For the moment though, I don't think children's book are one of them (that is to say conventional children's books. Interactive iPad app books don't count :) ).
-Avi