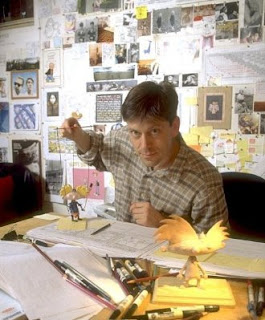 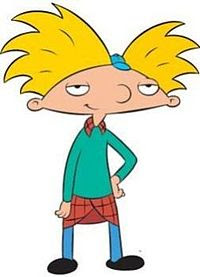 When I worked at Nickelodeon, Blue's Clues brought in a regular series of guest speakers to give talks in hopes of inspiring our crew. Among the great people that passed through were George Griffin, J. J. Sedelmaier, Emily Hubley, and, one day, it was Hey Arnold! creator Craig Bartlett. His series was smart, funny, warped (think bully Helga's relationship with Arnold, whom she secretly worships), and ethical at the same time.

Near the tail end of Hey Arnold!'s five year production in 2000, execs started to look for edgier and more off-beat comedy series, in a trend that continues to this day with CN's Adventure Time and Regular Show. To the industry powers that be, the slightly gentler and calmer Hey Arnold!, as well as Jim Jinkins' Doug, felt as if they belonged to a different era. With such attitudes, it's not surprising that Bartlett and Jinkins would find their next success making shows for ages 2-5.

Bartlett's first series culminated with Hey Arnold!: The Movie in 2002 and after that he created several excellent pilots that failed to score series pickups. I remember visiting with him in L.A. at Cartoon Network in 2004 and, although he was his usual affable self, his frustration over his stalled pilots was obvious.

By 2009, his absence from TV ended with the debut of Dinosaur Train, a hit new series for PBS Kids.

On June 24, 2005, Bartlett sat down for interview for use in my book Your Career in Animation, which I'm happy to share below in its entirety for the first time. Some time I'll have to do a follow up with him to get more specific, but the purpose of this interview was on general career topics. Enjoy!

1-Where did the inspiration for your show ideas come from?
I always tap into my own experiences as a kid. And magnify them hugely, of course.

2-What was the biggest challenge, production-wise, in setting up your series?
Getting through the first season, before everyone has seen it and you can finally just run episodes to show them what you were talking about. The first season is where your idea can be "noted" to death.

3-How did you find your creative team?
The core team was made of friends that I had worked with on other projects. I'd worked in animation for more than 10 years before I got my own show, and I think it helped. 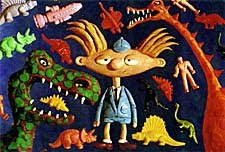 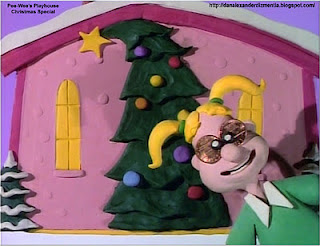 *Above two stills show the prototype for Hey Arnold, which debuted as a short for Sesame Street, and a still from a "Penny" cartoon made for Pee Wee's Playhouse, both of which experimented with an innovative 2D and 1/2 stop-motion clay technique.

4-How much time do you (or did you) devote to your show
each week?
Probably 50 hours on average.

5-Can you describe how your show was pitched? And how many times over what period of time?
"Hey Arnold!" was pitched in August '93 to Mary Harrington in Burbank when she was head of Original Animation for Nickelodeon, kind of by accident, after myself and 5 other "Rugrats" writers had pitched several ideas we had come up with together. We talked for an hour or so and were out of ideas, so we pulled comics and other things out of our briefcases, just trying to find out what Mary liked. I showed her my videotape reel of old "Penny" cartoons that I had done for "Pee Wee's Playhouse" -- at the front of the reel were 3 Arnold cartoons that I had made myself, in the claymation "Penny" style. That got Mary's attention. I then showed her some Arnold comics that I had drawn for "Simpsons Illustrated," and it seems that one particular panel of Arnold screaming was the real clincher for her. She laughed and laughed. When the meeting adjourned, Mary buttonholed me outside and said that she wanted to pursue Arnold further. We six "Rugrats" writers then adjourned to a pizza place and debriefed about the meeting. The other five guys sensed that I had somehow gotten my own show out of the group meeting. Paul Germain said, "Arnold is gonna go to series, mark my words." I met with Mary over the next four months, refining a pilot outline, and the pilot was greenlit in January. The pilot was made in '94 and the series was greenlit a year later. 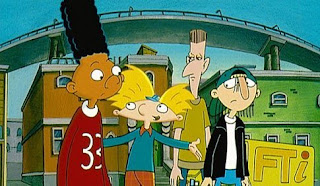 6-What is your opinion on the way network’s buy or develop shows? What would you change about that if you could?
I have been in development for years since I went to Cartoon Network at the end of 2001. I've pitched to them, to Nick, to Disney. I've met most of the development people in that world. No development person is obligated to tell you when your idea is dead with them, in other words to put it out of its misery and allow you to move on. They just don't return your calls and emails and let you guess.

7- Do show creators get stereotyped as comedy or action or preschool or adult etc? If so, what can be done about it?
As the creator of "Hey Arnold!" I am considered "soft." It's really annoying. I tried to break away from that by pitching a show to Spike called "Hellville," a show that takes place in Heaven and Hell -- Heaven is like a weird cult, and Hell is pretty much sex, drugs, and rock and roll. Spike passed on the show, but I send that script out so people won't stereotype me.

8-What role has attending animation festivals/events played in your career?
I go to the local events in L.A., but have only been to a couple international ones: Hiroshioma and Annecy. Haven't won anything at a festival. The international animation community is great.

9-What methods of self-promotion have you employed to get your name out there?
Hardly any. I keep thinking that my resume should speak for itself...

10-Are you a member of any animation/art or entertainment guilds or organizations? If so, what role has that played in your career?
I'm in the Academy of Motion Picture Arts and Sciences. I go to the screenings a lot, because their Goldwyn Theater in Beverly Hills is the best place to watch a movie anywhere. The audience is appreciative, they stay through the credits... it's where grownups watch movies. I guess it's also for networking, but I'm pretty low-key about it. I just love the movies, and I like to be on the nominating committee for animated features. You get to see the whole field of features that come out every year.

I've been in SAG since the start of "Hey Arnold!" which provides my health benefits, and I just joined the Writers Guild a week ago because I'm writing a live-action movie for Nick/Paramount. We'll see what that involves.

11-How do you stay on top of industry news and trends?
I like to read Variety -- excellent reviews of film, TV, and Legit. They have great columnists like Brian Lowry and editor Peter Bart.

12-What books should be in every animation library?
I love Leonard Maltin's history "Of Mice and Magic." And Preston Blair's cheap paperback books for drawing tips.

13-Have you gotten to meet or work with any of your animation heroes? If so, whom, and in what capacity?
Matt Groening is my brother in law. I enjoy walking through the ComicCon with Matt, because that's a world where every single person knows who he is. The guys who started drawing the Simpsons, David Silverman, Wes Archer, and Brad Bird were just a bunch of guys at Klasky Csupo once upon a time, when we were starting "Rugrats," and now they are big shots. Brad's career has been amazing. If you go to festivals, you can meet the international animators like Plympton, Newland, Preistley, Dreissen. These indies are always very nice people.

14-How different was the original vision for yourshow from what made it to the screen?
"Hey Arnold!" morphed hugely from claymation short to indie pilot to series, and even continued to evolve as the years went by and we found new ways to draw it. Some people felt that its original "spaghetti arms" look of the first season was better than where it ended up. Oh well. We did our best.

15- Is there any specific legal advice you’d pass along to future creators?
Get a good lawyer and read your deal. Try to get some kind of ownership/profit participation -- if they won't give it, find someplace else that will.

16-What are the typical daily duties of a creator/show runner on a TV series or feature production?
Each show is different. I concentrated on the story aspect, was most involved at the beginning and the end/post production parts of each cartoon. I love making the cut, being responsible for getting each show to length. And the mix is always fun, I never miss it.

17- Over time, has the amount of creative work you delegate to others grown? If so, how has that reshaped the show?
I stayed in it as much as I could. Delegating most of the art means that if your artists change, so will your show. But it's impossible not to delegate. It would make you crazy to do all of it.

18- How important, if it all, have self-initiated independent films or projects been to your career?
My Arnold shorts got it all started. I think everyone who wants to create a cartoon should try to make their own short to get the ball rolling. Your own short reveals your sense of art, story, timing, humor, tone. It tells much more than just pitching your idea ever could. Make a short! 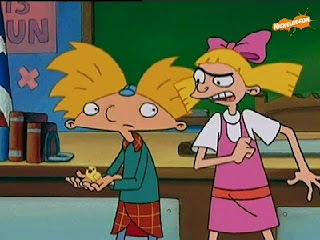 Always felt like Mr. Bartlett was a little underrated... I really dig his stuff from the 80's especially, like the 'Penny' cartoons. Such a fun vibe and aesthetic to those.

Great point about his content being a little less 'edgy' than a lot of the creator-driven stuff that came along a bit later. But, maybe some new stuff in the spirit of 'Hey, Arnold' and Jinkin's 'Doug' would be refreshing nowadays.

A little more balance to the 'zaniness' factor in TV animation might work nicely! (Not that I don't love 'zany'!)

Seems to me, there's room for everything. :)

Hi David, you'll be happy that I'm going to see your buddy Fred in a few weeks but before I sign the release agreement. I was wondering if i should copyright anything before I do. Looked in your books and was unable to find any info on that. (maybe I just missed it).I was wondering what your opinion on the matter was? Thanks for all of your help.