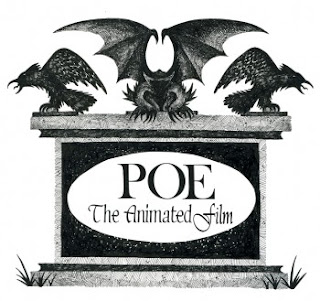 Sometimes a single opportunity can allow us to support a worthy project, a friend, and help promote an art form itself. On March 6th Oscar-nominated filmmaker Michael Sporn announced his first-ever Kickstarter campaign to help raise funds to complete a few minutes of final animation for his animated feature film POE. It’s my pleasure to use this week’s Animondays post to help his cause.

First, on the project of POE, everyone who works in animation or enjoys the medium as a fan has something to gain by supporting this film. Today, animation is flourishing in mainstream feature films for children and families, through special effects in big action blockbusters, through innovative video games, in prime time and late night programing for “adults,” in preschool and children’s TV entertainment, as well as through the new media platforms of eBooks and apps. But, the one area that has the most untapped potential is in the intelligent and artful indie animated feature. POE is the rare project where subject, medium, and filmmaker (including collaborators such as the brilliant animator Tissa David), may all line up to help create something that can’t be found anywhere else.

Michael happens to be a friend of mine, but even if you don’t know him, he’s probably already helped you become a more thoughtful animator through his insightful and inspirational Splog posts since 2005, and maybe also stretched your perception of what the animated film can be. On the latter, his studio has led by example since 1980, making some of the most artful, daring, and affecting animated films of all time (go to the screenings button on this link to see this month’s TV schedule peppered with opportunities to see some of his films). A few of my all-time favorites include “Dr. Desoto,” "Abel's Island," “Morris’s Disappearing Bag,” “The Man Who Walked Between The Towers,” “Mona Mon Amour,” “Champagne,” “Ira Sleeps Over,” “The Marzipan Pig,” and “The Hunting of the Snark.”

As the owner/operator of one of the longest standing independent studios in the history of US animation, and through his formative years being trained in the art and craft of animation by the likes of John Hubley, Tissa David, and Richard Williams, Michael is a key creative link between animation’s golden age and today.

Michael has said that with POE he’d like to “give animation a grown up push.”

As grown ups who both love and work in animation, let’s help the man push.
Posted by David B. Levy at 12:07 PM