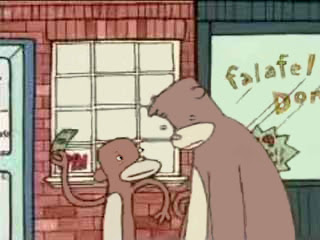 Welcome to the first edition of my weekly ASIFA-East’s president’s blog, ANIM-MONDAYS. As you may have already guessed, I’ll be updating this blog page every Monday. There are so many great blogs out there. In fact, I don’t feel fully into my day until I’ve had my morning coffee and a visit to such great blogs as Michael Sporn’s insightful splog at www.michaelspornanimation.com, Jerry Beck’s and Amid Amidi’s tasteful cartoonbrew.com, the newsy awn.com, author Michael Barrier’s posts at michaelbarrier.com, and the (almost too varied) cartoon blogs available at frederator.com. With so many voices already in the mix, ANIM-MONDAYS will differ in that it will be exclusively devoted to topics revolving around the New Yawk area animation scene.

For this first entry, I’m happy to feature filmmaker’s Fran and Will Krause. I first met Fran in 2000 when he was fresh out of RISD, riding the festival award-winning wave of his thesis film, Mr. Smile. At the time I was an animator at Blue’s Clues and one Friday, our supervising animation director, David J. Palmer, showed us Mr. Smile. “Check out the way he draws hands!” Palmer pointed out. We were transfixed.

Fran’s first animated films at RISD were experimental art pieces. Fran changed direction when he heard the audience reaction to funny films made by classmates such as Jesse Schmal and Mike Overbeck. Mr. Smile expertly blended humor with Fran’s love of Estonian animation, which is often bizarre, funny, and fascinating at the same time. There must have been something in the water that year at RISD because a new wave of animated filmmaking was being born. I’m tempted to call it a Slacker New Wave (SNW). I use the word “slacker” affectionately because the films appear free and (almost) effortless in their execution. SNW works also amble by a slow pace that tends to explore quiet and sometimes awkward moments instead of focusing on macho action, blood, and guts. Even the voices in their films are usually soft, casual and quiet.

After seeing films by SNW filmmaker’s such as Jesse Schmal, Fran Krause, and Mike Overbeck, I imagined that they were conceived by writing random words on index cards, throwing them in the air, piecing them together in no particular order, and then united them in some obtuse theme. Schmal and Overbeck have thus far been consumed by their successful careers in commercial animation and have not yet further devoted time to making films beyond their student triumphs. Meanwhile, Fran Krause has carried on beyond RISD to emerge as one of the top animation filmmakers today, sometimes working on new independent films alone (Moonraker and Box Factory), and sometimes working with brother Will (Robot Dance Party, Utica Cartoon). Incidentally, Will Krause is a highly accomplished animator/filmmaker in his own right, most recently making a big splash with his award winning direction of The 2005 Ottawa International Animation Festival signal film.

I have been teaching animation since 2003 and many students’ eyes light up when I bring Fran Krause into class as a guest speaker. Most know his work through his first pilot for Cartoon Network, the aforementioned, Utica Cartoon. Fully animated, voiced, photographed, and composed by Fran, Will, and their Animation Cowboy collaborators (pals made up of fellow RISD-ites), the film was like nothing else done at Cartoon Network (before or since). More a glorified independent film than corporate pilot, it was difficult to pin down. As much as the pilot seems very brothers Krause, it also bore the scars of network notes and revisions. The original idea that Fran and Will had pitched was about the rivalry between the animals at a zoo and the students at a nearby school. Pitched as Utica Zoo, it instead became a cartoon about anthropomorphic animals living among humans in a human world, without any noticeable rhyme or reason.

Fast forward more than five years later and Fran and Will Krause are putting the finishing touches on a brand new pilot for Cartoon Network. From what I’ve heard, this time there is action mixed with the comedy, and actors (not Animation Cowboys) are supplying the voices. Perhaps best of all, the Krause’s offer hope that there is room for New York independent filmmakers in a world of network development that too often caters to the Hollywood house style. Could the Krause’s lasting legacy be the merging of the two worlds? Who knows? These brothers are just getting started.
Posted by David B. Levy at 3:55 PM

Will and Fran make NY a cooler place.
Looking forward to this column each week.

I'm definitally looking forward to what's going on this blog.

Fran and Will Krause definitally have a unique world at their hands, one which can be taken anywhere and into anything.

Great to hear from you all!...and I thank you in advance for returning next Monday for more. Don't be shocked to see yourself featured in an upcoming blog entry. : D
cheers,
Dave Levy

Thank you very much for the post, as well as the new blog. I look forward to reading your future posts!

Hi Dave,
Great stuff! When I was working in NYC studios, I wanted to do something like this for the newsletter, but blogging is even better - it's really needed, so everyone can know about the great artists in NYC!

This is cool! Welcome to the blog world! Can't wait till next Monday.