New York City Animation and the Ghosts of Union Past 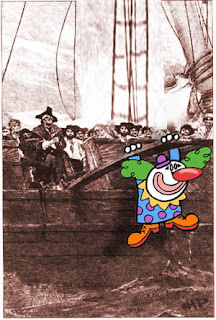 Once upon a time New York City animation was unionized. By the early 1980s, the union’s membership and influence waned as the local industry shrank and independent studios accepted low paying (below union scale) animation work from clients such as Sesame Street as a means of survival. Thankfully, animation in the big apple proved far more resilient than the union that sought to protect its member’s interests. However, recent events in NYC animation, such as the erratic behavior of specific studios, the sudden layoff of a whole crew at AniMagic, and the vanishing benefits package at MTV networks, have got some folks whispering about how a union might play into the whole mix. I don’t claim to have the answer to this question, although many are of the opinion that a union would send work away from NYC as well as threaten the existence of small independent studios.

I’ve often believed that there’s a circumstantial problem in this business that helps create conditions that make some desire to unionize. Firstly, each year, there’s a new batch of students bursting out of the animation schools. In NYC, alone, I’d estimate the animation grads per year to be around 110 individuals. The new trend is for studios/companies to “hire” these students as interns. Unpaid interns. Maybe this is similar to the old days of the apprenticeship system, but I don’t think so. An intern is someone still in school, helping out a few days a week at a company, in exchange for school credit, experience, and contacts. Secondly, animation artists, in their first few years in the business, have fewer family obligations and often consider a studio to be their new fraternal order or clubhouse. In such a way, the sacrifices they make by working unpaid evening and weekend hours seem less painful. Things get further complicated because this group often feels (and rightly so) that they are still paying dues. In addition, they have a natural fear about losing their jobs, while at the same time, feel grateful to be employed in their industry of choice.

While this is a non-union animation town, it doesn’t mean that class action can’t be utilized. I worked on a series for a big network where, initially, there were no benefits or ergonomic equipment. The staff rallied together and meetings were held with producers and network representatives. In the end, the staff won all their victories, even causing conditions to improve at large rival studios that were then forced to up the ante of their own employee offerings. In a lesser (but, still notable) action, the same crew successfully petitioned their director for better tech service to their computers, each artist signing their names to a petition.

But, crews do not always come together in the right way, for the greater good of each other. Sometimes they come together simply to lick each other’s wounds. In this scenario, everyone rallies around each other to soldier on, in spite of all kinds of abuses such as mandatory late hours and weekend work without pay, arbitrary firings, demotions, and harassment. I don’t trust that people will always have the confidence and leadership to tackle these issues on their own. I suppose the argument is; should they even have to? I merely ask the question and open the floor for discussion. For those wishing to learn more about the history of the animation union in the USA, I recommend Tom Sito’s book, Drawing the Line, although his honest retelling of union battles fought and lost, sometimes help make the case against the union.
Posted by David B. Levy at 3:43 PM

What about freelancing. I feel like that might be a current trend now among graduating animators. Some of my friends from Pratt Institute have been relying on freelance work.

And what's all this about lay-offs. What are the general reasons for animator lay-offs?

yeah, well freelance just about describes most NYC animation. Although, the studios and conditions I wrote about happened at full time staff jobs, where taxes are taking out and some benefits usually offered.

Sudden layoffs can happen for a variety of reasons. Sometimes a show is canceled unexpectedly or by late payment by a client which can interrupt a small studio's payroll..

Great post Mr. Levy, you touch on some valid points that all students should be aware of, they are the cheap labor that push the experienced worker to the streets. I think the problem is many students leave school not knowing their worth and are always humbled by just getting a job for any rate. Therefore, forcing the experienced worker to opt for the lower rate or be forced not to work on that job because of his higher demands. I think students are lacking a solid foundation in business. After all this is the business of animation and what good is a great animation artist if he is not a great business man. I think many students should know their worth and not be afraid to ask for it when it comes to that.

Don't forget, there is a balance to the natural order of things. Students do have to gain experience and pay certain dues. There's lots to learn and this is journeyman's field. You never stop learning. So, I'm not exclusively saying to students that they should demand unrealistic dollar amounts or positions above their station. I'm just saying that nobody should be a doormat. We each have to be our own advocate, especially with the lack of a union. Just keep your head about it.

In reality, students or recent grads don't really take many jobs away from seasoned pros, because they are filling the gate way or entry level positions. But, there's always stories about producers looking for a magic student to make a feature film for them on a ten dollar budget.. but, those are the people to avoid with a ten foot pole. They are not based in reality.

I understand the notion of paying dues....but students right out of school have enormous loans to pay.

I don't agree that students should go into the field believing that they have to do next-to-free work to get anywhere.

Why shouldn't we set higher standards for those who get out of school in terms of salary, benefits and better opportunities.

While I do agree that they shouldn't ask ludicrous pay, most studios in ny pay way below what is considered the norm. You can see this in the graphics artist guild guidebook.

It's not enough to say...that's the way it's always been or that this is a journeyman's field- I'm not even sure what that means. We're supposed to keep apprenticing until the person above us gets promoted or leaves the company entirely? What if one is skillful enough and is at that level already?

I do believe experience is important, but if someone is talented, responsible and skillful, then....they should get the job.

And why should a student intern for credit? This has always been a ridiculous policy that always upset me in school.

I'm supposed to pay $500 dollars (and pretend i'm learning as if i were in a real college class,) to get an internship at some big studio...where all i'll be doing is copying storyboards and faxing paperwork and making coffee runs?

Most studios in NYC also do this. Interning is nothing more than that. And if you stay there the longest....you may......maybe.......get a job there.

When i interned during school I interned without going through SVA and while I did it for free, I wasn't making copies, and i wasn't buying coffee. It was hands on....I got to inbetween, and cleanup storyboards....and they didn't use them, so i never felt like i was being cheated.

The owner of the company would sit down with me and explain what he didn't like and why, and how to go through those processes correctly.

Internships are overrated in animation. There's a strong possibility that while interning and getting next to no money, you will be asked to work on the actual show the studio may be handling at the time. This is all the while an experienced animator is getting paid (probably not enough at that) to do the same thing.

If that's what you call paying dues, then I believe this whole industry needs an overhaul.

Hey Tiki,
The internships are a good fit for some. Although, not everyone goes through that route. In fact, I never interned anywhere. I was fortunate enough to work at Michael Sporn's studio right out of school and basically was paid to learn while under his roof. It was amazing and I wish everyone could have that experience.

Tiki, there is no one price for animation in town. Price is set by budgets and animation technique.
Only a union could create a uniform pay scale, but part of the reason that the union died in NYC was that small studios could not raise enough union scale work. They had to take on smaller paying jobs to stay in business.

But, my advice to you is to have a little trust in other people. I've always assumed that I'd be treated fairly and I have been. You have to put out that kind of faith.. and at the same time I have very well developed bull shit detector that works along with that. I've always steered clear of negative studios/people. It's made a happy career for me.