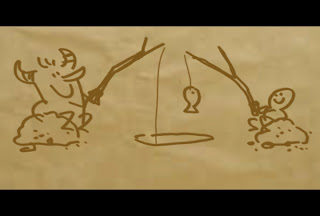 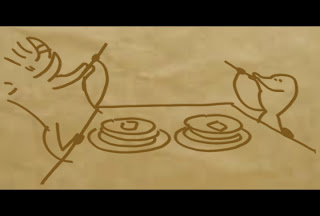 Some time ago, I posted on the making of my latest film, Good Morning. A few people wrote asking for a link to the film. Here, for a limited time only is a link to the film. I believe it expires on Thursday. Hope you enjoy viewing it. http://senduit.com/f76986

Good Morning is my sixth film, not counting my thesis film. I wish I could say that these half dozen films add up to an impressive body of work, but that’s not the case. Don’t get me wrong. Each film was something I felt I had to do at the time. More importantly, each film advanced my career, allowing me to grow to become an animation director. I can’t stress enough the value of doing personal work is to any career. Without it, you’ll just have a reel of other people’s show clips. You disappear in such a real, no matter how good it is.

I’ve had some advantages when it comes to making personal films. For one, it’s always been in my blood to do so. I’m one of those little brats who experimented by making animation on super 8 MM and on the family’s first VHS camcorder. I lived and breathed animation as a child, much like I still do now. Making a thesis film at SVA was a natural thing to do, besides being a graduation requirement. However, none of this made me a disciplined animator or filmmaker. I always felt my ideas were years ahead of what my current skills could deliver. I still feel this way, no matter how many years and films go by.

The other thing that’s motivated me to make films is fear. Good ol’ fear. Fear of not being good enough or worthy enough to hold a place in this industry. I also desperately wanted to tell stories, direct, animate. All things I didn’t assume that anyone might ever pay me to do. Now, I am paid to do these things, but I still make films. I still have that particular hunger that films can only satisfy.

Looking back at my first post student film, Snow Business (1998), it still remains a high mark. At the time I wanted to make a universal family film. In fact, this film was sold to TV in many European languages, so I know that I succeeded in that goal. I remember being shocked to hear people ask me if I was going to make a sequel to Snow Business. Some how, I thought this very question was evidence that I might become I pigeon-holed as a family friendly filmmaker, even though I only had one film to my name. I didn’t know what kind of filmmaker I was, beyond being a beginner. I allowed such minimal external pressure to influence the next films I chose to make. Today, I realize the harm this did to my independent animation career. One should never make personal films to please anyone else.

It took me ten years to learn this lesson, but I did eventually learn it. With Good Morning, I start again fresh.
Posted by David B. Levy at 5:57 AM

I remember you showing us this film when you visited SVA for Eric Weil's Storytelling class. The song was so catchy, it took us days to get it out of our heads (& that's a good thing!). I'm glad I saw it!

For some reason, the site you uploaded the video to say's it's having "technical difficulties". I wish it told me that BEFORE I had to wait 60 seconds. Oh well, I still remember it well enough in my memory.

You did a great job on this film, David. Kudos to you! You deserve it!

Hi Michael,
Thanks for the kind words! So glad that you're checking out the blog too... I'll check on the link and make a fix if need be.

hey dave, just wanted to say the link worked fine for me... hope it does for everyone! a very fun film, thanks for posting it...

Thanks, Tim!
I checked the link and it worked for me as well.
Download away, ladies and gentlemen. Enjoy!

A real delight, Dave! Makes me want to have kids so I can wake them up and make pancakes. What came first -- the song or the story? The kids vocals is a really great touch.

Thanks for sharing the film Dave, I liked it!

It seems like film making has to be an insatiable desire, or you'll never get past that one student film. I still remember sitting with my brother and spending hours upon hours of my childhood on Disney Animation Studio. It ran in MS-DOS and was just black and white pixels, but we made that thing work! I remember saving our pennies from a newspaper route to buy Hash Animation Master and animate a film we had boarded. We promptly discovered that, as middle schoolers, we were totally incapable of operating the software! Of course, going way back, I remember making flipbooks from those yellow stickie pads. I would take them apart and sort of stagger the sheets so it was easier to flip.

Thanks for offering wisdom/inspiration to someone who still finds it hard to believe that he might actually get paid to make films...especially the ones closest at heart. It's encouraging to hear that the blood, sweat, and tears that go into a personal project may actually all be worth it, and those childhood days may not have been wasted!

The question of being pigeon-holed is one I'm already pondering even before I finish my first legitimate short. It sounds like you're saying you almost pigeon-holed yourself mentally. Any thoughts on steering clear of that? Do you think it tends to be more of an external or internal pressure?

howdy cliff,
I posted on the making of Good Morning as one of my first posts on this blog. Check out the archive and you'll see how the short was concieved.

Hi Mike,
There are external pressures and influences on us that can taint our work. Amid Amidi just told my class last night that nobody should work more than 4 yrs in the industry. After that, he says, they should get out and start their own studio or something because the industry has a negative effect on our personal creativity. I don't know that I agree with his statement all together, but, there's some truth there.

Personal films are best when they are personal. And, oddly enough, that's when they are the most universal too. We shouldn't let industry fads or trends creep in and cloud up our own vision. My problem was I had a lot of interests pulling me all over the place and it ended up negatively effecting my films.

Hey Dave,
I really enjoyed the film. It was super appealing and catchy. Thanks for posting it!

Aw, it's expired :(
Anyone got a mirror link? I wanna see!