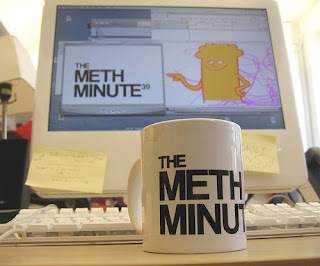 The ASIFA-East season of events officially ended with our June 26th salute to Frederator’s Meth Minute 39 web series. Panelists Fred Seibert (Frederator president), Dan Meth (the series creator), and Carrie Miller (the series producer) were on hand to discuss the making of this unique series.

The Meth Minute 39 is a very forward-looking series, a glimpse into the not too distant future of series animation. A few years ago, Meth was a struggling freelancer, with a knack for short, punchy, and funny web animations that happened to score millions of hits. I recall Fred telling me about Dan Meth and his successful viral animations. Shortly after Fred and Meth first met, Fred asked Meth to bring his studio to Frederator where the animator could work on his own projects and freelance. In reality, Meth was a studio of one, so the move was not overly complicated.

At the ASIFA-Event I made it a point to mention how impressed I was at Fred and Meth’s openness for collaboration. Neither knew where this loose work arrangement might lead. In fact, Meth initially used his proximity to Fred to pitch pilot ideas for Frederator’s Random! Cartoons. Fred wasn’t interested in any of Meth’s pilot pitches, but neither he nor Meth seemed discouraged by that. Eventually, Meth dreamed up a pitch for what would become the Meth Minute 39. His idea was to make a grab-bag series of unrelated short internet cartoons–one per week, over 39 weeks. Eventually, the plan was ironed out and Fred began to self-fund the Meth minute, which as a series of independent films, would air on Channel Frederator (a broad band internet channel) as well being widely available on youtube.

Rarely does an individual hear about a series launch that they can possible imitate themselves (maybe even in their own living room). Each of us can pick up the baton and make our own Meth Minutes, possibly even making 39 shorts over 39 weeks. Fred even hinted he might repeat this himself, although he wisely points out that its uncertain such a format would work for another filmmaker besides Meth.

I’m inclined to agree. Meth’s gifts perfectly suit this format. First off, he’s imaginative, funny, and has a real gift for timing and storytelling. While his interests are broad, including rock music, 80s pop culture, and video games, his focus is decidedly narrow–giving each cartoon a laser like precision. Unlike Robert Smigel’s TV Funhouse, which are too often bloated to (a patience testing) four minutes, Meth gets in and out without anybody getting hurt.

While the Meth Minute was set up to be a self-funded commercial loss, its clearly the opening salvo to a new business plan in the making. It has already spun off its own series, Nite Fite, which happens to be commercially funded by a real sponsor. How’s that for results? Before all 39 of the original Meth Minutes had dropped, it had already spawned a paying venture.

At a recent event at SVA, Ralph Bakshi fielded a question from someone in the audience who challenged that it was not possible to make your own feature and get it distributed towards making a profit. Bakshi answered, “You mean to tell me that there’s no way to do business? I don’t believe that. There’s always a way to figure it out. It’s your problem to figure out. Not mine.”

Fred’s venture with the Meth Minute 39 is in the same spirit. Make something good and get it shown, and, surely, a business model will present itself. What a way to end the ASIFA-East season! Our thanks to all our friends at Frederator for helping to set up this special event. Don’t forget to visit frederatorblogs.com to learn more about the goings on at Frederator.
Posted by David B. Levy at 4:06 PM

I love the quote by Bakshi, "Its your problem to figure it out. Not mine." I think that relates very strongly to one of your recent posts about the complaints that animators (and artists in general) tend to make.

Business models are always changing; the record industry is in such a transitory phase now with the proliferation and ease of theft. One solution is to focus on singles instead of albums (99 cents for a song on itunes). Other artists are giving away whole albums for free (Radiohead; Nine Inch Nails). Someone else will come up with something different.

Instead of complaining about how evil the corporations and the industry are, animators and artists should use their creative energies to figure out how to make it work for them. Your acecdotes show us that Bakshi and Meth both figured out a way. If you want something, find a way to get it!

First off, from Dan, Carrie, and me, thanks. What a great evening. We really appreciate it.

Secondly, thanks again. What a nice piece you've written about Dan.

Thirdly, George has it right. Bakshi has it right. I know people roll their eyes when I say we really have not too much idea of what we're doing, and we're just making it up as we go along. But, really, it's true. It's our problem to figure it out, and we're trying hard. Here's hoping someone comes along and makes it easier for all us, but in the meantime it's just one foot in front of the other. I'm sure we'll get somewhere.

Fred, thanks again, for giving us a window into your process. Cheers to you all on this venture. Clearly, this is just the beginning. I feel like our whole community is along for the ride, rooting you guys on.