Today, The Fleischer’s Stand Taller Than Ever! 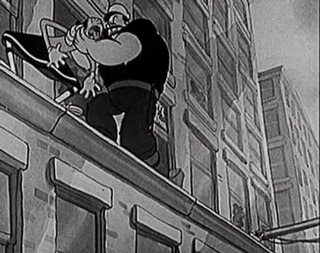 A couple of weeks ago the second Fleischer Popeye collection dropped into stores. I would make the argument that these films are the first fully realized character cartoons of the modern animation era. We can trace the modern character driven cartoon to the first Mickey Mouse sound cartoon, Steam Boat Willie (1928). Yet, today we know Mickey Mouse as a corporate logo more than a compelling character. A few years back, when the Walt Disney company began issuing its shorts on DVD in lovely tin box packaging, a whole new generation of animation artists were able to watch the chronological Mickey, Donald, Pluto, and Goofy shorts. In my opinion, the most interesting DVDs issued focused on Disney’s Silly Symphony cartoons, which retain their joy of innovation all these years later. Some of that joy can be found in the early Mickey shorts as well, but to watch a few Mickey’s back-to-back, the joy soon gives way to repetition-induced fatigue. I find myself wondering why they had bothered to reanimate Mickey or Minnie playing the piano for ten cartoons in a row.

Across the continent, The Fleischer’s were busy launching a major star of their own, Betty Boop. Betty immediately stood out as the only non-animal cartoon star, and unlike Minnie Mouse, this woman had womanly attributes that went far beyond a bow in her hair. The pre-code Betty Boop cartoons are loosely constructed and often surreal. Unlike Mickey Mouse, which had its roots in silent animation (the first two Mickey shorts were silent cartoons), the Fleischer’s Betty Boop was a modern sound cartoon reflecting contemporary American society, depicting immigrants populating bustling cityscapes. Mickey Mouse, in contrast, depicted country life and the nostalgia of a vanishing America. Maybe Disney’s nostalgic approach struck a larger chord with the public, because he was infinitely more successful than the Fleischer’s in the long run. How odd, that from today’s vantage point, we can be nostalgic for the Fleischer’s approach.

The loose approach of Betty Boop films get criticized (or underappreciated) in the light of more structured films that followed (think Chuck Jone’s Coyote and Road Runner series). Betty Boop offered a different approach, one no less valid, and one more close to Jazz music, where animators improvised gags in a sequence, not always knowing where it was all leading to. It could be argued that the Betty Boop shorts were so far ahead of their time that series animation is still trying to catch up. Recent pilots such as Frederator/Nickelodeon’s Adventure Time by Pen Ward, show that looseness can still be applied to today’s cartoons with a winning result. Betty Boop may prove to be far more influential than Bugs Bunny over the long haul.

Shortly after Betty Boop’s success, the Fleischer’s secured the rights to animate E. Segar’s comic strip character Popeye. Its hard for us to appreciate how brilliant the Fleischer Popeye shorts are. For one, since they are based on someone else’s creation, it tends to diminish the credit we might bestow on the Fleischer’s. Yet, everything from how Popeye walked, spoke, and moved had to be figured out for animation. The Fleischer’s not only rose to those challenges, they delivered so much more. I like to screen the Popeye short, “The Paneless Window Washer” (1937) for my animation students. While Mickey Mouse shorts might still charm an audience, Popeye shorts like this one, have the power to astound us. My students watched the short in amazement and awe. The layouts, timing, and characterization are superb. Should we not be extra impressed that such expertly constructed shorts came from the same studio that was making the free-form Betty Boops? Bugs Bunny and other star characters that followed at rival cartoon studios delivered laughs but, don’t always have joy in every frame as the Fleischer Popeyes clearly do. Run, don’t walk, and pick up the new Fleischer Popeye collection today!
Posted by David B. Levy at 8:41 AM

You have just cited elements that always come to mind when trying to put my own ideas together. Particularly, musical interludes with no particular direction.

I read an interview with Aaron Augenblick, in which he cites Fleisher cartoons as an inspiration. And his work is some of the best I've seen in the past few years.

Great article, I'm going to check out the Popeye DVD, reading this made me curious. I never got to watch any off them overseas. Thanks!

nice article, I love popeye, always use to watch it, Now thats its comming out on DVD, im goin to buu them , I like drawind the characters too!1