"The Wisdom of Warburton" or "The Art of War-burton" 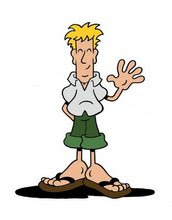 Today's post is so special, it required two titles. Additional titles sold separately. Collect them all.

One of the most important bits of wisdom I picked up came from Tom Warburton. It fell at out of his pocket while he was tying his shoes. Today, most know Tom as that lovable rogue who created Codename: Kids Next Door or as that funny guy who hosts the ASIFA-East animation auction every two years. Others may know him as that guy who owes me two bucks.

So, what bit of wisdom did I borrow from Tom? Early in his career, while working at his first job at Buzzco Associates, Inc., Tom got involved with ASIFA-East and decided to write a series of articles for the ASIFA-East newsletter spotlighting local studios and animators. To this end he had to contact lots of animation folks he hadn't yet met. By writing these articles, he not only enriched the newsletter and its readership, he also put himself in the position of fostering new relationships in the community. No doubt these relationships offered him insights and inspiration he might not have had without them. As we know, Tom turned out pretty well, so I can't help but assume that his formative years with ASIFA-East (and those articles) were part of his career cocktail. And, it doesn't hurt my theory that Tom admitted this to me himself. Achem.

While no one can follow any one set of instructions or advice and be guaranteed the same result, the same opportunities are certainly open to anyone. My time on the ASIFA-East board opened up countless opportunities, including the introduction to Blue's Clues through board member Nancy Keegan. There are lots of new faces on our board of directors as of late, and the smart ones will stick around and find their own unique ways of making a contribution that may serve the community, ASIFA-East members, and their own destinies.

The important thing to note is that building relationships (by volunteering with ASIFA-East or not) is not something one just does in the first years of a career. Its something you work at each and every day. In a similar way to Tom's ASIFA-East articles, my books have forced me into contact with numerous creators and executives I wouldn't have otherwise met. In fact, I start supervising animation on an animated prime time network pilot next month, which was created by someone I interviewed in my upcoming book on Allworth Press, Animation Development: From Pitch to Production.

These are tough times. We lost a lot of studios in the last year. But, I hope its a comfort to know that networking and relationship building are always within our grasp, no matter what the industry throws at us. As creative people, there's no reason we can't also be creative in how we network. There's no single way to do it. One only has to be true to themselves and be willing to put themselves out there while remembering that its a two-way street. Of course, you have to remember to move your car on alternate side of the street parking day.

The best and most effective networking is mutually beneficial. Note how Tom's articles for ASIFA-East offered deserved recognition for its subjects while helping its author plug in to the local scene and expand his own horizons.

One of the killer networking events in town each year is the KidscreenSummit, which is at the midtown Hilton February 11-13. Networks and production companies specializing in animation send delegates to this summit every year, but the price tag of attendance makes it prohibitive for the local animation community to come out in droves. I've been trying to do an event with the Summit for years now but, to no avail. This year I finally got smart and suggested a Q and A event with Tom Warburton, and Kidscreen jumped on it. Details below:

Cracking the Code—A chat with Codename: Kids Next Door creator Tom Warburton
February 12, 2009 - 4:30 PM to 5:15 PM - Find out what makes one of the industry's top toon talents tick. Kids Next Door creator Tom Warburton talks candidly with David Levy about his creative process, the realities of producing six seasons of a series, collaborating with network execs, maintaining your artistic vision, pitching effectively and much more. He'll also open up about his newest projects-rumor has it he's awaiting the release of his first kids book and has a pilot in production for Disney. www.kidscreensummit.com

In conclusion, It will be fun to share the stage with Tom and probe the brain of a man who owes me two bucks. After tense negotiations with the Warburton camp, I conceded that would also accept a single ride metro card as payment. Find out what happens at this thrilling event. Until then, to wet your Warburton appetite, why not check out his bodacious blog at http://warburtonlabs.blogspot.com ?
Posted by David B. Levy at 8:50 AM

Tom certainly is a great character. Not only was he an absolute pleasure to meet, he also seems to radiate exactly the kind of energy that has allowed him to do all the things that you list there David, as well as a great source of inspiration. As for the Kidscreen summit, I'd hate to miss the Q&A you're having, unfortunately I can't justify the cost (yet). Will you be able to post a transcript or video of the event?

I jumped up and down with excitement to hear about the event....and cried when I realized how much it cost. =(

You speak of Tom so highly and it's easy to see why. His attitude OOZES positivity (you can see it in his body language) and he's definitely a person I, and I'm sure many other people, aspire to be. All of the anecdotal experiences have really helped to ease the fear that one, I suppose, would normally have making phone calls or simply going up to someone and asking for their advice. Tom takes risks and exudes the confidence that Jim Arnoff has always encourages in his students.

Great post, Dave!! Congrats on the event!! I would love to attend, but like everyone else, the cost is prohibitive. I find that is the case with most festivals these days. There are so many I want to go to, but the cost is just too high. I am forever grateful that the Ottawa Animation Festival remains within the local animation community's financial grasp.

I agree with the price tag issues...it is what has kept me from attending until this year. When you do an event at the Kidscreen Summit it comes with free attendence.

I suppose the costs are so high because it is assumed that network folks and production company presidents are the people who attend, not really us starving artist types.

Thanks for the heads-up on the event, David! It is possible to go to the Hilton and try to hold down a schmooze table in the Lobby lounge... Thanks to you and Tom for the great advice. It's always been my experience as well, to SHOW UP, and get involved somehow. It's how we get to know each other. It seems so counterintuitive for us 'artists' to get out of the studio and find a community, but we really need it. Thanks to you and ASIFA!
cheers, Robert

We not only lost a number of studios this year, but we seem to be losing the ANYMATOR, the ASIFA East newsletter. It makes it harder to find articles to publish or pople to interview. (As you may be guessing, I'm not in favor of this.)

We had to trim back on the newsletter this year due to budget issues. We will do a June issue, however. But, we did bump up the website and add the exposure sheet feature which offers fly-on-the-wall reviews of most NY animation area animation events...and allows for people to post comments/feedback.

We are going to make further enhancements on the website too... and are still figuring out how to keep the newsletter alive to some degree... maybe with having a digital newsletter half the time...

thanks for the feedback on this...

A digital newsletter is a very, very sensible thing to have in this day and age.

As an ex Tasmanian I'm all for the saving of trees and I, for one, would welcome and prefer it - particularly if it means an increased distribution of reading material.

Thanks for weighing in on the newsletter, Elliot. Its an open issue. This year was a "catch our breath" year to better make our budget. We're going to see how our finances are at the end of the year... a digital newsletter makes sense, but, that might be redundant with an expanded website as we have planned. We shall see what makes the most sense.. but, we will bring back the articles, interviews, and news in some form.

Perhaps a monthly or bi monthly email directing folks to updates and articles/interviews on the site would be in order then.

A few notes from the President and such.

I suspect folks head over to the home page when they remember and are perhaps missing a lot of stuff.

Even better to the blog where there can be some discussion.

There are two email blasts (one asifa's and one that is a private group) that go out regularly that give site updates (usually focusing on event reminders, but can be expanded to other news/articles bulletins).

We have lots of groovy plans for the site but, we always create our next agenda based on what we can sustain as a volunteer group with limited help, time and resources.

I'm not sure I get much in the way of blasts...