Perfection vs. Mistakes and Slickness vs. The Human Touch 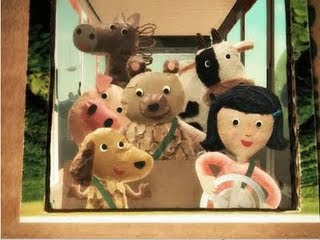 I recently interviewed Bill Plympton for my next animation book. We were talking about directing when he revealed an important part of his filmmaking approach: "I love mistakes. Mistakes are cool. They add a personal touch." He continued, "I want to have a good time making a film, but when it's done I move on to something else and get the next one out there."

In other words, accepting mistakes is not only an integral part of Bill's filmmaking approach, it also allows him to enjoy the process and to be uber productive. He mentioned Richard Williams as his polar opposite, somebody who had sought to make the "perfect" film.

But, most of us animation people know that in the Mt. Olympus of Animation Heroes there is room for both approaches and everything in-between. There's lots of examples out there. Chuck Jones directed brilliant shorts with a very structured process that entailed him making most of the key drawings himself. Bob Clampett's approach gave his animators more freedom, inviting more spontaneity into the production. Both directors produced great work, the difference being that Chuck's method discouraged mistakes and Bob's method invited them inside and gave them a cup of coffee.

Cartoon Brew recently posted a collection of animated shorts made for They Might Be Giant's new children's music CD. Among them is a gem of a film called "Electric Car" (click title to watch video) made and directed by Ru Kawahata and Max Porter, a married couple working out of their home studio. Today, instead of discussing the pro or con of mistakes, it might be more relevant to phrase it as whether the human touch is visible or not.

On one hand there is the Pixar CGI model, which works to achieve a look that shows no traces of the artist's hand, even though some of today's best artists work on their films. This "perfection" has grown its own polar opposite and that can be seen in the type of low-fidelity work that Ru and Max are honing with their films. In their vision, the texture, warmth, and rough edges of cloth and cardboard are presented in all their charming glory. The end result is a celebration of 2D space along with the old school ways of adding depth through multi-plane levels. For more low-fi work of the highest quality check out any film by PES.

So pick your poison: mistakes or no mistakes, slick or low-fi. There's room for everything and we've only just begun to see ways that they might be combined for good effect.
Posted by David B. Levy at 9:04 AM

Pes' films may have a hand made feel about them, but I think they're very slick...

I think PES and Max & Ru's films could all be called "slick," but not at the expense of the human touch. Their use of real materials gives their work a hand-crafted look. The slick part is their mastery of craft, in my opinion. But, its not the "no humans touched this" slick look of CGI.

John Hubley used to call mistakes "happy accidents" and he often built his films around them. At times, he'd order reshoots for camera errors, then ude both takes within the film. Faith was great at integrating the scene with the "happy accident" during the editing.
I've followed suit and used the same credo. Unfortunately, working on a computer affords too much opportunity of "fixing" those mistakes.