The Smarts of Saldanha 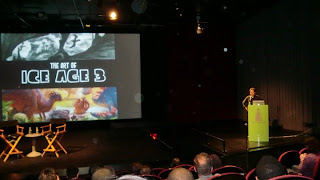 Last week I went to a School of Visual Arts event: Ice Age: Dawn of the Dinosaurs: An Evening with Director Carlos Saldanha. The young director, who began his education in the computer animation department at SVA, has directed a handful of successful features during his long time residency at Blue Sky. His career is of particular interest to me since we attended SVA at roughly the same time. Unfortunately we had never met because the traditional animation department never mingled with the computer animation department. And, at the time, a career doing animation on computers was the last thing I wanted to do. How ironic that I now make my entire livelihood staring at my trusty Wacom Cintiq.

But, what I could relate to were Saldanha's career stories. To start with, he moved to NYC from Brazil at age 16 to attend SVA. But, travel alone doesn't tell the whole story of his ambition. As a student and a teacher I can attest to some students that traveled half way around the world and had no more drive, passion, or work ethic than a piece of aluminum siding. But, Saldanha was different. His former instructor at SVA told us that while most students delivered 10 seconds of animation in the semester, Saldanha completed one and a 1/2 mintutes.

"I couldn't believe that there were thirty computers in that room and nobody was using them. Everyone would just leave at the end of class. If this room of computers was in Brazil, people would have been kicking and screaming to get in there," Saldanha recalled. With all those empty computer stations sitting around, he was able to network them together––allowing him to achieve better results out of the slow machines.

A student in the audience asked Saldanha if traveling to NYC had made the difference. Was it the secret to his productivity? "No," he answered. "It could have been the same story if I had come from the South Bronx. The point was that I had no access to computers and then I did." In other words, Saldanha was in that breed of student that appreciates the opportunity before him. He seized it, worked his ass off, and went on to achieve big things.

His next important career moment came when he was about to graduate. He had the opportunity to work at the big shops in Hollywood, but he saw something special in Blue Sky, which was then a fledgling studio. He saw the chance to grow with the smaller company, believing that it had great potential. "I wanted to be their soldier, helping them achieve their dream to do big things," he said. I love that Saldanha had a philosophy about where he wanted to work. So often, young graduates don't even dare think about where they want to work. Instead they simply look for any openings anywhere. And, obviously, in today's economy, you can't really blame them. But, it would be good to remember that when looking for your first break, it is best to start searching where you want to work. Who is doing the kind of work you'd like to be doing?

His final career story was how he got his first opportunity to direct. He had been animating on commercials for a while when a commercial came in with a lousy budget and schedule. Nobody else wanted to touch it, so Saldanha volunteered to direct the spot––fitting it into his already busy schedule and at no extra compensation. And, with that sample under his belt, he became a director heading down the road that would lead him to helm many successful features at Blue Sky.

As much as it is useful in a blog entry to simplify someone's journey into three career moments, it really isn't as simple as that. These are not a series of plug and play moments that anyone can graft on to his/her own career and expect the same result. But, if I had to boil down Saldanha's path to success I would say that he worked harder than anyone else and took fate into his own hands to help nurture (what would turn out to be) his most important opportunities.
Posted by David B. Levy at 6:48 PM

this is like deja vu all over again. in the little and unverifiable research i've done, some personal meetings and just plain common sense this is the same story as eric darnell, mark osborne and henry selick.

all of these animators created personal projects on the side and, because each of these artists are so good and each project was so freakin' good, opportunity came their way.

years ago on my own time i created the opening to the asifa east festival (during linda's tenure) and that led to mtv asking me to pitch. then a job directing a tv pilot came my way that led to a bunch of big awards and and, finally, an option. it didn't go any farther then that but it did get me some cool gigs and an insatiable desire to do something better.

It sounds like the old quote, "If you want something done, find a busy person to do it," applies to Carlos Saldanha.