The Ethics of Indies 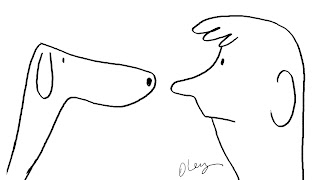 It's absolutely essential that independent animators promote their own films. An interesting by-product of this is that the more successful indies get, the likelier they will have opportunities to curate screenings and programs where they become the barometers of taste, deciding which filmmakers make the cut and which one's don't. Is this an ethical dilemma? I know a few filmmakers who believe so, but, I'm not so sure.

On the plus side, when an indie develops the clout and connections to create new venues to screen animated films, it throws a spotlight on the other included filmmakers who benefit from the exposure. This is a gain for the programming filmmaker too, because by including other indies in the event, it helps ensure a larger audience.

Part of me asks, if not an indie filmmaker programing such an event, who would? Who else would have such a knowledge of animators and their films? A festival programmer is the easy answer. But, festival programmers already do that, through the more democratic and less biased method of a jury or selection committee. There are a few other non-filmmaker and non-festival programmer types who know the scene well enough to program screenings of indie animation, but without having a film in the mix themselves, it's not as likely that these folks could devote the time and energy to doing so on a regular basis.

On the negative side, some argue that the animators producing and programming their own events are playing favorites or shutting some artists out. But, I think that's too easy a criticism to make. To program such an event is to automatically narrow down selections. The top (most prolific and most awarded) independent animators in New York City happen to work with adult themes, making edgy films with subjects of humor, sex, and violence. So, when they program events, you can be sure that they are going to round out the film list with similarly themed works. That seems pretty natural to me. Besides, it would be quite odd to wedge in an indie children's film into such a program.

If the top indie animators have a certain power over the scene, it is one that they have earned simply by working harder than everyone else. And, not just harder in that they make more films more often. They also work equally hard promoting those films.

So, is this an ethical dilemma? Whatever the answer, nobody can deny that some stellar filmmakers of yesterday and today have not received the attention they deserve. There's no single easy way to fix that injustice, but as a move in the right direction, ASIFA-East is planning at least two retrospective screenings per year (from now on) to help re-introduce the community to some amazing talents. Stay tuned for more details.
Posted by David B. Levy at 3:49 PM

Perhaps I am missing something. You need to better explain how an ethical dilemma arises when someone is asked to select films she most appreciates to fit into an alloted time for a program. Did you actually have a conversation with someone who thought this was unethical?

Anyone who really sees an ethical problem here should go out and create their own program and exhibit it. (In this case, you don't need to have earned respect through hard work, you just need to find the means to produce an exhibition (which doesn't have to be hard work).)

A democratic solution only creates a different set of problems (who are the jury, judges, etc? what guidelines are they following in their judgement?).

Yes, I have heard from several indies who believe that filmmakers programming such events is unethical. So, my post is sort of an answer to that or speaking to that issue. But, I agree with your solution. Everyone is free to try to get their own screenings off the ground.

I think programming your own films is a little crass, but it's not unethical.

I think the biggest problem is that if the same people program the same filmmakers into all their events, it becomes very boring. After a while, you've seen all those films. I like how our ASIFA jury screenings mix it all together. It's bit more exciting that way.

Perhaps selling yourself is crass. But I don't know of any successful artist who doesn't sell and promote herself.

Programming the same cycle of films over and over again might, indeed, get boring. But unethical? And if programs are, in fact, boring, then don't go!

Complaining about something like this seems to me that this person is too busy talking, and not busy doing something about it. (I recall your recent post about Carlos Saldanha.)

What does a short film screening have to do with "selling yourself"?

If you're organizing you're already promoting yourself.

Curating your own work is like hanging your own paintings in your house. Sure, people do it all the time -I find it just a little distasteful.

Whether someone does it not, I don't really care, but it's not something I would do.

Programming a screening is a creative statement in itself. A couple of Chris Robinson's competitions at Ottawa 09 were better than the sum of the individual films. Maybe one or two pieces were highlights, but the impact of the entire 90 minutes was unified.

Do the other pieces in a presentation of shorts just become window dressing for artist's film? Usually, they do.

Most of the artwork hanging in our home is mine, and I am very crass, so you are right.

Hello there. Long time fan of this blog. However this post gave me pause. I agree with Mr. Tsouris. This needs to be be better explained. As of now, it comes off as contradicting, the equivalent of a puppy chasing his tail (or snake eating its tail if you want to get bleak). Now I am not an animator, but as a fan of the NY animation scene, I clearly don't see what you see. In essence what I am taking from this is that, you've got a problem with animators (the awarded ones) creating their own screenings based on their own 'barometer' but to 'fix' that you're going to create a screening series of your own based on your own tastes? Isn't that running around in circles? I hate to put you on the couch but what are you really upset about? That the successful animators are are free to do what they want? I didn't realize we were living in One Nation Under Animondays. To echo Mr. Tsouris, if it bothers you don't go. Anyway, just wanted to put my two cents in here. Keep up the blog.

P.s. I love the drawing on the top of this post.

Glad you enjoy the blog. To clarify, it is not my position that the indies that make these screenings are doing anything wrong. I am reporting that I've heard others think it is an ethical issue, but I argue against that in the blog.

Yes, all indies are free to make screenings and program events. I don't think anyone is victimizing anyone. But, certainly great talents have been left out in the shuffle, for whatever reason. So, with the platform of ASIFA-East, we can program so good events that remind about some unsung heroes.

everything about this blog makes me thankful that i'm no longer in dave's self righteous sva class where i'm forced to listen to his version of ethics, which clearly only make sense to dave.

sad thing is this post will probably be deleted lke always whenever anyone criticizes this crap.

Hi Jackal,
I can see you didn't have a good experience in my class. My SVA experience wasn't perfect either and I had classes that could have served me better too. We probably have a lot in common. I wish you had come to me during the semester to let me know how you were feeling.

Hello again. If it's not your position that indies are doing anything wrong than why blanket label it as an "injustice"? And why label your retrospective screenings "as a step in the right direction"? Correct me if I am wrong but it seems like your opinions on this matter are otherwise. And that's fine. Everyone's got opinions...it would just be nice if we stood behind them. If I knew that the animation screenings I enjoy were so wrought with behind-the-curtain drama I probably wouldn't be able to enjoy them so. To quote a favorite writer of mine: "A big part of being authentic is being open and large enough to keep your tailbone at the dinner table and your eyes on the television in the next room, unapologetic and charming in your duality. Yes, I'm watching the game, but God I love your lamb!"
P.s. That drawing reminds me of my dog!

Hi Back to the...
The injustice I'm thinking of is that we have so many good filmmakers in this city (some going back years and years) and not all of them have been as good or as hard working at self-promotion as some... so the opportunity ASIFA-East has is that we can help spotlight some great work that might not be known as well as it deserves. That's all.

Hope that clears some things up. And, you are correct that I could have been clearer on this topic. Sorry for any confusion.

Thanks for clearing the air. As a longtime ASIFAGoer, hopefully I will finally meet you at the jury screenings in March (I hope it's not as controversial as last year's...and we all know what happened at last year's).