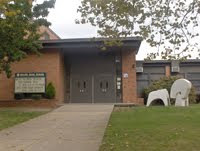 *image above, my Long Island grammar school, also known as the location of my first commercial art/business venture.

Because I'm currently co-writing Bill Plympton's "Art of" book, I'm spending a lot of my time editing the words of the master showman of indie animation. Working on the manuscript has caused a couple of stories from my past to bubble up in my mind, and I thought I'd share them here.

The first steps of my creative/business life was producing and selling my own comic books, while still in the fifth grade. I charged five cents for each Xeroxed five-page issue, which were mostly my takes or spoofs on Batman, He-Man, and Inspector Gadget. In one month I raked in $50 of sales (that's a lot of sales at five cents each!), which kept my belly full of gummy bears, and my hands full of baseball cards and real comic books the whole summer.

I remember once, when I was selling comics at lunchtime in the school cafeteria, the much respected and feared phys-ed teacher walked in and grabbed my merchandise out of my hands. My heart thumped loud in my chest as he flipped through a comic sporting his fierce poker face. Then he roared loud enough to get everyone's attention, silencing the room by announcing, "David Levy is selling comics! You should buy one."

But other teachers and administrators were not so kind. One teacher chastised me for my comics' poor spelling and grammar, and the assistant principal barred me from selling the comics in the school. Happily I took that literally and moved my sales operation to the school playground where every recess I had a line of kids (their pockets heavy with quarters) ready to buy my latest issues. My success was not lost on two other artistic students who tried to compete with their own comic book empires.

I went home and complained to my dad about my new rivals, and his answer was to fire up his compressor and add a dash of air-brushed color to adorn the covers of my comics. Now I had something my competitors didn't have. I needn't have worried. My rivals only managed to produce an issue or two, while I had stacks of new comics each week. Eventually the assistant principal caught me selling again and explained that the school playground was still the school grounds, thus marking an end to my comic book adventure.

So what? I had animation on the brain, anyhow. And I went through a pretty typical animator's right of passage, attempting to make my own animated cartoons on the family super 8MM camera as well as on a new circa-1985 video camera. The video camera couldn't shoot a single exposure so the film route was the better choice. By the end of high school I made about six one-minute cartoons, the final two of which were reasonably sophisticated by my standards at the time.

One day I went to my high school's AV department (of which, I was NOT a member, thank you very much) and ordered an 8-mm projector to be delivered to my Spanish class. Imagine my teacher's surprise when, right on schedule, there was a knock on the door, and a projector cart was wheeled in. "There must be some mistake," the teacher protested. I stood up and confessed that I had ordered it because I thought it would be fun if I could show my new cartoon to the class. The teacher, a fairly stern woman, was caught temporarily off guard and curiosity got the better of her.

"Okay, thread it up." she allowed. Before you could say, “Rushmore's Max Fischer,” I had projected two cartoons, and even though the second one got stuck and started to burn, it still counted as my first public animation screening. Just as you don't have to ask permission to make an animated film, I found that a similarly bold move could help get the film seen by an audience. The best part was that I got to try out being an animated-film maker early on, and thus could confirm that I truly had been bitten by the bug (even if my talent had a long way to catch up to my enthusiasm––and still does!).

What are your formative stories? Feel free to share below in the comments!
Posted by David B. Levy at 2:07 PM

Great story. Thanks for sharing this. very inspiring and fun to read and imagine it all happening.

Oh my goodness, these stories are absolutely delightful!!!!

Gosh, Dave, now I feel like a complete failure. I was merely drawing un-anatomically correct people, clothing designs and doodles of the Inner Harbor at those ages. I was more devoted to my other passion: music.
And I never had the business sense that you did. :) Wow for you!

That's so adorable! I imagined a little child with your head - beard and hat. You're such an entrepreneur!

I never sold my school work, but I did always weave artwork into my assignments. I did a World War 1 piece in crude stop motion using wrestling action figures, lol.